What They Don't Want But Need 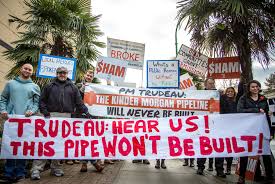 The standoff between Alberta and British Columbia has put Justin Trudeau in a bind. But he put himself in that bind before the governments of the two provinces decided to go to war over the Kinder-Morgan pipeline. Trudeau argued that pipelines could be built if Canadians paid a carbon tax. Tom Walkom writes:

Notley brought in a carbon tax. Trudeau approved Kinder Morgan. This was supposed to be the model of how measures to reduce greenhouse gases could coexist with economic growth.

The bargain didn’t work. In part, this was because opposition to Kinder Morgan was based on more than climate change. But in part it was because the premise behind the bargain was false.


The rub is that Canadians don't want to pay the real cost of kicking carbon:

The Trudeau government announced a national carbon tax to reduce emissions. But experts say that the tax as planned is far too low to get the job done — that it won’t discourage Canadians from high-emission activities, such as driving gasoline-powered cars.

The government’s caution is understandable. Fighting climate change carries a political as well as an economic cost.

But if climate change is as dangerous as scientists say, then boldness is required. Compromises, like the one behind the ongoing Kinder Morgan political soap opera, just don’t cut it.


And Mr. Trudeau refuses to tell Canadians what they may not want but need to know.

While fighting climate change may have a political and economic cost, not fighting it does too. Current politicians think the cost of a addressing the problem is higher than doing nothing. I think they'll be proven wrong.

The physics behind climate change is far more robust and predictable than calculations of political or economic risk. And those elementary laws of physics tell us that if we fail to act now, we're all screwed and so are our descendents. I don't see an economic or political cost that outweighs the survival of the human species.

I agree, Cap. It's pay me now or pay me later. And later is much more expensive.

BC has had a carbon tax since 2008. Now at $30/ton, it's too low to be effective in reducing GHG emissions. An effectively high carbon tax would hurt the economy, so Govt is unlikely to raise it. Both Govts seem have the delusion that they can grow the economy and reduce GHG at the same time.

They can't have it both ways, Hugh. And they refuse to acknowledge that fact.

There is also a problem with the proponent, Kinder Morgan. They have had the worst record in the US for safely maintaining pipelines.

This is on top of the fact that taxpayers in general are fed up with subsidizing oil proponents in greater and greater amounts of tax money.

Lastly, no one who is a serious thinker can deny that reducing GHG emissions is absolutely necessary, and sooner rather than later.

Problem is that politicians are ALL short term thinkers. They are only interested in the next election and getting themselves re-elected, and to heck with those suckers out there that voted for them. Another factor is that federal and provincial tax structures more and more favour the richest persons and corporations. By the time anyone figures out that a robust carbon tax in necessary, the 90% of common folk will no longer have the money to pay for it.

The federal plan is to raise carbon tax to $50/ton by 2022.
That would be about $8 per gas tank fill up, compared to about $5 now.
I don't think that will do much on its own. But the price of gasoline may rise too.
So I expect gasoline consumption could come down somewhat, or at least level off.


Of all the areas in which Trudeau is not to be trusted, bitumen and pipelines are the worst. During the election he acknowledged the National Energy Board was a 'captured' regulator that jury-rigged its decisions, inevitably in favour of the industry. He was going to clean out the corruption, first thing. Then he was going to uphold the right of First Nations to control what crosses their territory. He topped it off by promising that no pipeline would be allowed without 'social licence,' the support of effected municipalities and communities. He promised that on heavy oil, as on everything, his government would absolutely 'follow the science.'

They were barely sworn in before Garneau, Carr, and Morneau began dropping comments that suggested that pipeline was going through regardless of anything Trudeau had promised. Carr was another Joe Oliver only under a different banner. Trudeau proceeded to show us the worthlessness of his solemn promises.

There were a host of other collateral matters that showed Ottawa really didn't give a shit about coastal BC. One example was when Dame Cathy's enviromin approved the devastating chemical concoction, Corexit, for use in BC waters as a spill dispersent despite everything that's been learned about the product from both the Exxon Valdez and Deepwater Horizon disasters.

From this it's pretty easy to extrapolate the sincerity of this government and its commitment to tackle climate change. Trudeau has a pattern of going after the low hanging fruit, the shiny thing, and then ducking the tough calls. He's a fixer, a hustler, not a leader. In this, he isn't all that much different than the guy he replaced.

I agree with you on all counts, Lulymay.

There is no painless way to get us off carbon, Hugh. We just don't want to pay the price. It's like refusing to go to the dentist when we know a tooth can't be saved. It's eventually going to hurt to pull that tooth.

When it comes to the eenvironment, Mound, Trudeau talks differently than Harper. But the results are the same.

So Canadians are supposed to be gouged with revenue-neutral carbon taxes (meaning Canadians pay a bigger part of the tax bill) so that Alberta can turn 3 trillion barrels of bitumen into atmospheric carbon by shipping it to China - which has no plans to reduce emissions until 2030?

What a crazy scam! It does nothing to reduce global GHG emissions, but allows upper-crust moochers to gouge even more wealth from the people. Someone should tell the Deep State and their minions there is a finite amount of wealth they can loot from the Western economy before they cause it to collapse - probably into world war.

In the meantime these crazy Big City Liberal weasels should just shut their pieholes until they come up with a plan that will actually reduce emissions. Carbon pricing won't do anything. The price of oil tripled during the 2000s while GHG emissions skyrocketed. If a 200% effective carbon tax doesn't work, no reasonable carbon tax will work.

What will work: a) government spending on green-energy infrastructure including making wired and wireless internet much more affordable - funded by reversing 40 years of tax cuts for the rich; b) green and social tariffs imposed on third-world oligarchs to redistribute some of the wealth and force them to invest in green; c) regulations that target the most egregious of carbon emitters to gradually phase them out - like the Alberta tar-sands; d) green-energy subsidies phased in over a 30-year period that will eventually make clean energy cheaper than dirty energy forcing GHG emissions to zero.

You're right, Gex-X. The problem is complex. Simple solutions won't solve it.