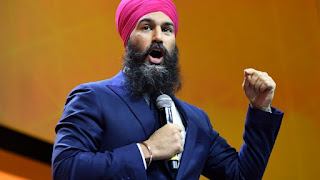 Michael Harris wonders if Jagmeet Singh is a true progressive. That used to be Justin's Trudeau's mantle. But he has disappointed many who voted for him:

The prime minister reneged on his much ballyhooed electoral reforms promised in the 2015 election, prompting national icon David Suzuki to call him a liar.

Veterans have been left speechless by Trudeau’s court action against them, which was started by Stephen Harper.

And after the Trudeau government gave the green light to the dubious Site C dam in British Columbia, environmentalists as a group are wondering who is the real Justin Trudeau? The poster child of the Paris climate change summit or the guy who told Texas oilmen in Houston that, “No country would find 173 billion barrels of oil in the ground and just leave them there.”


Singh appears to be staking out the same ground as Trudeau. Will he be able to convince Canadians that he will do more than repeat Justin's rhetoric?

He has one potential problem. He wears a turban. That shouldn't make a difference. But, for some Canadians, it will. There are, however, some substantial differences between Singh and Trudeau:

For one thing, his personal story is a saga of true grit, immigrant style. Singh has gone from the kid in the turban that people snickered at in the plaza, to winning the leadership of a federal political party in which he was only given a two per cent chance of success.

Growing up, he helped keep his own struggling family together and managed to pick up a law degree along the way.

Unlike Trudeau, Singh knows what it’s like to feel unwanted, insecure and poor. And after he personally escaped all that, he didn’t forget the ones who have not.


Like Trudeau, he is fluently bilingual. But, in Quebec, he's not a native son.

Is he a true progressive?  We await the future -- which will give us the answer to that question.

Email ThisBlogThis!Share to TwitterShare to FacebookShare to Pinterest
Labels: The NDP Convention

His reluctance to address several contentious issues, including the Israeli mistreatment of the Palestinians and bitumen pipelines suggests to me that he is hewing to a very cautious course, Owen. My hope for a renewed NDP is quickly fading.

I agree, Lorne. True Progressivism may be a relic from the mid 20th century.


He's now on the same page as Horgan on Kinder Morgan. That's a start. The Palestinian issue remains a problem

I'll be interesting to see how he deals with Notley, Mound.