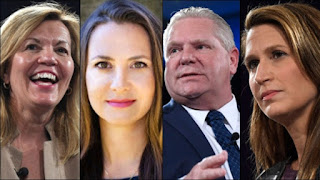 Ontario’s once-proud PC party may emerge from this renewal process having regressed — with nary an idea for the future economic, educational or technological challenges facing our province. Four candidates (three serious contenders, one single-issue contestant) were behind the microphones at TVO.

Quite apart from condemning one another, the candidates were at war with themselves — contradicting their own past positions and demolishing the party platform that, until last month, the party had put forward collectively as a carefully considered blueprint for governing Canada’s biggest province.


The platform was supposed to take them to victory in the election -- which is now three months away:

A proposed carbon tax? Repudiated by all with astonishing alacrity, even though it funds the party’s promised $4 billion in tax cuts and assorted election sweeteners;

A sex-education curriculum updated three years ago in our schools? Condemned by all with unseemly passion, based on the fictional claim that no parents were consulted and that parents must always have the last word — as if teenagers hang on their every word, because father (or mother) knows best. While joining in the chorus of condemnations, Mulroney alone mused that she wouldn’t undo the current curriculum (having lost her backbone on carbon, she recovered her voice on sex ed);

A higher minimum wage? Bad for business but worse for workers, Ford argued with a straight face and steady gaze. All candidates condemned the $14 minimum wage brought in last month and assailed the Liberal government’s law raising it to $15 next year. Oh, and dissociated themselves from the party’s platform promise to phase in the $15 target more gradually, by 25 cents a year until 2022 — still too fast, according to Ford and Elliott, who were having none of it (only Mulroney stuck by the platform’s slower 2022 target).


Cohn warns that chaos may be a winning formula. Donald Trump seems to thrive on it these days. Nevertheless, it's utterly disheartening to realize that Doug Ford is calling the tune:

The remarkable repentances of Elliott and Mulroney — who have long coasted on their images as progressives — must be a bitter pill for them both to swallow, and seems like a poison pill for many other Tories. Not just . . . carbon but consent issues . . . [have] taken the party back in time to revisit the sex-ed controversy that Brown tried to put behind them — until a sexual misconduct scandal undid him.


Tanya Granic Allan, the candidate of the religous right, only has one issue -- scraping the sex ed curriculum. These days, the Tories seem fixated on sex.

And marching backwards.
Posted by Owen Gray at 9:08 am

Not really hard to see the reason. The platform they were running on was for Ontario voters overall, to sell themselves as a reasonable alternative to the Liberals. Right now they’re just competing for party voters, and the party is way more regressive than people in Ontario on the whole. They want the red meat of social issues and anti-tax rhetoric.

Sad part is that once the leadership race is over, they’ll swing right back in pretending to be far more moderate than they really are, and most of the media will be happy to help them sell the “pivot”.

I suspect your analysis is absolutely accurate, B.J. But I also suspect that they'll lose a few members on the way.

.. I have an older sister who's an education exemplar... Seperate School Board.. now retired. i am as fearful of engaging her re 'curriculum' about as much as she would prefer not to go one on one on a basketball court with me for money..

But here cometh the political aspirants, wannabe's & f'twits.. to tell us all not just how to teach our children well.. but what we should teach them & when. Kinda like a totally fake Dr Spock on paediatrics.. Now we (the boss n I n two dogs) caught the entirety of Steve Paiken's excellent roundtable last night.. a panel if you will. It certainly was not debate.. and the clear winner was... drum roll .. Steve Paikin.. Yes, the host shone the most..

Storming into 2nd place came.. Doug Ford ! ! (frighteningly) Somewhere back in the confused pack.. came the very decent earnest mudder ms Elliott.. then ms Mulroney plodding along.. and the other woman.. apologies but I do not know who the heck she is.. or whence she came from.. nor do I care.. ok, not fair.. I am about as curious about her as I am about where Patrick Brown relocates to.. or his sister's middle names

I don't wish to pontificate on the entire scope of the hour... it was just curriculum that reached out grabbed me by the leg.. and started chewing. I know what I don't know re education.. and that's an entire ocean.. but darned if political animals aint the smartest on the planet eh.. educating us ignorami us's.. bringin us all reeligeeon... n book learnin.. Once I wuz ignotant.. but now I is savored... hell a loo ya eh!

It strikes me, sal, that it's wise to stear clear of those who claim God is on their side. I have likewise been impressed by Lincoln's somewhat tentative hope that he was on God's side.

Marching backwards could very well be the understatement. Is Patrick Brown really going to re-enter the race? Man, I could use a good laugh!

The word today is that he has been removed from caucus, zoombats. The party seems to be intent on burying him.