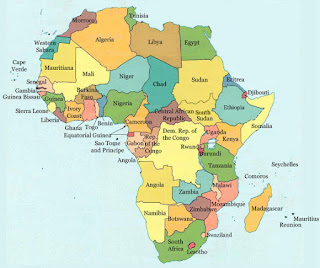 Leaders in the West are appallingly ignorant of Africa and its history. Donald Trump is. But he's not the only western ignoramus. Gerry Caplan writes:

Canadians need to learn this lesson pretty badly too, as former Toronto mayor Mel Lastman demonstrated some time back. Setting forth on an official visit to Kenya, Mr. Lastman fretted publicly about the cannibals he was certain he'd bump into on the continent.


Men like Trump and Lastman blame Africans for the problems they face. But they know nothing of that continent's history:

The slave trade robbed Africa of 12 million of its most productive subjects. At the same time, it created a new class of slave-owning planters in America who provided a powerful engine to drive the U.S. economy. Without them, the rich countries would not be so rich.

Eventually, Western intervention turned into formal colonialism, with the European powers each arbitrarily claiming authority over certain African territories. Subsequent examples of Western turpitude are almost literally endless. Take the Congo, for example, the West's favourite incarnation of the heart of darkness. But the darkness was in the heart of its Belgian rulers, who, in the pursuit of rubber, murdered some 10 million of the 20 million existing inhabitants, one of the greatest genocides in human history. When, after almost a century of slaughter and destruction, Congo became independent, there were hardly any experienced or educated Congolese to run the country.

Here's another example. For many years, in return for loans to African governments from the West, orthodox capitalist policies were demanded. In Zambia in the mid-1980s, HIV/AIDS was just beginning its ravage of Africa. Loans were provided, but only on the proviso that no expansion of public services was to be contemplated. A country that so badly needed nurses was forbidden from hiring any more nurses. HIV was free to run amok, and took full advantage. In the absence of the needed human resources, about a million Zambians now live with HIV/AIDS, while the country has 600,000 orphans.


We in the West have a long history of blaming the victim. The ignorance of men like Trump and Lastman doesn't erase that history.  And those that don't know that history will repeat it.

Image: GNN Liberia
Posted by Owen Gray at 9:51 am

Not all white people are as ignorant as Trump and Lastman, Deacon. But when the ignorant obtain power, they become dangerous.

It is good to be regularly reminded of the terrible things colonialism did, Owen. The white man's arrogance often knew no bounds. And clearly, there is still much to be done to make amends today.

I'm talkin' throughout history and up to the present day. Almost all of the tragedies, calamities and cataclysms that have had global repercussions over the past century or so have been at the hands of feckin' white people either directly or indirectly.

Owen. the history of man is based on the connection between slavery and unneccessary wealth. whether it was the Roman and Egyptian empires, the European empires or the American and Chinese empires today. they were all built on slaves or as we who are more civilized today refer to as outsourcing and temporary foreign workers. hey we have to be more civilized, we don't slaughter them or round them up to take home anymore.
there have been a few isolated cases of individuals bucking the trend for political gain like Julius ceaser who limited land holders to 20% slaves forcing them to hire the million or so starving roman citizens.
I read two articles recently where business is reluctant to train Canadian workers because they will just leave for a better job. the other article said that Canadian workers feel no loyalty to their employers because 10 year veteran workers make the same as new hires or maybe a dollar more if they are lucky.
here is a radical idea. imagine a company that pays a base wage but splits the profits between owners and workers with the workers share distributed as one share for each year worked. I wonder how many local workers would suddenly be interested in working there.

Ah, the "good old days" when white was right and the rest were, well shit holes. Sound familiar? The history we were taught was not the real. It was White filtered. Colonialism was abhorrent not a case of bringing civilization to the "rest" of the world. Enforcing the current white "values" on every country, while stealing their resources. Things have not changed too much.

Those who believed in The White Man's Burden have left a trail of misery in thier wake, Deacon.

An interesting suggestion, bill. I suspect, though, that those who still tout the benefit of
"unpaid internships" would raise some objections.

Every time Donald Trump opens his mouth, Mac, I'm reminded of that fact.

Owen, I agree with your post and the comments about slavery. There can be no justification for it. Problems in Africa are much more complicated than one can explain in a post such as this. No doubt that Western countries still interfere for economic and military reasons.

There are a couple of home grown problems in several African countries and elsewhere in the Third World. First is ugly, in-your-face corruption. Yes, war lords and despots probably learned it from colonialists but it is now self inflicted. The response to corruption tends to be violence or magical thinking or both. Enter the demagogue and the priest, both of whom promote large families. Take Niger as an example; population 2,955,541 in 1955, now 22,311,375. http://www.worldometers.info/world-population/niger-population/ That staggering growth is crippling. There is no way that food production can keep up. Societies collapse from just this sort of pressure.

If there is to be a solution to the population bomb it will come through the empowerment of women. Men, particularly religious men, will not like it.

I grew up in the province of Quebec, Toby, where priests used to promote what they called "the revenge of the cradle." That's why Jean Chretien was one of 19 children. Quebecers finally threw off that kind of stuff. The province now has a very, very low birth rate. In fact, recent governments have been offering financial incentives to Quebcers who have children.