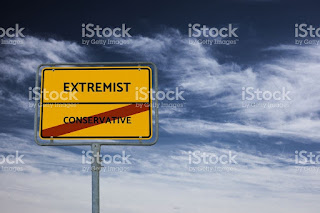 E.J. Dionne writes that there are two kinds of conservatism -- the "tweedy" kind and the extreme kind. Tweedy conservatism

is rooted in an affection for a particular place and its way of life. This conservatism is not always opposed to reform since reforms are often required to preserve the arrangements its exponents revere. Conservatism’s positive function is to warn against measures designed to fix things that are wrong, but whose main effects are to undermine institutions that are widely valued. Sometimes, seemingly sensible changes can unintentionally cause new problems.


Tweedy conservatism was Edmund Burke's conservatism. But Burke's vision has been buried by another kind of conservatism, which Dionne argues isn't conservtism at all. It's extremism, plain and simple:

The tweedy sort of conservatism has been giving ground to the extremists who want not simply to defeat their adversaries but to crush them; who traffic in conspiracy theories rather than in respect for facts and history; and who are willing to destroy the very institutions they claim to be trying to save. This has happened before (as when the white South’s displaced leadership backed the Ku Klux Klan to end Reconstruction after the Civil War), and we are seeing it anew in the age of President Trump.


That extremism was on full display at the recent Conservative Political Action Conference:

Before Trump, it would have been shocking to see Marion Marechal-Le Pen, a leader of the French neo-fascist National Front, appear at the same event with traditional conservatives like Vice President Mike Pence and Sen. Ted Cruz, R-Tex, and also with the president of the United States. But thanks to Trump, European-style ethno-nationalism has become so much a part of the movement that her visit seemed almost natural.


And the head of the NRA, Wayne Lapierre, brought the crowd to their feet:

Shamefully, Wayne LaPierre, the NRA’s top gun who is increasingly becoming America’s extremist in chief, showed few signs of being moved by the slaughter of high school students and teachers at Marjory Stoneman Douglas High School in Florida. On the contrary, he had the impudence to say that those who think it’s time for some modest reforms in our weapons statutes were “saboteurs” and “socialists” using the deaths of young people to forward a dangerous agenda.

“If they seize power, if these so-called European socialists take over the House and the Senate — and God forbid, they get the White House again — our American freedoms could be lost and our country could be changed forever.”


Stephen Harper called the same extremism conservatism. And it is currently on display in Ontario's so called Progressive Conservative Party.

But Trump, Harper and the Ontario PC's leadership hopefuls are all selling snake oil. That should be patently obvious.

Email ThisBlogThis!Share to TwitterShare to FacebookShare to Pinterest
Labels: Extremism, Not Conservatism


I recently spent a little time revisiting how the neoliberal order was implanted in Canada and now holds sway. As expected it began with the Conservatives although it was fiercely resisted by the likes of Bob Stanfield who came out of retirement to condemn it. The real architect of Canadian neoliberalism was Mulroney's finance minister, Michael Wilson, an early adherent of all things Hayek. To Mulroney's credit he kept Wilson's more Social Darwinist instincts at bay. All the time, waiting in the wings, was young Harper who saw nothing more ideal for Canada than hard-core Thatcherism. That's what he had in mind for Canada when he sought high office. Fortunately the Canadian public wasn't on side with Harper's republican extremism and he had to bend to reality. That said, movement conservatism remains alive and well within the ranks of today's Alberta-centric CPC. And there have been losses. Harper sought to shift Canada's political centre well to the right. The Liberals under Ignatieff and Trudeau and the Layton/Mulcair NDP dutifully followed in Harper's footsteps, the Libs becoming Conservative-Lite globalists and the NDP transforming into Latter Day Liberals. Along the way, meaningful progressivism became expunged from mainstream politics. There's no room for posterity in Canada's corporatist democracy. And that's how you wind up with finance minister "Job Churn."

Edmund Burke had his eyes firmly set on posterity, Mound. I wonder how many of today's conservatives know who he was.

Whist I am no great fan of 'conservatism' which does indeed seem to be rearing its ugky head not only in various places here and slightly to the south of us, and indeed across the world, I would gently suggest that the other side of the spectrum whilst perhaps less venomous is not without its faults. In my mind it is not so much the particular flavor of the day that is the problem as the 'extremism' that all political groups seem to fall victim to, Owen. At times I increasingly despair the lack of rational dialog within our political system, and perhaps within society!

I agree, Rural. We seem to be reverting to tribalism. William Golding warned us about where that can lead.