Times Are Tough For Red Tories 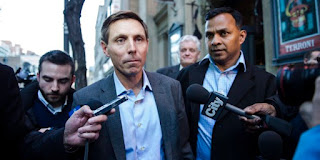 The irony of the Ontario Tory leadership race is that deposed -- now back in the game leader -- Patrick Brown is the only Red Tory in the race. And his opposition is desperately trying to get  rid of him. Tom Walkom writes:

He’s also the only candidate vying for the leadership who is running as a Red Tory. That’s important because the Red Tory blend of sound economic management and moderately progressive social policy is usually the formula for political success in Ontario — for any party.

Now that Brown has decided to fight for his old job, his critics are getting harsher. Interim leader Vic Fideli has kicked him out of the Tory caucus. Tory MPP Randy Hillier has filed a complaint about him with the province’s integrity commissioner.

The Globe and Mail published a complicated story asking whether Brown had entered into a financial arrangement with someone seeking a Tory nomination (the answer apparently was no).

Political operatives, irked that he hasn’t quietly gone away, accuse him of putting his own interests before those of the party — a charge that could be levelled at any politician trying to rock the boat.

When a 23-year-old girlfriend publicly supported him, Brown, 39, was criticized for dating younger women. That’s an accusation that Brian Mulroney, who was 34 when he married 19-year-old Mila Pivnicki never faced. Nor did Pierre Trudeau when he married a young woman almost 30 years his junior.


I was never impressed by Brown. But his saga says a lot about what has happened to Progressive Conservatism. These days, being a confessed Red Tory can be a self inflicted wound.


Provincial politics in our country is a never-ending source of hilarity. How is it when an election nears Ontario party leaders insist on self-destructing? Horwath, she did it. Wynne seems to have done it. Now Brown.

You know what would make it all the more entertaining? Knife play. Seppuku. All three would kneel, take out the ritual tanto sword, and go for it. The last one to bleed out becomes premier. Given that most of the public would dislike at least two out of the three that sounds like a perfectly suitable outcome.

.. we breathlessly await membership tabulations. If the Ontario PC's lurched from 12 or 14 thou.. to some 200 thou.. its wondrous. Show us the names and the money.. Yes, that's right - where is the money? This is an equation a Grade 3 kid would expect an answer to. At 10 bucks a crack, those retail memberships represent approx 1 million 800 thousand or so.. and the money is where? And the new members are .. uh where? Scarborough? India ?

Hope we are not asking too much..

It was Deep Throat, sal, who gave Woodward and Berstein the sage advice to "follow the money." It appears that Mueller has taken the same advice.