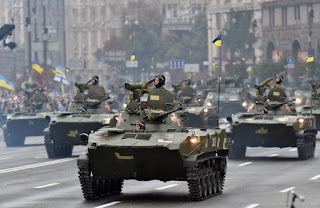 Donald Trump has let it be known that he wants to see a military parade on the streets of Washington. Jonathan Freedland writes:

No need for us to deconstruct the motive behind this instruction. It came after Trump was the guest at France’s Bastille Day parade, where he stood at Emmanuel Macron’s side and watched tanks, gun trucks and column after column of starchly uniformed soldiers. “We’re going to have to try and top it,” Trump said afterwards. (The actual order to military chiefs was phrased in the language of a spoiled child: “I want a parade like the one in France.”)

By his own admission, then, Trump is engaged in a familiar, mine’s-bigger-than-yours, macho competition, with military hardware his chosen measure. Recall the equally uncoded tweet directed at Kim Jong-un last month, when the US president urged someone to tell the North Korean dictator that Trump’s “nuclear button” is a “much bigger & more powerful one than his, and my Button works!”


Freeland believes that there are at least two possible responses to Trump's militaristic dream:

Opponents can react to this in one of two ways. Mockery is the obvious response, seeing in Trump’s desire to display US tanks and rocket launchers on Pennsylvania Avenue the same transparent insecurity as the mid-life crisis neighbour who suddenly turns up with a Ferrari in the driveway.

Or we can be more sober, and regard this as just the latest and potentially most spectacular demonstration of Trump’s authoritarian instincts. Just as he has repeatedly expressed admiration for strongmen in the Vladimir Putin mode, just as he regards the machinery of the state as his personal staff – casually referring to “my justice department” or “my generals” – and just as this week he suggested that those who refuse to applaud him are “treasonous”, so this is yet more proof that Trump’s instincts are those of the autocrat.


Unfortunately, a large segment of of the American population supports Trump's march to autocracy:

While progressives might complain about the banana republic militarism, while fiscal conservatives will worry about the huge cost of diverting all that kit to the capital and while the city itself frets about the damage 70-tonne tanks are liable to do to its roads, a large chunk of US society will want to rise to its feet and applaud.


So what's to be done? Freeland suggests that Trump's opponents take to the streets with their own parade:

If Trump wants to show his strength on the streets, the opposition can do the same. Perhaps it could organise an alternative parade, whose theme is mockery of the would-be despot. And given the neurotic insecurity we know propels this man, I have an idea for the central display. While the armoured cars rumble down Pennsylvania Avenue and fighter jets fly over the Washington Monument, the rival procession could feature a giant effigy of Donald J Trump – with tiny, tiny hands.


That's an excellent suggestion. And, given the number of Americans who have taken to the streets protesting the presidency of The Great Orange Id, it just might come to pass.

Image: Kyiv Post
Posted by Owen Gray at 9:46 am