A Society Which Cannot Offer Its Youth A Future 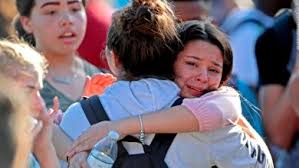 There was another mass shooting in the United States. Barack Obama used to come out and  publicly appeal for gun control legislation. Yesterday, the Tweeting Twit used his standard medium:

My prayers and condolences to the families of the victims of the terrible Florida shooting. No child, teacher or anyone else should ever feel unsafe in an American school.


The soul of compassion. The weapon used was the same weapon used in other mass shootings -- the AR-15. Richard Wolfe writes:

There have been many attempts to tackle assault weapons like the AR-15. When Senator Diane Feinstein, the California Democrat, tried to do that in 2013, one month after the Sandy Hook school massacre, there were 60 “no” votes that killed the effort, including those of 15 Democrats.

Among those no votes was one Marco Rubio, the Florida senator, who told Fox News on Wednesday that now wasn’t the time to talk about gun control. “I think you can always have that debate,” he said. “But if you’re gonna have that debate about this particular incident you should know the facts of that incident before you run out and prescribe some law that you claim could have prevented it.”


The United States is a dying Empire. There are signs of its demise everywhere -- no more so than in the minds of American youth:

For the deeper, sadder truth is that something else is dying with each massacre in a school, church, night club, movie theater or at an open-air concert. And yes, with each gang bullet in Chicago too. What’s dying is the bright light of our teenagers’ confidence.

They say there’s no one more optimistic than an American teenager. That may always have been a gross generalization. But there aren’t many countries where kids are told they can grow up to be president, or a tech entrepreneur, a Nobel-prize winning scientist, or join the Peace Corps to fix the world.

Now we’re teaching them to throw their chairs if a shooter storms into their classroom.


A society which cannot offer its youth a future will not survive.

Image: DemocratsTime.com
Posted by Owen Gray at 9:49 am

Email ThisBlogThis!Share to TwitterShare to FacebookShare to Pinterest
Labels: The Parkland Shooting

Increasingly, Owen, when I think of the United States, all I see is a deeply dysfunction, moribund society. They seem beyond any kind of redemption at this point.

History proves that every democracy can destroy itself, Lorne. That appears to be what Americans have chosen to do -- to tear down their democracy.

Faithlessness is always the rule in a demographically segregated society.
Especially individuals who feel society "doesn't think very highly of them". If one feels society doesn't think too highly of them then that person is not very liable to feel "as one with" the society they're living in.

One can't expect a sense of kinship, or even a superficial concept of "being integral to", the collective whole from such a person.
To them everyone around them is "an obstacle" and "in their way". Hence, the idea of "eliminating some of these 'obstacles'" just may enter their mindset.

My only question: How do these "losers" obtain such pricey weapons such as assault weapons? Aren't such fancy firearms quite expensive? One would expect more in the line of knife attacks or blunt objects being more feasible.

Mass production lowers the price of everything, Tal. These weapons are mass produced.


America's real problem isn't the gun culture. It's a failed government, a "bought and paid for" Congress, a transactional democracy. I did a post today dealing in part with the millions of dollars some senators have pocketed from the NRA. One got just shy of $7-million in lifetime contributions. Self-righteous Iowa senator, Joni Ernst, has only been on the job just over three years and she's up $3.3 million in NRA donations.

Just to soak up my anger, I wrote scripts for three sketches. One is "the schoolyard." A troubled youth sits on a curb. Suddenly he's surrounded by make and female senators, urging him to get 2nd Amendment therapy. A car pulls up and takes him to a strip mall gun shop. The car turns into the schoolyard, drives up to the entrance. The kid gets out, assault rifle in hand. The senators form a line to each side of him. Together they walk up to the school and enter. A drone camera gets an aerial shot of the school. You can hear rapid gunfire. Back to the schoolyard where police cars and ambulances are gathered lights flashing. A reporter challenges a senator asking if it isn't time to get serious about gun control. The senator says it's not the time for that discussion. Let people grieve.

The second sketch is "the hooker." A hooker stands on a street corner beneath a street light. A man approaches. She gives him the usual come on. He isn't buying. She asks him what he does want. He whispers in her ear. She points to a nearby back alley. In the shadows is a senator who comes out. He offers the guy deals - a fat government contract, a military installation in his town, anything. The guy whispers the same thing in the senator's ear. The senator recoils angrily. The hooker yells, "he wants gun control, you old fool." The senator says "do you have any idea what that costs? You can't afford me. Get lost." The man, defeated, shuffles away. The senator recedes into the shadows of the backalley.

The third sketch is the auction. Basically a senator takes a seat on the stage and they bid for his vote on various issues, tobacco subsidies, etc. Finally it comes to gun control. A bidding paddle with the NRA logo is raised. $200 grand. Then a paddle is raised at the back. Some unknown guy bids $201 thousand. The NRA bidder bids $300 thousand. The little guy offers $301 grand. A furious NRA bidder offers 2 million. The little guy has to give up. The scene goes to a smoky, dimly lit, backroom office. The auctioneer and the NRA guy are having a glass of bourbon. The auctioneer asks the guy why he bid such a crazy amount. He said he had to let the guy know he couldn't win, could never win. Otherwise they would be back at the next auction and, eventually, they might wrest control of the gun control vote. Money well spent.

I've never written anything like this before. It's been therapeutic.


BTW, I think Tal believes an AR-15 is costlier than it really is. There are plenty of companies that make "budget" AR-15s that are sold in the $800-900 range. You can also find "kit" rifles that you assemble and finish at home. There are web sites that can show you how to save hundreds of dollars off the going price for a factory gun.

I even found a site that sells AR-15 receiver blanks. Included is a template that shows you where to drill at what dimensions to modify their receiver for fully automatic fire. If you've got a home drill press you can buy the kit, drill the receiver out in under 2 hours, and wind up at the end of the afternoon with a machine gun. And the vendor claims this is legal because you do the modification, not they. (is that right, "they" rather than "them"?)

Unlike handguns, Florida has no waiting period for AR-15s. A quick phone call to confirm you're not a felon, cash across the counter and you are out the door before you can say "Rambo."

Lorne Michaels might be interested in those sketches, Mound. They're SNL material. Unfortunately, their point would go over a lot of American heads.

A do it yourself gun, Mound? That's insane.

Once again, Mound, it's insane.