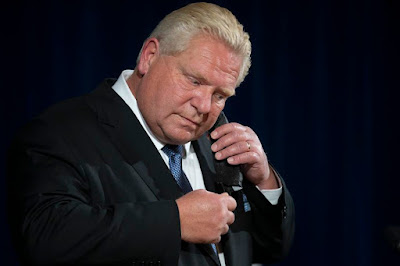 No matter what Doug Ford says, if you listen carefully, you can hear his true colours. Bruce Arthur writes:

It’s hard to imagine how many more ways Ontario can say it. The provincial government encourages you to get vaccinated. You should really do it. It’s individually beneficial, societally beneficial, and there is very little evidence of risk. Vaccines are an incredible thing.

It amounts to a lean towards the minority of Ontarians who are unvaccinated, rather than siding with the vast majority who are. In the past week, it has become clear.

We have vaccine passports. But Ford has already given a date for when they will no longer be necessary:

Minister of Health Christine Elliott admitted that an expiration date for the COVID-19 vaccine passport system was indeed an issue that could undermine vaccination, but she said they couldn’t move anti-vaxxers anyway. Education Minister Stephen Lecce defended no province-wide education mandate by saying up to 50,000 education staff could be fired under such a mandate, without explaining how many of those staff were in which category, and how many had had first shots. Does he really think all 50,000 are unvaccinated?

Those policies flies in the face of the scientific advice Ford has received:

Despite approval from the province’s volunteer independent science table, the province’s council of medical officers of health, and as of Tuesday 120 of the 141 hospitals in the province, including the biggest ones, the province is still dragging its heels on mandatory vaccinations in health care. Sources indicate the successful provincial mandate for long-term care was pushed hard by Minister for Long-Term Care Rod Phillips. Apparently, health care hasn’t received the same push, or the same reception.

Proof yet again that Conservative governments across the country are intellectually and morally bankrupt when it comes to the policies we need in these difficult times.

The fool in Ford always stands out and Covid gave him a great platform to do just that. But, he's not alone by any stretch of the imagination, sure, we've had a moderately successful vaccine roll out, but far too much placating and attention to the loud and obnoxious anti-vax crowd has all but ensured a tough, tragic winter ahead. Out here in BC we see our Provincial Health Officer having a great time at a full house Canucks game while Nurses and Doctors struggle with minimal resources in the North part of the province with cases surging out of control. Weird times we live in, and the world wide failure to contain this pandemic has yet again, proved extremely profitable for those who pay minimal taxes, ergo the pandemic will not go away anytime soon. BC Waterboy

It's painfully clear that we have to restrict our activities if we're ever going to get rid of COVID, waterboy. But for too many of us, that's simply too much to ask.

One can only hope Ford continues to display his real colours during this protracted election campaign, Owen.

By now, Lorne, everyone should know where Ford stands on everything.

Conservatives are incapable of solving collective action problems. They always allow their own to escape the rules they set for others.

Toronto's University Health Network is currently being sued by anti-vaxxer staff who object to the hospitals' "get the shot or get out" policy. Although being up-to-date on immunizations has been required of the healthcare professions for decades, some still want to put patients and colleagues at risk for their own selfish reasons.

All of this could have been avoided if the Ford government had mandated Covid vaccination for all hospital staff as recommended by its hospital advisors. Instead, Ford gave hospital staff the option of regular testing instead of Covid vaccination, even though we know that testing alone is inadequate to stopping Covid's asymptomatic spread. Ford simply doesn't have what it takes to to put public health ahead of pleasuring fringe anti-vaxxers, including his own daughter who regularly posts anti-vax nonsense to social media.

All I can say, Owen, is that as the election campaign ramps up - stand by for another eight months of dismal TV ads, it should become obvious that Ford is in for a squeaker. The good thing is that the more DelDuca pronounces rubbish, like resigning if he doesn't get ranked ballots and pushing for a four day work week in a seven day a week world he looks really goofier than he actually looks.

Personally I hope that Ford panders to his base, it seems to shrink daily as swing voters hop off his bandwagon

Character is destiny, Cap. And the destiny of thousands of Ontarians rests in Doug Ford's hands.