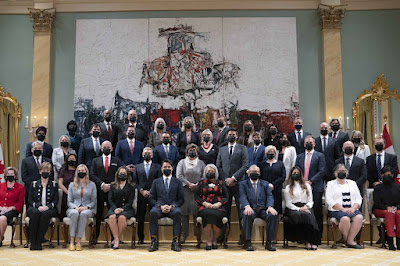 Second, more personal signals. Trudeau wants to be recognized for elevating capable women to positions of power. Despite the prime minister’s emphatic response that he intends to lead the Liberals into the next election, he wants the race to replace him as leader of the Liberal party to be a fair fight. He’s willing to reward performance and offer a chance at redemption. At the same time, Trudeau shows he can be callous, and has chosen to surround himself with friends — even lesser performing ones — who are close to him, or his chief of staff, Katie Telford.

The appointment of Anita Anand to Defence sends another clear message. The culture in the military must change:

Anand oversaw billions of dollars in vaccine contracts with suppliers and the purchase of PPE. She was brought out on the campaign trail this summer to showcase the government’s handling of the pandemic. She will become the first female defence minister since Kim Campbell to lead the department — at a time when the Forces are rocked by seemingly never-ending sexual harassment and assault allegations involving the country’s top brass. Campbell was in the defence job for six months in 1993 before becoming prime minister, a feat Anand may hope to mirror (albeit on a longer timeline).

Justin is clearly considering his legacy. This cabinet will have a lot to do with that legacy.

Changing roles to "highlight the government’s attention on climate change, health, and reconciliation"? Hardly. The last cabinet reshuffle was in August last year. By the time ministers get the hang of things and start to address problems, they're assigned somewhere else. That's a recipe for maintaining the status quo, not a commitment to change.

One can hope, Cap. We're running out of time on lots of issues.

"I was to learn later in life that we tend to meet any new situation by reorganizing, and what a wonderful method it can be for creating the illusion of progress while actually producing confusion, inefficiency, and demoralization.” Attributed to Petronius Arbiter. https://www.goodreads.com/quotes/92278-we-trained-hard-but-it-seemed-that-every-time-we-were

In the midst of cascading crises, Toby, we've reorganized the deck chairs a lot. But the ship is still sinking.

I think the most interesting question for me was - "Why was Mark Garneau turfed?" Who did he upset? Why didn't PMJT like him anymore? Or was he just yoo manly for the newest and latest "Ladies Cabinet"?

Trudeau is good at 'signaling' without actually doing much.

His feminism is 'appointing female ministers' and his environmentalism is a appointing a former* activist who now firmly renounces his past activism and defacto supports the TMX betrayal.

*What's the point of power if, after achieving it, you betray your basic cause?

A good question, Ben. And I don't have an answer. Garneau has been a good soldier.