Who Speaks For Canadians? 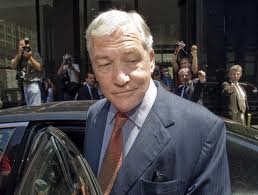 Over the weekend, Conrad Black ventured the opinion that Canada's "almost slavish veneration" of the UN was coming to an end. Calling the recent Human Rights Council criticism of Quebec's Bill 78 "outrageous," Black wrote that:

Unfortunately, Canada was, for most of the UN’s history, far too indulgent of it. First, as a victorious ally and charter member, it was part of the Anglo-American governing consensus. Then, after Lodge gave Pearson the Suez peacekeeper idea (and Pearson forgot that it wasn’t his originally), the foreign policy establishment in Ottawa began to view the UN as a way for Canada to distinguish itself from the U.S. at little cost, and to allow itself, with a modest foreign aid budget, to pander to Third World countries without seriously annoying our traditional allies. This gradually developed into the Chrétien government’s endorsement of “soft power,” a phrase originated by former U.S. president Bill Clinton’s national security adviser Joe Nye, which was a soft alternative to the use of American military might. It is a concept that has any validity only when there is a hard power option, which Canada did not possess. As practised by this country, soft power was a fraud, it was just more softness.


And that's what the Harper government is all about -- hard power. Never mind diplomatic niceties -- even at home. The only thing people understand is contempt. And that contempt, Harper proclaims, is a Canadian value. He speaks for Canadians. Lord Black  appears to believe that he, too, speaks for Canadians.

Before advancing that argument any further, both Black and Harper might consider the results of a new EKOS poll. No doubt Mr. Black would repeat John Diefenbaker's observation that "polls are for dogs." And it is true that they are merely a snapshot in time. As of yesterday, the NDP is on top, with the support of 34.2% of Canadians. Conservative support has slipped to 29.3%. The Liberals are stuck in a holding pattern at 19.2%.

But there is a bigger story behind the numbers:

"The major notable factor here is a pretty alarming for the government, decline in support,” EKOS president Frank Graves said. “They’ve lost over 11 points of support and to see a government that secured a majority under 30 points one year later, I think is pretty well unprecedented.”


The numbers call into question the Conservative claim that they represent ordinary Canadians:

I would stress it’s not much different from the very good result [the NDP] got in the last election,” [Graves] said. “What’s really different here is a majority government under 30 points a year out and with evidence that they may in fact be poorly poised to weather any further ethics storms or any other missteps.”


Canadians are beginning to treat the Harper government with the same contempt which it has shown them.  The UN hopes that Stephen Harper does not speak for the majority of Canadians. Apparently, Lord Black hopes he does.
Posted by Owen Gray at 9:05 am

Email ThisBlogThis!Share to TwitterShare to FacebookShare to Pinterest
Labels: Canada And The UN

I am so tired of hearing from the low level British white collar criminal, Conrad Black. He is interviewed on CBC, as if he is an important person, and written about in the Star. The man has no shame. He appears before the Empire club and insisted he is a victim of American justice. I would be more sypathetic to this if he also spoke out in defense of a real victim Omar Khadr, whom the Conservitives feel they should do anything they can to continue to deny him his rights as a Canadian.

The more Canadians learn of the harm the Conservative government's programs are doing the more they will lose ground. The latest is the revelation that they have cut to support for youth justice prevention programs by 20 %. Strange for a government that claims to be a law and order government. For them law and order does not include prevention or rehabilitation but only incarceration and severe punishment.

Rather than shifting the politcical center of Canada, the Conservatives are learning they do not represent the majority of Canadians who know what they stand for. The NDP are closer to representing the value of Canadians.

Lets have no more reference to Black the criminal. He deserves to be ignored if we cannot get the courage to send him home, where he will probably be humiliated by being kicked out of the House of Lords.

Neither Black nor Harper speak for ordinary Canadians, Philip.

They think they are extraordinary; but they suffer from the delusion that they know all about the common man and woman -- whom they work assiduously to avoid.

It's pretty tough estimating what Canadians think of Mr. Harper. Yesterday, the greatest proportion of the day's Tweets celebrated Canada Day while Anti-Harper Tweets ran a close second. But on Parliament Hill, Mr. Harper received huge applause from the crowd which, chanting his name, urged him to remain longer at the event. Was the applause rigged? I doubt it. To think Mr. Harper is threatened with defeat anytime soon, regardless of opinion polls, is overly sanguine.

Mr. Harper will be with us for sometime to come, Plato. One mistake his critics have consistently made is to underestimate him.

It would be a mistake to write him off.

But I do point out that when he claims to speak for Canadians -- either at home or on the international stage -- that claim is highly dubious.

It is also a mistake to underestimate the opposition to Mr. Harper. The problem with that opposition is that it is unorganized.

We were warned, if Harper wins a majority we can kiss Canada good-bye. Harper is the worst, corrupt P.M....in the recorded history of this Nation.

Harper is every bit as hateful and fanatic as, Stalin, Hitler and Mussolini. All of them have the same typo personalities. They are all obsessive about control. Harper's ministers, are not permitted to say or do anything. Everything must go through Harper first.

How any normal, sane person with ethics and morals can support Harper, is beyond belief.

Perhaps the tide is turning, Anon. But, until the opposition get organized, we will be stuck with him.

Conrad Black would just be a sick joke, but money talks, and it talks loudest to Conservatives. I also am fed up with hearing him.

I thoroughly dislike Harper and his government, but at least they haven't yet given up citizenship.

Black and Harper share at least one characteristic, Chris -- contempt for ordinary Canadians.

Birds of a feather.