Doing Nothing Is Not An Option 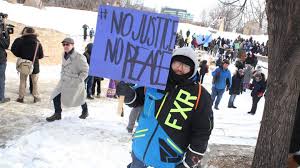 I cannot possibly suggest the jurors in this case were racist. I don’t know any of them and I wasn’t in the courtroom.

But I do know they live in a white world, as do I, and we would all be incapable of knowledge of an Indigenous upbringing in this country, something that carries with it fears, despair, lack of opportunities and outright racism.

This happened because Canada’s justice system is broken.


At a time when we are trying to reach some kind of reconciliation with Canada's First Nations, this decision throws a spanner into the works. Jodie Wilson-Raybould  did not mine words:

The reaction of Wilson-Raybould, an Indigenous justice minister, to a jury verdict was extraordinary and possibly without precedent.

My thoughts are with the family of Colton (sic) Boushie tonight,’’ she said via Twitter. “I truly feel your pain and I hear all of your voices. As a country we can and must do better — I am committed to working everyday to ensure justice for all Canadians.’’


The justice system simply has to change:

“The under-representation of Indigenous jurors is an issue in several provinces and it is a reality I find concerning,’’ Wilson-Raybould said in a statement.

But she promised only “careful study’’ of ending peremptory challenges, something the United Kingdom did three decades ago.


Until the problem of underrepresentation of Indigenous Canadians on juries is fixed, outcomes similar to the Boushie decision are bound to occur.

Doing nothing to solve the problem is not an option.

Email ThisBlogThis!Share to TwitterShare to FacebookShare to Pinterest
Labels: The Boushie Decision

.. there is a Globe & Mail article I read carefully. it made me more aware lf the actual events. First and foremost though the kid should not have been shot. Close range ? To the head? But the article mentioned there are other charges still to be tried. Which I assume will be lesser charges. Yet the behaviour of the kids was in many many ways recklessly dangerous. What was one of them doing in the farmer's pickup truck? The defense claim the gun either 'hung fire' or 'just went off' is ridiculous. The entire incident was lunacy all round

Once upon a time, I passed out driving back to the farm & ran off the road, in the rain, through a fence, startling a herd of cattle. My old British car had an air intake for defog very close to the exhaust manifold which had began to leak. Carbon monoxide poisoning. Eight miles from home I walked to the nearby farmhouse & knocked on the front door.. near midnight. Around the side, a door slammed and a German Shepherd ripped around the corner. I backed away to the road under extreme duress in total darkness.. A snarling dog on my case.

Now the farmer could have turned on a yard light or asked who was out there, and why. But no. I walked the rest of the way home. An OPP cruiser was in our lane. I was charged with leaving the scene. Farmer had called the OPP, officer found my car, a fender jammed into a front tire & ID in the glove box. The officer presumed I was drunk. My coach testified I had left basketball practice approx 15 minutes prior to running off the road 12 miles from University of Guelph. Judge was incredulous that we finished practice near midnight. Coach Garney Henley pointed out we paracticed after his Hamilton Ticat practice and he showered and drove from Hamilton to Guelph. I was a two sport athlete and after U of G football practice had to wait till 9:30 for basketball practice..

The point though is the facts need to come out.. and my story could have had a far worse ending. I gained vague conciousness at the sound & feel of gravel under my tires and jerked the wheel left.. uh I was running up the wrong side of the road & plunged down an embankment in rain & fog past a large tree.. then ripped through the fence.. catching a sapling enroute. That farmer certainly had firearms..

I have no odubt that the kids were behaving recklessly on private property, sal. Innocent they were not. The problem was the response. When you pull a gun on someone, all kinds of things can go wrong.

The fact is Boushie was shot -- dead. That did not have to happen. It was a misjudgement. But it was not an accident.

By the way, as a kid growing up in Montreal, I rooted for the Alouettes. But they faced no finer oponent than Garney Henley.

Peremptory challenges are vital to the defence and I can't imagine many counsel wanting to give up that privilege. If the Crown used its challenges to eliminate jurors based on their race or ethnicity, the trial judge ought to have intervened. Let the Crown take it on appeal if it likes. This is an issue that will eventually have to come before the Supreme Court of Canada.

I suspect this will go all the way to the top court, Mound. It's too controversial a decision to not wind up there.


I've been thinking about this, Owen, and I suspect the rot may go much higher than the prosecuting Crown Attorney. He (she?) must have been confident that this was the way "they get things done" in that province. That Crown must have been confident that his/her boss, the provincial Attorney-General would be okay with it. For, ultimately, it is the Attorney-General to whom they account. The failure of the Crown in this case lies directly at the feet of the provincial AG and the government of the day.

I suspect you're right, Mound. Having spent a little town in the American South, I'm beginning to wonder if it's a bit akin to when white "Citizens Councils" controlled the agendas in southern towns.