On The Side Of The Nabobs 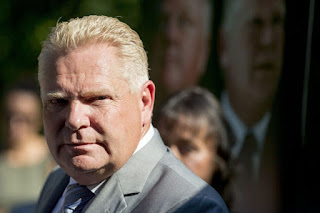 Tom Walkom writes that Doug Ford just might become the leader of Ontario's Progressive Conservative Party. Ford is no progressive. But he is angry. And, in conservative circles these days, you can get a lot of mileage out of anger:

So far none of the candidates has said much that would substantively differentiate them. Elliott and Ford oppose the imposition of a carbon tax as called for in the party’s election platform. Mulroney is vague but has said that if she wins she might rethink the entire platform.

The real difference is tone. Ford rages. The other two do not.

Ford’s main policy pronouncement to date is that, “It’s time to clean up this mess.”


The party hierarchy doesn't want Ford in the driver's seat. But the hierarchy does not have a good track record when it comes to choosing leaders:

The party has the distressing habit of ignoring the nabobs and making unsafe choices.

In 1990, it defied the then Red Tory old guard and chose Mike Harris. Harris tanked in the subsequent general election but recovered to win two back-to-back majority governments.

In 2004, the party made the safe choice of picking John Tory as leader. He lost the next election.

In 2009, the party chose Tim Hudak, a Harris acolyte, over the more centrist Christine Elliott. Hudak lost two elections. But the party rank and file were undeterred. In 2015, they elected as leader another controversial outsider — Patrick Brown.

Once again, Elliott, campaigning as the safe centrist, lost.


Ultimately, of course, what matters is what the voters of Ontario think. They might just be on the side of the nabobs.

A raging, boorish, ignorant, white male son of a wealthy family leading a conservative party? Nah, too far fetched! The PCs are the party of moral rectitude, responsibility and prudent behaviour.

Ontario's PC's like to think of themselves as genteel, Cap. That's not Doug Ford.

That Doug Ford is deemed to have a chance to win s an indictment of how far politics and political discourse have fallen, Owen. The rage felt by many will find no relief in the likes of Ford.

It's always been true, Lorne, that empty barrels make the most noise.

.. I keep coming back to fundamental concerns, Owen. North Americans are faced with Donald Trump.. More specifically, in Canada we hear from Trudeau, Scheer etc. In Ontario, there cometh Doug Ford.. or .. and whither Patrick Brown.. But the messages to almost anyone who can interpret or stand to pay attention are streaming from mainstream media.. owned or driven by whom? Eyes glaze at 'a new study' or 'a recent poll' or the latest scandal.. or the state of the Prime Minister's socks..

Polar bears are endangered.. but no they aren't.. The provincial BC courts will not proceed against Mt Polley.. oh but the feds might. We cannot afford to look after military vets but we need 75 F-35's.. the ying of the yang is dizzying, blurring and there's a constant smell of horseshit. But people stalk the streets studying their 'smart phones', too often manouvering what appears to be fruit droplets. Road rage, overpopulation.. what is Robert Mueller up to. There are asteroids in space.. the Pope says..

We need powerful exemplars.. like NOW -- we need champions Now - we need astonishing poets - we need antidotes to the venom of Alex Jones or Ezra Levant - we need hob nailed boots on the ground and by the rivers edges - we need defenders not offenders - we need pots and pans banging in the streets and on our shores

I'm getting disenchanted.. I might get really mean.. I might go loud .. I wish I had the talent of Banksy, the voice like Joni Mitchell, the cajones of Hunter S Thompson, the voice of the suffragetes, the perceptions of Marshall McLuhan & any other giants or giantessses with hob nailed boots.. Politics is sick, diseased.. & mainstream media has become a carrier

Your observation that we need defenders, not offenders, goes to the heart of the matter, sal. These days, if you make a lot of noise, that qualifies you for office.


It all comes down to fear. Fear can be controlled but it can be even more profitably manipulated. Where are the Franklin Roosevelts when we need them, the people who tell us the only thing we have to fear is fear itself? Those are the leaders who know you'll never build anything worthwhile if the public is beset by fear. The other type of leader, the guy who manipulates fear, they prey on their public. Out of fear, so easily stoked, emerges anger, suspicion, perceived grievance and hostility - these scourges that sap social cohesion and leave the public malleable and nearly powerless. Look at how many Americans are today guided by their basest instincts.

Trump, Erdogan, Netanyahu, and Orban. Their playbook is a quick read, easy to follow and sure to deliver results. That Ford chooses that path is hardly surprising. The worst part is they're winning.

At this point, the script has become tiresome, Mound. You'd think we'd be able to spot a tin pot dictator as soon as he opened his mouth.

Who knew? There's actually a book on Stephen Harper's war on crime entitled "Fearmonger," available as a Google book: https://books.google.ca/books?id=6plZwWc35o4C&pg=PA110&lpg=PA110&dq=was+fearmongering+during+wartime+a+crime&source=bl&ots=o-2DEREiea&sig=49SiFZ5w3FhJRDfeC4GhEUWyxkc&hl=en&sa=X&ved=0ahUKEwiC8YDaqpfZAhVI9mMKHQceCeMQ6AEIMTAB#v=onepage&q=was%20fearmongering%20during%20wartime%20a%20crime&f=false

It's the perfect predatory scam. You inculcate a widespread fearfulness of some imaginary threat and then present yourself as the defender/protector just waiting to be summoned. They use predatory tactics to exploit the vulnerabilities of their own supporters. It's a hostile act of psychological aggression against the very people who vote for you and yet rarely do the Gullibillies realize they're under attack.

Roosevelt knew a lot about mankind's darker angels, Mound. He understood how the people he called "economic royalists" intended to use public fear against him. Thanks for the link.