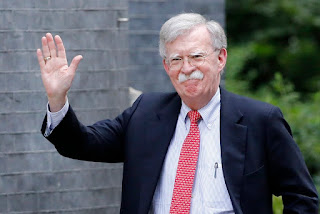 John Bolton has probably planned it this way. After all, when he left Donald Trump's employ, he declared that he would eventually have his say. Frank Bruni writes:

Bolton is the impeachment star of the week, whether he winds up testifying or not, and I can’t shake the feeling that he plotted all of this out: keeping his head down during the hearings in the House; letting it be known only afterward that he’d be willing to testify in the Senate; the revelation this week — simultaneous with assertions by Trump’s defense team that there were no firsthand witnesses to the president’s wrongdoing — that his book indeed addresses Ukraine and fully backs up the charges in the articles of impeachment.


No one should be surprised that things are turning out this way:


Donald Trump is ruthless. But he's not brilliant. And Bolton is going to have his revenge.

Image: The New Republic
Posted by Owen Gray at 10:15 am

Exactly, zoombats. I suspect that Bolton will disembowel the president with cool precision.

.. we all want to see the Making Comuppance Great Again ..
Trump humiliated down to - a last helicopter ride to Mar A Lago
Trump especially guilty.. the charge is essentially being jackassery
screwed the pooch bigly and then some
and look at all the dubious GOP rich folk, cronies, opportunists, grifters
that came in with Trump.. its been worst case disaster - gets really real

At least for now, John Bolton is in the kingbird position
Instead of being just one turd among many
He's stepped back, is not toeing any line but his own
Basically, he could go supernova in the next few weeks
He intends to be seen as one of the rarest good guys
heh heh .. a great patriot.. blah blah
Gonna be a wild ride for him, forever.. no matter !

When the history of all this is written, it will be full of blackguards, sal. Only a few -- like the civil servants who came forward -- will be praised.

Bolton served notice on Trump when he said he resigned and was not 'fired' as Trump later maintained. That was the sound of the pin being drawn from the grenade. Distributing the manuscript - that was the striker lever flying off. After that, stuff is simply going to happen.

I'm still not sure that the Republicans will let Bolton testify, Mound. But I am sure that it's a hard rain that's gonna fall.

I'll bet nothing will happen without Bob Mercer's blessing.

FYI & for the record .. 'When the President of the United States is tried, the Chief Justice shall preside' - If the Supreme Court of the United States cannot comprehend, parse or reason out the simple blunt intention and direction - 'shall preside', then the American Constitution just went in the toilet along with the GOP Senate, the Presidency.. and the entire aspect of 'Law' or 'Justice' must be seen as toothless chin wagging cartooning & posturing. Then its 'anything goes' including anything.. ANYTHING.. Be sure to read and consider the last paragraph which deals with 'after conviction' !!!

The House of Representatives shall choose their Speaker and other Officers; and shall have the sole Power of Impeachment.

The Senate shall have the sole Power to try all Impeachments. When sitting for that Purpose, they shall be on Oath or Affirmation. When the President of the United States is tried, the Chief Justice shall preside: And no Person shall be convicted without the Concurrence of two-thirds of the Members present.

Judgment in Cases of Impeachment shall not extend further than to removal from Office, and disqualification to hold and enjoy any Office of honor, Trust or Profit under the United States; but the Party convicted shall nevertheless be liable and subject to Indictment, Trial, Judgment and Punishment, according to Law.

Mercer has deep pockets, John. We'll see how much influence they buy.