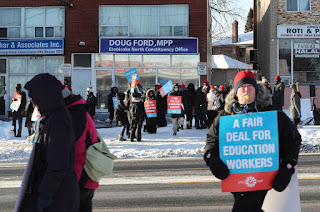 Recently, I've devoted a lot of space to the escalating confrontation between the Ford government and Ontario's teachers. My interest in this situation is obvious. But, in the end, what sticks in my craw is the fact that, over the last twenty-five years -- a generation -- Ontario's so called Progressive Conservatives have learned nothing.

Intoxicated by their electoral victory, Doug Ford’s Tories placed themselves on a deliberate collision course with teachers last year. By declaring a legislated cap on wages, cuts to teaching jobs, bigger class sizes and mandatory online courses, the premier wasn’t just being proactive but provocative.

Instead of setting the table, the government upended it. Ford assumed he could get his way by simply proclaiming his bottom line, notwithstanding the picket line.

That’s not how labour relations works. Nor how politics plays out.


Things have gotten progressively worse. The government wants to move to arbitration. But it's not that easy:

The price you pay is that an arbitrator has the final say. As this government well knows, any arbitrator reviewing the current wage dispute would almost certainly find in favour of the teachers, who are being eminently reasonable this time.

Which is why the PCs are in no hurry to hand this one off if they could — but they can’t. In fact, it’s far too early in the process for the government to legislate teachers back to work even if they wanted to.

First, a government must show that the school year is in jeopardy, which is still a long way off after just a few days of missed classes (no matter how disruptive). Second, this government will have to defend itself against a legal challenge of its one per cent pay cap imposed on public-sector workers without any obvious economic emergency to justify it.

What’s interesting about this dispute is that the teachers aren’t asking for a big pay hike. They are asking for roughly two per cent to cover the rate of inflation, rather than accepting the de facto pay cut (falling one per cent behind the cost of living) that the government has ordered them to take. That’s below average private sector wage settlements of 2.1 per cent in Ontario.

That pay packet may sound generous — until you remember that the cost of living in Ontario’s biggest cities is among the highest in the country. Which is why our plumbers, doctors and others are also among the highest paid nationally.

To force pay restraint — or what amounts to a pay cut — on its employees, the employer must make a persuasive case that it can’t afford to pay more. For example, if revenues have tanked.

The Liberals tried that argument after the 2010 economic crisis and had the facts on their side, but still got overruled by the courts for riding roughshod over collective bargaining rights. Now in 2019, with Ford crowing over a growing economy, with revenues up and unemployment down, on what grounds does he demand that teachers make sacrifices?


Put simply, when it comes to education -- and labour relations -- the Fordians have learned nothing.

Image: The Toronto Star
Posted by Owen Gray at 10:18 am

An attack on teachers is standard for Gordon Campbell, who now advises, Ford. its not about the cost of education or the salaries. its about attempting to weaken a very strong union. When the Teacher's Union is engaged in this labour dispute it isn't engaging in other things, such as organzing for the next election. When teachers are on strike, there will be certain number of the population which won't like it, thus weakening the teachers' positions when the election does take place. However, as we saw in B.C. it really didn't help the government.
What we did see in b.C. and you might start to notice in Ontario is an increase of private schools, which will not be unionized. that is part of the aim of the game. Increasing private schools.

The people of Ontario voted for Ford and now their children get to stuffer because of it. Nice going parents.

You're absolutely right that the Fordians learned nothing. In fact, somewhere down the line, Ontario teachers left young Doug with a woeful appetite for learning and critical thinking. Given that lack of educational achievement is the biggest predictor of PC support, Doug is now exacting revenge on behalf of them all!

It's straight out of the libertarian playbook for labour relations in the public sector. They can't help it; they can't change their spots. Never, ever even think of going after the firefighters; suck up to the cops; treat the nurses like no-accounts; and always, always, ever always trash the teachers. Everybody remembers at least one of them who was a waste of good rations. Read the letters to the editor. Wait a minute. It always worked in the past. How come it isn't working for Ford?

Owen, have you noticed that small business operators use the same language as the corporate world. They tend to have little or no equivalency other than language. I mention this because so many of the small business operators I have known believe themselves to be geniuses, on a par with the likes of Bill Gates and Jeff Besos, much smarter than civil servants including teachers.

Doug got very little from his education, Cap. And he sees no reason why he should give much to education in this province.

Perhaps Doug's past is catching up with him, John.

It's a mindset that crosses social class, Toby. It provides self definition for these folks. And it blinds them to other folks.

As Cassius said to Brutus, zoombats, "The fault, dear Brutus, is not in our stars but in ourselves."