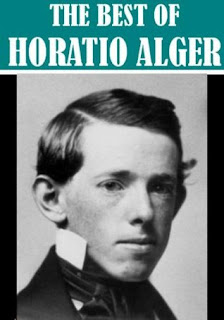 The Horatio Alger myth is still central to North American politics. Alan Freeman writes that, in the United States, candidates are falling all over themselves to present themselves as 21st century Horatio Algers:

Americans have always loved Horatio Alger stories. But as the country has grown more affluent, it’s harder for politicians to point to their own personal stories of pulling themselves up by the bootstraps. So they borrow a bit from their parents or in the case of Amy Klobuchar, the Minnesota senator who’s hoping the four frontrunners tank and give her a chance, she goes back two generations.

Klobuchar never mentions that she attended Yale and University of Chicago Law School and worked as a corporate lawyer before going into politics. But she has plenty to say about her grandfather, a Slovenian immigrant to Minnesota.

Joe Biden, not wanting to be left out of the emotional sweepstakes, chimed in that he too had once been a single parent, after his first wife and daughter were killed in a tragic car accident. Then he went on to say that he couldn’t afford child care so he commuted every day from Washington to his home in Wilmington, Del. His job at the time was U.S. Senator and he earned US $42,000 a year. The median income of Americans in 1972 was $11,120.


And, in Canada, we were recently presented with Andrew Scheer's up by his bootstraps story:

In Canada, Andrew Scheer laid it on thick about how his family didn’t own a car when he grew up, how he was just a sports-loving Dad to five kids and a stay-at-home wife etc., conveniently ignoring his generous earnings as a politician and subsidized housing, not to mention the secret party payments for his kids’ schooling. That didn’t get him far.


Donald Trump is the exception:

The most successful politician of our day, Donald Trump, loves to talk about how rich he is. He likes to say how he became a billionaire on his own but doesn’t deny he got a hand from his Dad. And he makes no excuses for being rich. He revels in it and his working class supporters love it.


So let's get real. People who are in politics these days have been given a hand up. Either they come from affluent families, or they went to very good schools -- or both. They may be very hard working  -- which is, or should be, a feather in their caps.

But they've also been lucky. Good things have happened to them. Let's acknowledge that fact -- and forget the myth.

Image: Goodreads
Posted by Owen Gray at 9:40 am

Why does the syndrome always seem to go so hand-in-hand with a fondness for little boys? I think it might have something to do with the ability to kid oneself. Horatio Alger certainly did it well.

Next situational rugged individualist, stand up.

Especially on this day, let's look at these "bootstrap" stories a little more closely and acknowledge that the unearned privilege of being white plays a great part in most of them.

“It is a cruel jest to say to a bootless man that he ought to lift himself by his own bootstraps.” -MLK

Some myths -- particularly the most foolish -- die hard, John.

King knew that intelligence and hard work could leave a lasting legacy, Cap. He also knew that some fallacies -- like separate but equal -- were cruel lies.