How Long Can He Get Away With It? 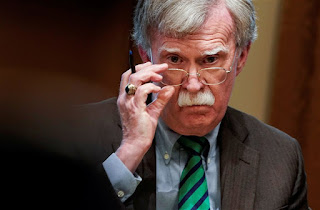 In another time, in another Washington, this might be the moment that changed the trajectory of the presidency. A former national security adviser confirms that the president, despite his denials, conditioned security aid to a war-torn ally on its cooperation against his domestic rivals, the issue at the heart of his ongoing impeachment trial.

At first glance, at least, John R. Bolton’s account of President Trump’s private remarks sounds like an echo of the so-called smoking gun tape that proved that President Richard M. Nixon really had orchestrated the Watergate cover-up and ultimately forced him from office. But this is Mr. Trump’s era and Mr. Trump’s Washington, and the old rules do not always apply.

The reality show star who was elected president even after he was captured on an “Access Hollywood” tape boasting about sexual assault has gone on to survive one revelation after another in the three years since, proving more durable than any national politician in modern American history. So will this be the turning point or just one more disclosure that validates his critics without changing other minds? Will it be another smoking gun or another “Access Hollywood”?


That really is the question. Bolton's revelation should sink Trump's defence. But, in the Senate, the outcome has been pre-cooked. As Adam Schiff has suggested, moral courage is nowhere to be found in the Republican Party.

So one has to ask: How long can he get away with it?

As Heather Digby Parton points out Trump's lawyers now have a real ethical problem. Repeating a clients lies , while knowing they are lies , can lead to disbarment.

John Roberts has an unhealthy regard for his ' legacy ' . His choice is to act in accordance with the law and protect his reputation or throwing himself on the Trump rubbish heap.

Revelations are appearing when they can do Trump the most harm. there may be worse to come.

Trump can't bottle up the truth, rumley. He'll eventually go down. And he'll take a lot of people with him -- maybe even the republic itself.

Honest question: Can Roberts do anything about the jurors (ie senators) who have proudly proclaimed that they are not impartial? Would there be any consequences for them seemingly violating the "oathy thingy" that they swore at the beginning of this trial?

[I lost my original posing of this, and so am paraphrasing myself as best as I can recall)...

I'm not sure, RJ. From what I've read, the senators can overule any of Roberts' decisions -- if they have enough votes.

After hearing the tapes, one of the Ukrainian/americans has taping Trump telling others to "get rid of her", the Ambassador to Ukraine and now these drafts, it really brightened up my evening. Empty Wheel, which blogs everything, Mueller, Trump, impeachment, etc. with great detail has a couple of posts up on Bolton. The blog also provided information regarding Bolton's presence, in Quatar, a week prior to Soleimani being murdered. Was that just a coincidence or something more sinister.

Empty Wheel reports Bolton's notes from his time with trump have been distributed to friends. When the draft of the book was sent to the government so it could be reviewed by them to ensure nothing of national security value was included, Bolton's lawyer also sent along instructions that this draft was for "professional staff" only, not political appointees, etc. So how did it all get out?

Bolton doesn't need to testify, between his draft and the tapes, everyone who wants to know, does. if the Senate votes to not remove Trump from office and all this is out there, can it be said the Senate participated in a cover up. Wonder if one of those billionaire candidates will start running ads using Bolton's material and the tapes against Trump.

Some of the questions on the blog, might be answered over at Empty Wheel. From what I can conclude a number of the posters are lawyers. Marcy Wheeler testified at the Mueller Inquiry and is incredible.

.. my understanding is that the Constitution is somewhat sparse re Impeachment.. but !
The segment relative to Impeachment clearly states the Presiding Trial Judge shall have sole control of the proceedings of the trial. That interpreted (which seems uneccesary) means all the procedural manouvering by Mitch McConnell is in fact out of his jurisdiction. One would think Judge Roberts and the rest of the Supreme Court would have been clear on this prior to Roberts tsking over the trial. Instead, it appears McConnell is getting away with the erosion of Constitutional Law. Also that it is clearly within Roberts power to simply call for specific witnesses at his discretion and/or call out either party on any procedure or actions.

Thanks for the Empty wheel tip, e.a.f.

I've read that Roberts can call for witnesses, sal, but that he can be overuled. We'll see what happens.

I've been March Wheeler's blog for some time, Owen, and it has helped me immensely, particularly by including the comments from very informative lawyers who have collectively a huge and vast knowledge of the vaunted "democracy" practiced in the US of A. She is also a guest on Thursdays on (I think) CBS around mid evening. I haven't remembered to catch it but her information provided re political/legal matters is often mentioned by commenters on her blog. Its all good stuff! not that it seems to matter to the masses of gullibillies that find themselves in the voting booth every 4 years.

.. There is a phenomena..
whereby people may make seemingly ludicrous decisions ..
this is fact.. unarguable
Enwrapped within the grip of such phenomena,
people do strange things or can do great things
fact

For whatever reason, the strange penomena's grip may slip
suddenly people may seriously question their status quo

Hello John Bolton.. certainly a misled scoundrel & factional zealot
Trump is part of the phenomena and Bolton rode that
but.. then the grip slipped & John boy began to write a book
perhaps to his surprise, a new realization dawned
He was suddenly not just the former powerful vassal
he was the right bower, the trump card, the kingbreaker

I rhink he just shrugged one day, laughed about the cartoon show
the prance n dance of McConnell, Giuliani, Hannity, Trump, Barr, Pompeo
The carnival adventure music was way off key, macabre, ridiculous soap opera
and as the impeachment media storm came sweeping in
miraculously his book, his testimony was atomic
he would be like a final gatekeeper to validate the passkey
to Trumplandia Wonderland, Giulianiville, MitchWorld, HannityFantasy Cesspool
as they all began to cover up.. ulp !

Bolton right now is transcendant..
He has turned the Impeachment Trial on its ear
Its zero sum now for the Republican Senate and Party
Upside - huge (its everything)
Downside - GOP go supernova explode everything
cement their historic status as mere dirty plumbers
poster boys for sleeze through all future generations

Thanks for the tip, Lulymay. I think I'll consult her blog regularly.