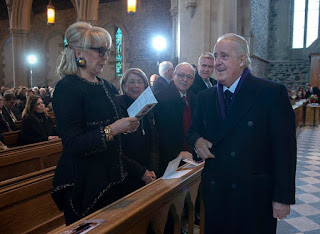 John Crosbie was laid to rest yesterday. And, Susan Delacourt writes, the old and ugly divisions in the Conservative Party were on full display at the funeral:

While one former prime minister, Brian Mulroney, was eulogizing Crosbie this week with a funny, touching speech, another former PM, Stephen Harper, was suddenly popping up everywhere too — except at the funeral in St. John’s.

Harper has appeared multiple times in the news this week: lecturing about Iran at a conservative conference in India; quitting his role on a Conservative financing board. Macleans’ columnist Paul Wells even reported that Harper was planning to get more active in the leadership contest, to ensure that Charest doesn’t take over the party.


History makes clear that -- whether the leader's is named Trudeau, Mulroney or Layton -- there are distinct advantages to choosing one of Quebec's native sons as leader. But Harper is strange piece of work. Certainly John Crosbie didn't like him: "“He is cold. He doesn’t have human warmth. He’s not able to even work a room. He doesn’t want to meet people.” Crosbie knew his man.

And Harper was no friend of Crosbie's son, Ches:

Ches Crosbie . . .was blocked by Harper from running as a Conservative in the 2015 election.

[He] was reportedly turned away because he’d committed the sin of making fun of Harper on stage in a satirical play. John Crosbie was not at all amused by the summary justice from the then-PM, telling a reporter that his son should run as an independent. “I feel like running myself and beating the piss out of them,” the elder Crosbie said.


The Conservative Party is in bad shape these days. And, as long as Stephen Harper haunts its back rooms, it will remain in bad shape.

Image: The Toronto Star
Posted by Owen Gray at 9:23 am

I suspect the Conservative Party is having something of an identity crisis, Owen. With ever-increasing public recognition of the reality of rapidly-occurring climate-change, what are die hard reactionaries to do?

The problem for Conservatives these days, Lorne, is that facts undercut what they say and what they believe.

I hope Harper keeps mouthing off. If he continues it may generate sufficient attention and interest to bring about the public humiliation that he deserves but has been able to avoid. The press can serve its professed purpose by offering him no further softball interviews and exposing to ridicule those of its members who would.

I agree, John. So far, Harper has escaped blame for his party's failure.

Harper's on the run. The notorious coward who was ridiculed for hiding in a closet while women and disabled party members prepared to defend themselves, is running from his responsibility as chair of the Con Fund.

I don't for one minute believe this lame story from anonymous sources that Harper is preparing to take on Charest. It's far more likely that as fund chair Harper signed off on Scheer's subsidy and had a similar deal for himself when he was PM. But when Scheer wouldn't quit like Harper wanted, Harper's flunkies put out the "scandal" that caused Scheer to resign. Harper then did what comes natural to him - blame Van Vugt and drive the bus over him.

He got away with this as PM, but he ain't PM no more. Van Vugt had his own base of support in the party and a wrongful dismissal suit would shine unwanted light on the party's finances and Harper's role in managing them. So Harper quits while in India, ensuring that the media move on to some other story by the time he gets back. The sooner Harper cuts all ties with that party the better. The guy's presence during the leadership race will be like a skunk at a wedding.

I agree, Cap. The party should cut its ties to Harper. However, I'm not sure that will happen.

.. perhaps unrealistic pipe dreaming.. but the Harper era is the main reason I see no further use for the ponderous political Party system in Canada. Certainly the current model of political Parties in the USA is laughable.. two Parties duke it out every four years.. oh really ..! And the fact that somehow the 'Conservative Party of Stephen Harper in its current incarnation is openly in bed with anything GOP and the Buffoon In Chief - Donald Trump ? That renders anything they supposedly stand for as tainted. How does that serve Canada and Canadians ? All I see is a whole lot of whipped excess baggage posturing and preeening on our dime TS

My hunch, sal, is that if we moved to some kind of proportional represenation, the nature of our parties would change. But that doesn't seem likely.

.. your response certainly caught my attention.. and proves 'there's more than one to skin a cat' .. I'm sure I already sent this link.. re Monbiot.. but I re-read the article early this morning, while re-reading your post, its comments and your sage responses.

I thought about Ontario - Doug Ford and Alberta - Jason Kenney - Saskatchewan and Scott Moe and Canada potentially with another 'Conservative' Government.. frightening to consider that both BC and Canada could be flipped into new elections at the same time due to Non Confidence votes. BC 'Liberals' is a word trick, an illusion.. to thinkChristy Clark or Rich Coleman are ''Liberals' in any way shape or form is laughable.. that Party evolved into a western Harper Reform farm team.. a convenient dumping ground for Ottawa political animals needing 'to spend more time with their family' or outright political cronyism.. and corruption

Canada is not able to afford more 4 or 8 year guaranteed 'coaching contracts' like Alberta & Ontario have.. save that for pro sports leagues. The huge, ponderous and interlocking political Parties like 'Conservatives' or 'Liberals' or dazed in the bewilderness NDP. The current political fads of 'retroactive' new legislation replacing the previous or simply reversing or deleting laws is absurd. Canada came within a whisker of Quebec 'seperating' already, barely avoided a Maxime Bernier ascension or a Harper puppet named Scheer.. and now look at Alberta ! It was several 'Conservative' factions 'Rebranded' as the UCP.. just like Harper Rebranded his flailing Reform Party by essentially a hostile takeover of the Progressive Conservative Party. Independent candidates are by design almost impossible to get elected.. Jane Philpott last due to ludicrous media piling on.. Ms Wilson-Raybould somehow got back in.. her BC riding believed in her, but her Ontario riding failed Ms Philpott yet she lroved to be the real deal. Who cares who took over her riding,. Jane's already in motion doing exemplary work in her community and elsewhere in service of Canadians !

The ponderous Party system is 'for the better good? This is ''Nation Building' .. ? ? I must stress again the quote I first heard in Question Period from Tom Mulcair.. 'do they take us for fools ?' .. I want to learn more about 'rewilding' our political systems.. !! Toute Suite - Pronto !!

Apparently our parties do take us for fools, sal. It's all about bread and circuses.

The last line is so true. Its good for some of the other parties that Harper continues to "haunt" the back corridors and rooms. However, for democracy not so much. It leaves other parties unchecked, because for some a bad Liberal, NDP, Green, etc. party is still better than the ultra conservative Conserative Party.

There is also the problem for Canadians, if the Conservative party were elected to power, of women's rights, health care, guns, etc.. In my opinion it would be best for the country if some one like Jean Charest did win the leadership. Voters need a reasonable option.

Cap you maybe onto something there about the "finances".

You bet the politicians think voters are fools. So does the media. We've seen enough "news' which looked like press releases from the B.C. lIEBERALS when they were in office here in B.C. and they were not Lieberals, they were Cons. there were enough of them working for Christy clark. however, the results of the report into illegal gambling money laundering has become public in the past few days. It was written in 2009 and the result was Rich Coleman disbanded the RCMP unit which wrote it. you know, nothing to see here, waste of money, etc. What we did see in the report, --global interview with Sam Cooper, was a foreign criminal was given the go ahead to purchase shares in a legitimate casino in Richmond, B.C., kidnapping, extortion, human trafficking of debtors in china.hong kong, etc. so they could work off their debts as sex workers, the list goes on. So this is what those on the Conservative side of things think is just fine. this all happened on Gordon Campbell's watch as Premier. He is currently as I understand it an "advisor" to the Ontario Premier Ford. Might want to check how money laundering is doing there, along with who owns the casinos and who has bought in recently. Christy Clark took over as premier in 2011. the game just got worse. Money laundering became known as the "Vancouver model", all over the world.
So when people think how stupid do politicians think voters are: re read the above paragraph regarding money laundering in B.C. and its casinos. All of this while the same man remained in his cabinet position, Rich Coleman.

These days, e.a.f, politics seems to be about giving a green light to corruption.