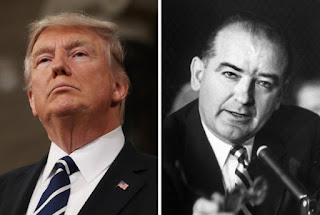 Jonathan Chait writes that we now know what would have happened if Joe McCarthy had been elected president:

McCarthy is surely the closest parallel to Trump that can be found in post-war history. Those who recall the period of social terror he helped unleash would be the least surprised at another right-wing demagogue’s rise to power. Thinking about McCarthy’s era in juxtaposition to Trump’s should change the way we think about both.

Both McCarthy’s allies and his most left-wing opponents found it convenient in his time to define McCarthyism as merely intense anti-communism (the former because it justified McCarthy, and the latter because it discredited all anti-communism.) But when McCarthy arrived in Washington after World War II, both parties agreed completely on the evil of communism, and agreed generally that at least some communist spies had managed to gain access to government secrets. What split the parties was Republican efforts not only to exaggerate the scope of the security problems, but to associate the entire liberal project with communism.

McCarthy was a serial liar, often frustrating his staffers by departing from whatever text they had prepared for him. “If we give this to the senator … he will blow it up to proportions which cannot be supported,” fretted one staffer. And while erratic and uncontrollable, McCarthy managed to commandeer hyperbolic press coverage, simply because the very fact of his sinister accusations was objectively newsworthy and attracted attention from readers. Reporters were well aware that McCarthy was manipulating them, and they brooded over his ability to turn their principles of journalistic objectivity against them. One paper experimented with banning all McCarthy stories from the front page. Much like the Huffington Post’s short-lived policy of exiling Trump coverage to the entertainment section, it did not take.


And so here we are once again. But there are differences. It was one Republican senator from Maine -- Margaret Chase Smith -- who had the singular courage to take on McCarthy. And it was one journalist -- Edward R. Murrow -- who had the courage to challenge him on television. Now another woman senator from Maine has shown abject cowardice. And Trump has a whole television network working for him.

Chait comes to the following conclusion:

With modern eyes, we can see the opportunity McCarthy exploited has perhaps been there all along. The surprising thing about his career is not how such a dangerous liar amassed such power so quickly when his fellow partisans understood his true nature, but why it took so long for the next McCarthy to come along.

McCarthy’s career explains so much about the response by the political system to a right-wing demagogue — the fear he caused, the loyalty he inspired, the nervous submission of the center-right, and the rationalizations produced on his behalf. There is just one, very large mystery McCarthy’s career does not answer about all this. What happens if Joe McCarthy is not a senator, but instead president of the United States?


American policy holds that you can't indict a sitting president. That means -- other than an election -- the only remedy open to Americans to hold a president to account is to impeach him or her. Yesterday, Trump's lawyers delivered their response to impeachment: "Yes I did it. So what?"

Two hundred and fifty years ago, the powers that be rebelled against a king. Now they have decided it's better to have one.

Image: New York Magazine
Posted by Owen Gray at 9:46 am

The link from McCarthy to Trump? Disbarred lawyer, Roy Cohn.

What is it about their understanding of us that allows them to be successful? Some people just don't mind being treated like fools or don't even realize it when they're getting that treatment. It's a frequent reminder to me that mother was wrong.

I repeat what Mr. Twain wrote, John. "The fools are the majority in any town."