It's Not Scheer, It's The Party 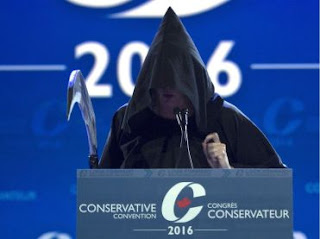 There are many who believe that Andrew Scheer's resignation will bring renewal to the Conservative Party of Canada. But, Marc Lafrance writes, Scheer is actually in step with his party. Consider the party's MP's:

For example, Campaign Life Coalition — Canada’s biggest anti-abortion group — says that 46 out of the 121-member Conservative caucus are pro-life, which amounts to almost 40 per cent of the party’s sitting MPs.


It's not just the party's anti-abortion views that affect party policy. Those views are part and parcel of a general outlook:

Anti-abortion voters tend to differ from pro-choice voters when it comes to their views on the status of women, according to the survey.


And the party's views on women filter down to its stand on inequality:


The problem isn't Scheer. It's the Conservative Party.

Email ThisBlogThis!Share to TwitterShare to FacebookShare to Pinterest
Labels: Scheer And The Conservative Party

Or as I like to think of them, the Conservatives are that load of busybodies who don't mind telling other people how to behave, and in no uncertain terms at that.

They walk around mouthing inanities on being rugged individualists while claiming the Left, i.e., all those who don't think like them, are top down statists and societal underminers who order people about in planned economies, when in fact the opposite is true. I believe this blinkered outlook is commonly called cognitive dissonance.

Vision for the future by definition is not a Conservative trait - they revere the past and want those norms for the future. It's why real Conservative intellectuals have always been thin on the ground. They tie one hand behind their back before they start out, and then expect standing ovations for the same old tired policies recycled for the umpteenth time. The wonder is that anyone with a brain supports them at all.

All of which should serve as a warning to all voters: opting not to cast a ballot can be a very dangerous choice, Owen.

There are still lots of people who believe that it's best to walk into the future while looking backwards, BM. The problem is that they keep tripping over the obstacles the future keeps placing in their path.

Choosing not to vote is making a choice, Lorne. And making that choice always comes back to bite you.

Blame Manning. Preston opened the gate for western social conservatives/bigots/racists/xenophobes. He purged them when they got out of line enough to be noticed by the media but, if they kept their heads down, he was strictly open arms. The Reform/Alliance/Conservative party has had an unbroken string of social conservatives at the helm. It's a party of angry old white dudes, the base. As, one by one, they depart this mortal coil the writing is on the wall. To the south the Repugs are the last bastion of white power so much so that they resort to everything from gerrymandering to the gamut of voter suppression techniques to undermine the non-white vote. Before the first ballot is cast the Repugs have a several point manufactured advantage over the Dems. In a decent society these tactics would be seen as deplorable. Today, with the decline of liberal democracy, they're run of the mill.

In North America, white voters are increasingly paranoid, Mound. On the planet, they've always been a minority. Now -- in their own backyard -- they see that they're a minority. They desperately try to maintain the illusion that they are the movers and shakers.

It can be really tough when reality catches up with you.

As the old saying goes, "Conservatism cannot fail; it can only be failed." Since Scheer has failed to bring the party to power, he must go.

Conservatives will do just fine without him, always enjoying the fundraising advantage that comes with being handmaid to plutocrats. The party that claims to represent the Tim Hortons customer is really the party of the Ritz-Carlton customer. The party bigwigs don't really care about abortion or the various bigotries and resentments guys like Ezra help nourish. Those are simply the issues that get the Tim's customers to vote for the tax cuts and deregulation that the plutocrats want. I don't expect any change in policy from the Cons, regardless of who wins the leadership.

Thanks for the link, Cap. For me coffee -- which I got used to -- was an acquired taste. I've never acquired a taste for conservatism -- at least as it is presently defined.

To see those stats of forty percent this and that, one must wonder what percentage of the Conservative base are religous zealots who truly believe and cannot separate church and state from their political lives. I mean we have the laying on of hands on a murderous maniac down south and questionable evangelical Alberta leadership , the ex federal opposition leader is a staunch religous nut and even Harper was a bible thumping liar. It makes one want to scream.

This is not the Progressive Conservative Party, zoombats. This is Ernest Manning's Party. And it shows.

Abortion is about the control of women. If you belong to the group who wants to control women, you're most likely anti abortion. the information outlined above is something which ought to be put out their during election time. Its not new to me, but then I remember equal pay for equal work and then equal pay for work of equal value. Those who didn't think that was necessary also were usually compulsory pregnancy people.

The Conservative Party did drop the word progressive. Scheer was the wrong person for the job and he was the problem. the secondary problem was the party. Now, if there is a new leader who has more appeal, it could be the Conservatives become the government in the next election and women are going to find they are going to have a problem regardless of what the Conservative party leader says. The clock could be turned back as fast as the American clocks have been. The only saving grace we have, is we still have a decent Supreme Court of Canada, although harper did try to play around with that also. He is the "clown" who appointed Vic Toews to the bench.

.. thanks re the hotlink Owen.. its an important article.. and The Tyee impresses me a ton.. an extremely valuable source for any coherent Canadian. The comments to your post are very interesting.. and how they expand into the post and article.

Lateral thinking - problem solving (Edward de Bono) suggests a solution to a problem may be provided within a properly asked or framed question. So what is the problem - first.. and how to ask or frame it ? Here's my crude or rough attempt at such a question

Is Canada's governance.. at both Federal and Provincial levels a viable organism ? And if an entity such as Canada is consuming or being consumed by a toxic or parasitic organism how may Canada (Canadians) change and improve its diet from fatal result to healthy result?

I recall the term 'Best Practices' .. there are many examples. In all fields of endeavor it seems there are persons 'doing it better' .. or safer, or faster or more creatively & sharing that expertise. How do we stimulate or enforce adherence to such a common sense practice ? Let me know when you find a political party, its membership, its elected candidates embracing or driving such an approach. Also let me know if you feel our archaic political system is able to speedily accomplish the task (or if ever).

I look at the current Canadian 'conservative' Party entity as many look upon tobacco or asbestos or fentanyl. OK, some may see it as a holy, blessed guiding light.. a paragon of virtue. the true christian pathway to the Rapture. Invested with power, Ontario and Alberta are showing us otherwise. Its astonishing to watch! Jason Kenney and his holy Ministry Of Truth, Doug Ford huddling in his basement rec room eith Charles McVety ! Pierre Poilievre clamoring 'its my turn' as Andrew Scheer is being turfed from his 10 year magic carpet free ride on the taxpayers dime... yet both have become multi millionaires somehow. This is 'healthy' or best practice ? I think not.

We need a rude slap in our collective woooly mammoth heads as we gaze longingly at swimming in the sunny Alberta tar sands.We need 10 more Tyees, 10 more Michael Harrisses, What in the fluck is Marilyn Gladu doing in OUR Parliament ? Or Senator Batters. Why is Gerald Butts 'advising' OUR elected Prime Minister ? What ? He's the 2nd coming of Ray Novak ? All these people 'work for us'.. but we really don't know how to be effective employers nor do we have a shred of control to learn do so. We outsourced our common sense to the likes of Matt Wolf, Arthur Hamilton, Bill 'job churn' zillionaire Bill Morneau.. and thugs like Stephen Harper and PostMedia's Paul Godfrey. We have let religion wrap itself around 'governance' and 'Public Service' until we can't see where one begins and one ends.. Its dogma ? Or dog poop ? Or both all a'twonce .. If 'Power Corrupts' .. truly now we are looking upon Corruption.. and failure.

Scheer will soon be gone, e.a.f. And so the party becomes front and centre. It looks like they'll pick another version of Scheer. They change the face of the leader. But the party itself doesn't change.

Political policy these days has -- as you suggest, sal -- become politcal dogma. A politician I admired, Mario Cuomo, eschewed both the labels Liberal or Conservative. He called himself a "pragmatic progressive." That works for me.

salamander, why people "allow" all these other employees, is the same reason people turn over their condos and strata's to companies, who frequently then begin to rip them off and run it as if they, the company owned the complex. its the same mind set. Let some one else deal with it. its why some send their kids to boarding school or hire nannies--let some one else deal with it. It is often too late by the time people figure out what is going on. Even if we had more Tyees, there is no reason to believe people will read the material. You can lead a horse to water, but you can't make it drink.

As my wife is fond of saying, e.a.f, you can't fix stupid.