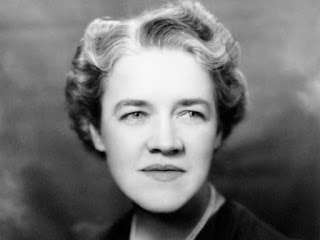 She took on Senator Joe McCarthy, denouncing his vicious demagoguery before anyone else had the courage to confront his campaign of bigotry and hatred.

She denounced the bitterness and selfish political opportunism of McCarthy, a fellow Republican, writing that Americans were sick of seeing guilty people whitewashed. Instead of cover-ups, smears and witch hunts, Senator Chase Smith urged her fellow senators not to think of the next election but of their country; think, that is, not as politicians, U.S. senators, men or women, but as Americans.


The current Republican Senator from Maine -- Susan Collins -- does not appear to be haunted by Smith's ghost. And the rest of the Republican senators appear to have forgotten who she was:

In plain English, the Senate Majority Leader is working hand-in-glove with the defendant in this case, a state of affairs so egregiously unjust that it even bothered Republican Senator Lisa Murkowski. It is a fish that stinks from the head.

That much should have been crystal clear before the impeachment process moved to the Senate. McConnell himself said on national television that he was “not impartial at all” in the case under consideration. Senator Mark Meadows said the same thing, telling CNN’s Dana Bash before the opening arguments of either side had even been heard, that what the House managers were presenting was a “false narrative.”

My question: How could either of these men take the oath administered by the Chief Justice to be impartial jurors and judges in the Trump impeachment? They both swore to “do impartial justice according to the Constitution and the laws, so help me God.”

How could Senator Lindsey Graham be sworn in with those words when he said before the process began, “I have made up my mind. I’m not trying to pretend to be a fair juror here.”

It is puzzling that no Republican juror was challenged before taking the oath because of previous prejudicial statements they made about the House case against the president. Had that been done, Chief Justice Roberts would have had to make a ruling, as reported in The Hill. How could the presiding judge not have ruled to remove a juror like Senator Graham for uttering a false oath? Or the others?

Instead, no one was challenged, and the kangaroos are running wild in Trump’s impeachment trial. The sad arithmetic of injustice is 53 to 47, the size of the Republican majority in the Senate. It only takes 51 votes to acquit President Trump. That is exactly what they will do just as quickly as gall, corruption, self-interest, and Executive coaching will permit.


Americans will have one last chance to save their republic -- in the upcoming election. To do that, they'll have to take out Trump; but they'll also have to take out the Republican Party -- because there are no Margaret Chase Smiths left in that party.

That's true, Owen, the GOP is a lost cause, but it's too late to excise the cancer. The authoritarian metastasis has spread deep into the state legislatures, the court system and the Congress.

We used to talk about the authoritarian tendencies of conservatives, but the GOP has wholeheartedly embraced a fascistic “will to power” philosophy. They're not interested in good governance through rational debate, their goal is total domination and crushing any opposition.

Despite being the most corrupt and incompetent president the US has ever had, Trump maintains a baseline support of 42 percent. In other words, 42 percent of Americans don't care about the rule of law so long as their party continues to hurt the right people - women, people of colour and the LGBT. Factor in the inability of the Federal Election Commission to act on election fraud (it lacks quorum and Trump refuses to appoint new commissioners) and SCOTUS decisions that refuse to address gerrymandering, eviscerate the Voting Rights Act and allow unlimited and anonymous election spending, and it's highly likely that the GOP will continue to hold the Senate and even the presidency.

We'd best focus on ensuring that the cancer doesn't spread across the border.

Has there ever been such a demonstration of mass gutlessness in the free world? Most of them are participating with a straight face and no embarrassment. It's a triumph of scabbery in the extreme. What would John Wayne think of the leadership qualities on display in the Republican Party?

Washington is coming to resemble Rome in the years prior to the collapse of that empire. The judiciary is deeply compromised, the "bought and paid for" Congress has succumbed to corruption and the emperor/president is unhinged. The comments attributed to McConnell and Lindsey Graham demonstrate that they're not even concerned about masking their corruption. They put it on public display for all to see.

What possible good can come from something like that?

God help us if it spreads across the border, Cap.

Wayne was a good actor, John. But I'm not convinced that he was the kind of guy who would see things through.

Good question, Mound. When it comes to corruption, it's now on shameless display.

Spread here? At least the plebs in Rome didn't kid themselves. All the Harper needed each time was one RCMP Commissioner or a future GG. Just one guy and our dumbed down electorate. Endex. No hearings and deliberative bodies to get in the way here. No, sir. Thank you for your time and attention, gentlemen. Now bugger off and let us get on to the next one or two or three. See you there. We'll be there with bells on.

It's all of a piece, John. Essentally, the argument is that authority is conferred by Divine Right.