It's All About The Money 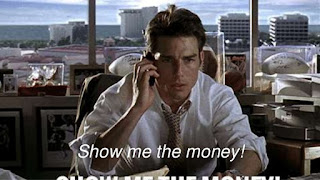 The Toronto Star has uncovered a document which clearly elucidates the Ford government's vision of education in the province of Ontario. Rob Ferguson and Kristin Ruchowy report that:

A “confidential” government document obtained by the Star shows Premier Doug Ford’s government considered keeping online learning optional until 2024 and planned to slash school board funding while creating courses to sell to other jurisdictions at a profit.


Online education has distinct advantages. Not every student can do well in a standardized system. But what is most revealing is the advantages the Fordians saw in online courses:

The document also called for a commissioning process to create a new delivery entity to maintain and create a catalogue of “gold standard” online courses in English and French so that “maximum revenue generation may be realized.”

Under the heading “cost saving and revenue generation,” the document noted “the system does not generate any revenue for the province” and warned “costs for creation of online learning tools and resources may be duplicated across multiple delivery partners.”

The plan directed the education ministry “to develop (a) business model to make available and market Ontario’s online learning system to out-of-province and international students and examine feasible options for selling licensing rights to courses/content to other jurisdictions.”

After that, there would be “continued cost saving of $57.4 million annually with full catalogue of online ‘gold standard’ courses,” the plan predicted.


Put simply, the plan was to cut costs and eventually generate out-of-province profits. Forget a public education system that undergirds democracy. It's all about the money.

Image: SlideShare
Posted by Owen Gray at 9:17 am

.. no hard feelings towards Doug Ford, Stephen Lecce, Charles McVetey and many others.. BUT.. methinks these people created their own distinct 'backtrail' .. Backtrail to me is who you are, what you did.. call it 'history' or call it 'record of passage'.. in certain aspects it may be be part of your 'credentials' or experience - proven capability etc. To a professional tracker or credible journalist or researcher.. its a reflection of who you really are.. and how you got there. Andrew Scheer is a great current example.. as is Stephen Harper.. Stephen Lecce is a classic as well

Let's take a superficial look.. ask a question or two shall we ?

What has he been up to after The Harper Government aka the Government of Stephen Harper was defeated ? What was he up to after University ? Wikipedia sure helps. First.. how did he support himself the last 4 or so years ? How did he support himself post- University (Poli Sci Degree) He went straight from UWO to Harpers political scene and eventually the PMO vicinity.. just as Ray Novak did.. eventually Lecce was jumping back and forth from the PMO to the Fantino byelection office in Vaughn region, and again in the main federal election. Where are the 'educational' credits or credibility of Stephen Lecce ? How did he support himself as a single adult.. other than via Canadian taxpayers via Harper ?

BTW .. it was against Canada's Election Laws for him to jump back and forth from PMO to a riding campaign and vice versa.. yet he did so twice. Is he independantly wealthy.. ? Was he an employee of the so called Conservative Party Of Canada ? His backtrail intrigues..

Online courses are far more standardized than in-class courses, so the idea that they would benefit students having trouble with standardized education is a joke. At best, online learning offers time flexibility, useful for adults looking to complete high school while working, but benefiting few teens.

Online learning gives up the personal interactions between students that are important in forming human relationships, as well as the mentorship opportunities with teachers. It eschews having to be at a specific time and place for learning, which provides structure to student days and readies students for the traditional pattern of the workplace or higher education. And it discriminates against students who lack internet access either because they're poor or live in rural communities. In short, it's a poor substitute for schools and teachers.

The focus on making money is typical in politicians who think government should be run like a business. It shouldn't. Governments are there to provide public goods, not private profit.

Lecce appears to be a "lifer," sal. Life long politicians -- from youth to old age -- have become as common as snow in the winter.

Your last sentnece hits the mark, Cap. Government shouldn't exist to turn a profit. Its function should be to provide public services.

Enough is enough. Teaching salaries are too big a target to resist. It's time too expose the entrepreneurs and lobbyists who are actually behind this proposed raid on the treasury. This online crap doesn't even work for a lot of post-grad learners. And that's not where it will end. The racketeers promoting this to the buffoon and his flunkies are already formulating the proposals they'll submit to clean up the effects of the shit they're selling now. It's all in the libertarian playbook. The opposition should take the time to read it someday. Don't they get it or don't they even care?

We've known for decades who Doug is, John. None of this should surprize anyone.

Clearly, Owen, should the people give this collections of clowns a second mandate, the fate of Ontario will be sealed.

Your comment really had me asking myself: "Self", I asked, "I wonder what actual human relationships Harper ever formed in his whole life?" Have to admit... I haven't received an answer yet.

Do you mean Harper or Ford, Lulymay?

All about the money. no surprise there, but in my opinion, it wasn't going to be money for the provincial coffers, its meant to be money for the corporate coffers. Buying the system from American corporations could have provided kick backs for the Ontario politicians. I'm sure Betsy Devos and her corporations and friends would have been there to help Ford and friends along.

this e learning wasn't going to work for the vast number of students, especially those with second languages and learning disabilities. it would however, provide an uneducated class of people who would work for very little money, given they had no alternative.

What you learn in school is how to get along with others, get an idea of how others live, elsewhere in the world, or around the block. Schools have teachers, who are highly trained and can spot children with abuse issues, learning disabilities and provide assistance. Teachers act as mentors some thing no computer will ever do. Teachers teach things like compassion, caring, all those things some children never learn at home. e learning, etc. is just another way to remove unionized teachers from the system because unionized teachers are a block to those who would turn this country in the mess some of those American states are in due to a poor education system.

Ford's advisor, Gordon, el gordo, Campbell didn't do anything positive for the education system in B.C. and didn't fund it adequately. wouldn't even provide adequate funding to keep schools from collapsing during an earth quake, he was just about dismantling unions, cutting taxes for corporations and trying to make himself feel better about what a piece of shit he was. Now he has Ford's ear so good luck with the education in Ontario. It will be defunded, teachers positions will be cut, teachers' aides will be eliminated, schools will be closed, courses cut, school properties will be sold, the list goes on. good luck.

the people of Ontario voted for Ford, how they can learn to live with it, while their children don't learn at all.

Ford's western partner in slash and destroy, Jason Kenney cut the provincial forest fire unit which repepelled into forest fire areas, all sixty of them. B.C. hired those not going to the U.S.A. or Australia. Kenney and Ford the two dumbest politicians in the country.

Your last sentence hits the nail on the head, e.a.f.