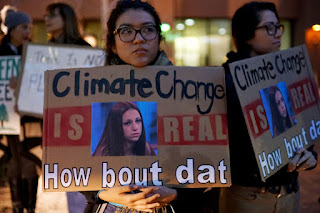 Robin Sears wonders if Canadians can come together to fight climate change. He writes:

Great social change rarely succeeds as a partisan project. How did we forget that lesson where the climate crisis is concerned? It is not clear when it became a partisan club wielded by progressive activists against “knuckle-dragging” conservatives. It was not true when Margaret Thatcher was an early acid rain pioneer, or when Jean Charest fought for real environmental change at the Rio Summit, or when Brian Mulroney fought hard on CFCs.

But sometime around the turn of the century many conservatives around the developed world decided that the climate crisis was an overhyped partisan attempt by the left to force bigger government, higher taxes and wealth distribution to the Third World from rich nations. The hapless Australian conservative leader brought a large chunk of coal into his parliament and slammed it defiantly on his desk. Donald Trump bragged how much “Trump Digs Coal.”

Progressives wear a lot of the blame for this increasingly adolescent war of torqued rhetoric and insult. Little deference was paid to the millions of working people around the world whose lives depended on their jobs in oil and gas, coal mining and the forests.


The divide is deep. And it will take a lot of effort to bridge it:

So now it is the task of every responsible Canadian politician to begin building rather than bombing fragile bridges across the climate divide. Federal politicians should refrain from sneering at those who disagree with their approach to pricing carbon and seek possible shared paths forward. Progressives need to get much more serious about “off-carbon” economic strategies that give some comfort to the workers who will face the brunt of such a transition — as Rachel Notley attempted.

And federal Conservatives will hopefully recall their great environmental victories of decades past — protecting the Great Lakes, acid rain, CFC’s — and drop the Harper-era climate denial childish rhetoric, and acknowledge the reality that we now see the impact of daily.

Then maybe this second man-made partisan climate crisis — the one that makes progress impossible, by holding real change hostage to partisan tribal warfare — can be over. As we did on equal marriage, on linguistic and Indigenous respect and reconciliation, and on immigration, we can then begin to build a new Canadian consensus, this time on saving the planet.


The big question still remains: Can we do it in time?

Image: US News And World Report

What do equal marriage, linguistic and Indigenous respect and reconciliation have in common? The issues were decided by the courts. Politicians have become incapable of following the facts to make intelligent decisions for the country.

I agree that we that we now live in a fact free universe, Cap. But it's worth remembering that the Montreal Protocol on Acid Rain took political smarts. If we're to survive, we'll have to be politically smart.


Cap is right. The neoliberal era reduced the political caste to the role of technocrats, administrators, petit fonctionairres. Adam Smith's "invisible hand" was to be unleashed and, with that, political vision was no longer necessary or even welcome. We should thank our lucky stars that the Charter of Rights and Freedoms was implemented before the dawn of neoliberalism.

Now, when we need politicians capable of mobilizing the public and the resources of the state to fend off the worst of what could spiral into an existential dilemma we have fallen into the soft hands of milquetoasts.

Political courage these days is like a needle in a haystack, Mound. It's really hard to find. We will only survive the coming firestorm if we can summon it.