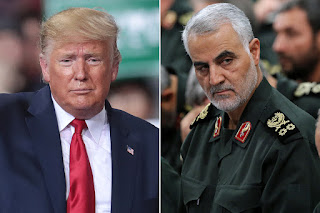 Qaseem Soleimani had lots of blood on his hands. Max Boot writes:

He has the blood of hundreds of Americans and thousands, even hundreds of thousands, of Arabs on his hands. [But] Soleimani was not the leader of a stateless terrorist organization. He was one of the most powerful figures in the Iranian government. His death makes him the highest-ranking foreign military commander assassinated by the United States since the shoot-down in 1943 of an airplane carrying Adm. Isoroku Yamamoto, the architect of the Pearl Harbor attack.


This is precisely the kind of crisis that many feared Donald Trump would blunder his way into:

The death of Soleimani, contrary to a Pentagon news release, was a hardly a “decisive” action — and, contrary to what Secretary of State Mike Pompeo told CNN on Friday, it will not necessarily make Americans safer. Indeed, the fact that the State Department is telling all Americans to evacuate Iraq suggests otherwise.

Charles de Gaulle supposedly said, “The graveyards are full of indispensable men.” Soleimani was perhaps the most important man in the Middle East, but even he can be replaced. Indeed, Iran has already appointed his deputy to fill his position, although it remains to be seen if the little-known Brig. Gen. Ismail Qaani will be as effective. The history of decapitation strikes — such as Israel’s 1992 killing of Hezbollah Secretary General Abbas al-Musawi or the joint U.S.-Israeli operation to kill Hezbollah military chief Imad Mughniyah in 2008 — suggests that they seldom debilitate the targeted organization and sometimes backfire. Musawi’s death, for example, led to the emergence of Hasan Nasrallah, an even more dangerous leader.


Israel has been assassinating its enemies for decades; but it doesn't claim responsibility for those assassinations. Trump -- who has always been a publicity hog -- is different:

By neither confirming nor denying responsibility, Israel gives itself plausible deniability and its enemies an off-ramp from further escalation. That is not Trump’s way. The Pentagon news release on Thursday night specified that Soleimani’s death was ordered “at the direction of the President.” This further increases the pressure on Iran to retaliate, as its leaders have repeatedly vowed to do.


The fat is in the fire. Somehow Donald Trump -- and his country -- will get burned.

Image: PEOPLE.com
Posted by Owen Gray at 9:43 am

Email ThisBlogThis!Share to TwitterShare to FacebookShare to Pinterest
Labels: Trump's Assassination of Soleimani

But, but, The Great and Mighty Oz has spoken, Owen. All before him must show due deference.

The man behind the curtain has been exposed multiple times, Lorne -- most recently in the impeachment inquiry. Still, he continues to huff and puff.

Perhaps it is time to recalibrate America's trigger finger. When you consider that there's one place where the occupant can initiate the deaths of tens of thousands, perhaps, as credible agencies such as the Lancet maintain, hundreds of thousands and yet that individual is never called to account, is change not overdue?

How many needless Iraqi civilian deaths were caused by America's sanctions on even medical supplies during the Clinton years? How many civilians were slaughtered in America's disingenuous hunt for WMDs during the Bush/Cheney years? What American president, other than Jimmy Carter, has not ordered some invasion, conquest or bombardment of foreign territory? Kissinger - Viet Nam, Chile. The list goes on and on.

Worse is yet to come. Here I refer to crimes against humanity caused by leaders who reject, even subvert meaningful action to fight climate change. Their people will pay a price, certainly, but long before that occurs the peoples of the poorest and most vulnerable Third World nations will be visited with a living hell. Central America is right on the doorstep of the US. Much of it is expected to turn uninhabitable beginning in the mid-2020s. Their only refuge is to escape north. That's a life-or-death choice not of their own making but America won't accept any responsibility for their plight much less allow them to cross out of Mexico.

All of these stories about what a monster Suleimani was seem like pretty cheap beer compared to what we in the West, under the leadership of Washington, unleash with such impunity.

Americans like to believe they're a "shining city on a hill," Mound. It's clear that -- for the last sixty years -- they've created several hells on earth.

“Somehow Donald Trump -- and his country -- will get burned. “
But how much of the world, and indeed his Canadian neighbors, will get caught up in the conflagration is the question Owen?

Given the power and reach of what we now call "cyber warfare," Rural, the collateral damage could be catastrophic.

When you consider Israel, Obama, and Bush decided not to try to kill Suleimani, you know they thought it would be too dangerous in terms of blow back. Trump is too stupid and mentally deranged, in my opinion, to take any of this seriously. it has been reported on Politico, Daily Beast, etc. that trump was bragging at maralago about "events to come--something big" to guests and others. It is alleged he notified Israel, but not Pelosi.

Suleimani was a military leader of a country,. which saw its self as imperiled by western countries, especially the U.S.A. It was his job to defend his country and he did that job very well. We may not have liked it, but he did do a very good job.

Now as to who is the "worst", lets review things. We had Portugal, Spain, Belgium, the Netherland, England all who brought great death and destruction to other parts of the world, killing and/or enslaving other populations and stealing those countries blind. Then the U.S.A. got into the game. They got into the game early by murdering the Indigenous populations of what is now the U.S.A.
How many deaths did the U.S.A. cause in Vietnam and other parts of Asia. We know what the U.S.A. did in South and Central America, the list is endless. We ought not to get too exercised about Suleimani's record. its most likely much less than other countries. What is the problem is Suleimani's targets were westerners who have always viewed themselves as the top of the heap. How dare those people of colour or brown skin or Arabs or Persians kill us white folk. that is essentially, in my opinion the real issue in the minds of these Americans who rail on about Suleimani.

One report advised Suleimani had already appointed his replacement some time ago. We can expect he will continue his work. Unfortunately the U.S.A. does not have this depth of knowledge because trump keeps firing any one who opposed him or comes up with a different view point. their foreign affairs dept. is running a tad thin on people with an intellect suitable for the positions. The U.S.A. is being run by an idiot. we can only hope the Court of the Hague take action against trump and charges him with war crimes.

His boasting of targeting Iranian cultural treasures, if Iran seeks revenge, is a war crime. the president of the U.S.A. is so stupid he doesn't know that destroying cultural treasurers is a war crime. Now how is that going to turn out. We can only hope Iran has a long look at what is causing the problems and eliminates those problems, not the country. Given Iran has been rather creative over the years trump may see some of his properties destroyed, some of his financial backers destroyed and even some of his golfing buddies and family members.

Trump is now in the same league as Putin, going around killing their enemies when ever they feel like it. Wait until Trump starts doing it on home turf and don't think it won't happen if he is re elected.

This is yet another reason to impeach and remove Trump, e.a.f. But Americans are not wise enough to take that step.

Trouble is and always has been that the one with the city on it, whether shining or otherwise, isn't the only hill they brought.