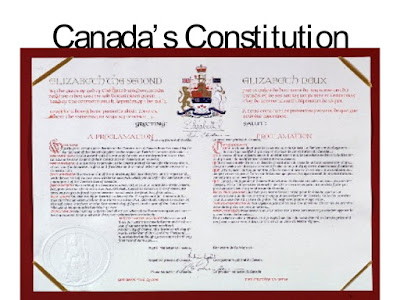 For the last thirty years, Canadian politicians have been pretty quiet about the constitution. But, recently, it has been pushed front and centre by three of the provinces. Susan Delacourt writes:

Three provinces — Ontario, Quebec and Alberta — have taken some runs at the law of the land in the past weeks.

First it was Quebec, declaring it would be unilaterally amending the Constitution to declare itself a French-speaking nation — an idea that saw some spirited, welcome discussion in the House of Commons on Tuesday.

Quebec’s bold move immediately got the endorsement of Alberta’s Jason Kenney, who has his own plans for a constitutional broadside — a referendum planned for this October in a bid to have the equalization program hauled out of the Constitution. (Campaign workers are going to need that lead time just to fit the slogans on banners for rallies.)

Meanwhile, in Ontario, Doug Ford has turned the province into a constitutional dissenter for the first time in its history, invoking the notwithstanding clause to crack down on election spending by third parties.

It's interesting that this storm is brewing at the end of the pandemic. In the case of Ford and Kenney, one suspects their actions are an attempt to create a diversion away from their failures during the pandemic. In Quebec, the constitution is never far away from any political discussion.

So far, Justin Trudeau has kept his powder dry. But one Liberal MP from Quebec -- Anthony Housefather -- stood in the House of Commons last week and brought the constitution into the spotlight:

In a heartfelt, well-researched address to the Commons on Tuesday, Housefather said that what Quebec was proposing was a serious matter for all of Canada.

“They are not documents or concepts to be taken lightly, but to be approached thoroughly, transparently and with the best interest of the federation at heart,” Housefather said, citing legal opinion that Quebec needs more than a rubber stamp from the rest of the country. “These are not conversations that happen in one day, but rather require time, reflection and public debate. Our Constitution and Canadians deserve nothing less.”

Canadians have never thought of their constitution as a sacred document. Unlike Americans, our constitution does not purport to guarantee "life, liberty and the pursuit of happiness." We'll settle for "peace, order and good government."

But that doesn't mean that we won't fight about those things.

Email ThisBlogThis!Share to TwitterShare to FacebookShare to Pinterest
Labels: The Constitution -- Again

The Notwithstanding clause was the crow that Pierre had to eat to get the Charter & BNA replacement done.

Now that compromise may compromise the country. If only Jr's IQ was equal to his EQ.

Thomas Jefferson argued that each generation should have the “solemn opportunity” to update the constitution “every nineteen or twenty years,” thus allowing it to “be handed on, with periodical repairs, from generation to generation, to the end of time.” Jefferson foresaw the problems of being ruled by the dead hand of the past, however neither the US nor Canada followed his advice.

Instead, Canada cobbled together a kludgy three-part amendment formula, virtually guaranteeing court squabbles about which formula applies. As a result, there have been seven minor amendments that affected only one province. There have been four amendments to matters within federal jurisdiction. And there have been no amendments using the unanimity formula, which for some reason is needed to get rid of a foreign monarch and her syphilitic spawn.

We're now two generations away from the repatriation of the constitution, and we really should have a constitutional convention to discuss changes.

The name's the same, PoV. But there are more differences than similarities.

We can't avoid those discussions, Cap. On the other hand, there's no guarantee that they'll go well.