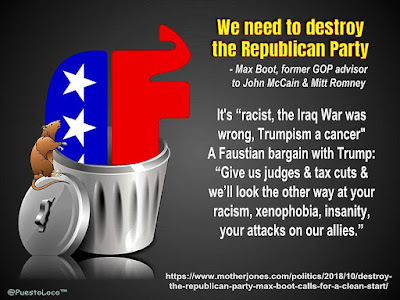 The latest numbers on vaccinations in the United States are gobsmacking. Jennifer Rubin writes:

The latest numbers on vaccination rates are telling: Mississippi has the lowest percentage of vaccinated residents, followed by Alabama, Arkansas, Wyoming, Louisiana, Georgia and Tennessee. All except Louisiana have both Republican governors and legislatures, as do the next seven on the list. Among the 14 U.S. senators representing the bottom seven, only two (both in Georgia) are Democrats. The Post reports, “Ten states, concentrated in the Deep South and rural West, report fewer than 35 percent of residents are fully immunized.”

And, when it comes to healthcare in general, it's the same story:

Health care in these deep-red states is generally dreadful. Among the 12 states that have neither expanded nor voted to expand Medicaid, all but three have GOP governors and in those three (North Carolina, Kansas and Wisconsin), a Democratic governor faces a GOP legislature.

By these or just about any other measures, Republican states are failing to meet the basic needs of their residents. Among unvaccinated Americans, infection rates are climbing. More will get sick in those places, and some will die. Republicans are unwilling or incapable of meeting the challenge.

The simple question is why?

As Reason Magazine’s Peter Suderman wrote recently for the New York Times, the GOP “no longer has a cognizable theory of government.” They claim to be economic populists but oppose raising any taxes on the rich and corporations, decry union organizing and attempt to repeal the Affordable Care Act. “Freedom” used to be a central theme, but they are on a crusade to criminalize abortion and compel unwilling women to endure nine months of pregnancy — even in cases of rape or incest. They are also in favor of ordering teachers not to teach unfavorable facts about America.

One might wonder from time to time why Republicans even bother running for election. Because they have so little interest in governing (other than in protecting tax cuts for the rich, shielding the gun lobby from reasonable regulation and dictating women’s reproductive choices), they might as well take on the role of social media trolls and right-wing media guests full-time.

There is one simple reason why they run:

In truth, a great many Republicans simply like to be “important people” with the perks of holding office. It seems the notion of finding other work causes them to break out in a cold sweat, so they adopt insane MAGA positions so as not to offend the mob they helped rile up. Certainly, there are true believers who believe Trumpian rubbish and take right-wing TV hosts’ conspiracies as gospel, but they are a distinct minority. Time and again, we hear from Republican dissenters that most of their colleagues do not really believe the MAGA party lies; what they believe in is the necessity of their own reelection.

The GOP and their Canadian Con cousins are no longer conservative parties. Fiscal prudence is long gone, as these parties inevitably run staggering deficits. Respect for "law and order" and the rule of law are gone too, as these parties consistently flout constitutional boundaries and institutional norms. As Rubin points out, they are no longer even interested in the job of governing, having outsourced the work of writing laws to business lobbies like ALEC. The real fame and fortune is now in performative "owning the libs," meaning doing the opposite of what they think liberals want then crowing about it on right- wing media. They've thrown peace, order and good governance out the window. It's beyond me why anyone would elect someone who's not interested in doing the job.

That's precisely the point, Cap. They don't want the job. But they think they'll bask in adulation.

.. surfer dudes on the leading edge to oblivion..
aka 'the vanishing point'

They're riding a wave, sal. And it can not only sink them but the whole country, too.

The only thing I can hope for is that the unvaccinated by choice will kill themselves off. Making the world safer for the rest of us. After all in the land of the free surely the best choice is that the free do us all a favour!

I know it's a nasty comment but I don't know how to say it politely.

You have a point, Ben. Let's hope they don't multiply.

I really wonder about that last point, that many of the Republicans don’t really believe the MAGA line. Maybe its true to an extent. I can certainly see why most people want it to be true, but I think it’s more complicated than that. As I read some time ago, you can use wrestling terminology for this. Separate the Republicans into Smarts, Marks and Smarks. The Smarts are the straightforward cynics that know the election fraud claims are just kayfabe, but only care about the power. Marks are the people dumb and naïve enough to belief the claims. The interesting, and in this case dangerous ones, are the Smarks. They are the ones who know in a literal sense that the claims of election fraud aren’t true, but still believe they are “true” in a deeper sense. That the only reason Democrats are winning is because they are stealing the elections via various forms of manipulation and identity politics and so forth. So they go with the election fraud lie to keep ‘those people’ who are misled by those nasty Democrats from skewing the results by voting. They may not believe the Big Lie, but they believe it tells the right story and they need to do what they can to ensure the ‘right’ people are in charge. Maybe the Marks are actually just a small minority of the Republican Party, though I have my doubts, but the rest are most definitely not Smarts, however much people like Jennifer Rubin want it to be true.

However you slice the party, BJ, the word "smart" doesn't really describe them. If they were really smart, they would see the danger that all of this bafflegab poses.