The Clouds Are Still There 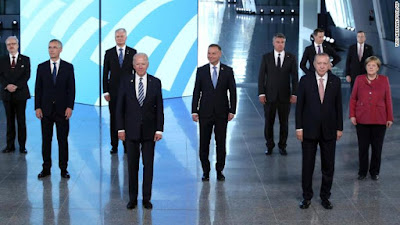 The claim that “America is Back” seems to have some merit.  Various global leaders, including PM Justin Trudeau, spoke of a renewed hope that in a time of great challenge internationally, the United States has moved back into the pole position to direct diplomacy, partnerships, and the more complex work of confronting democracy’s deniers.

A distinct sense emerged that a renewed energy was infusing the G7, prompting them to speak of upgrading a united COVID response, of cooperating on the ever-present climate change challenge, and recommitting to opposing pro-hate movements.

But the clouds are still there -- because there are two Americas. There's Biden's America and Donald Trump's America:

Though a collective sigh of relief emerged from the numerous meetings in Europe, the reality remains that Donald Trump is far from gone.  That was apparent this week as Biden worked hard to overcome the damage of the past four years with America’s friends.  While repeatedly stressing his “America is Back” mantra, it’s also true that Donald Trump is alive and present.  Republicans have failed to move on from the Trump era, making him a continuing player on the global stage.

As outgoing German Chancellor Angela Merkel put it in her final statement of the G7 sessions: “Look, the election of Joe Biden as U.S. president doesn’t mean that the world no longer has problems.” Some of those problems have to do with the fact that with the past President still active, there remains a troubling uncertainty that the America of Trump still exists, a kind of mischievous interloper.  Should the American mid-term elections next year swing away from the government, as is typical, both the Senate and the House could once again be dominated by Republicans, making delivering on Biden’s plans a great uncertainty.

So much depends on the mid-term elections. If Trumpism emerges victorious from them, the world will be back in the swamp.

Email ThisBlogThis!Share to TwitterShare to FacebookShare to Pinterest
Labels: Biden's Trip To Europe

World leaders aren't fooled by Democratic claims that American democracy is back. Democrats claim to hate what Trump and McConnell stand for, but they sure aren't taking action to prove it.

Across the country, Republican state legislatures are passing laws to make it more difficult for Democratic supporters to vote and to allow Republican legislatures to overturn outcomes they don't like. Democrats won't bring a whipped vote to eliminate the Jim Crow era filibuster and pass a new voting rights bill. Democrats aren't interested in prosecuting the crimes in office of Trump and his henchmen, guaranteeing those crimes become the new benchmark to beat.

In the US, the parties may change, but the oligarchs' agenda does not.

Biden said yesterday that the proof was in the pudding, Cap. What applies to Putin also applies to him.

Abraham Lincoln warned his countrymen that a house divided against itself cannot stand. The civil war ensued a couple of years later.

Ah! American leadership! "the United States has moved back into the pole position to direct diplomacy, partnerships, and the more complex work of confronting democracy’s deniers."

Like the decades-long support for racist Israel and its apartheid regime? Like the decades-long support for the misogynist, monarchy of Saudi Arabia? Like the insane, pointless drive to surround Russia with a hostile NATO alliance? Like the hypocritical "Lima Group" formed with Latin American dictatorships (including out-and-out fascist ones) as well as craven lapdog Canada, to suppress Venezuela's Chavista government out of B.S. concerns about democracy and human rights abuses there? Of decades-long funding of Colombia's narco-gangster state? Of fomenting coups and fraudulent governments in Honduras, Ecuador, Haiti and Nicaragua?

Anyone who thinks capitalist dominated liberal governments re-joining a voluntarist, toothless document like the Paris Accords is a great day for humanity needs to change their reading list.

Name ONE international effort led by the USA that has produced any genuine good significant enough to cancel out its destructive actions since the year 2000.

The divisions aren't geographical this time, Mound, they're theological. Politics in the United States has moved into the realm of religion.

I can think of one, thwap. The Marshall Plan was a very good idea. But that was long ago . . .