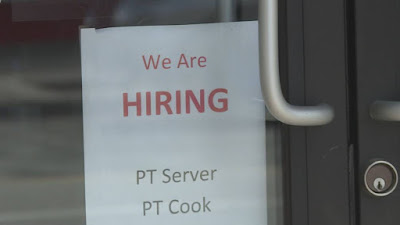 The US Chamber of Commerce is warning of a crisis affecting businesses “across every industry, in every state”. Angst is spreading about a lack of workers in Germany’s hospitality sector, and there are comparable issues in other countries such as Norway, Australia and Singapore.

Meanwhile, despite unemployment at 1.6 million, the UK is experiencing its own labour problems, partly caused by the fact that 1.3 million foreign nationals have left the country in the last year. As consumer demand surges, hospitality businesses don’t have the staff to keep pace, and shortages are also mounting in construction, road haulage, food processing and fruit and vegetable picking.

Several things account for these shortages. In Britain, Brexit and COVID are very much to blame:

Restrictions on travel within Britain due to Covid are part of the explanation – but Brexit and the ever-more hostile approach to immigration by Priti Patel’s Home Office are also factors, as suggested by what Rogers has heard in south Devon. In that context, the recent spectacle of the Brexiter founder of the Wetherspoons pub chain, Tim Martin, moaning about his sector’s recruitment headaches and demanding “some sort of preferential visa system for EU workers” was grimly hilarious – – though as I know from bitter experience, time spent in his pubs rarely assists one’s powers of coherence and consistency.

But, at the heart of everything, is right-wing government policy:

We all know how western economies have been run for the last couple of decades. Wages have stagnated, as exploitation and precarity have increased. This has been partly enabled by the transfer of manufacturing to countries where wages are low, such as China, keeping the price of consumer goods down; and the use of workers from overseas has also played some part in keeping a lid on costs in sectors such as retail, distribution, hospitality and construction.

These are messy, difficult elements of recent history, which have mixed up questions of diversity and openness with raw economics. Woven through them are changes that coverage of the labour market too often ignores: the weakening of trade unions, and welfare states remodelled to relentlessly push people into poorly paid work. In addition, the ultra-low interest rates that have been in place since the 2008 crash have widened access to cheap credit, and made many people’s mortgage payments manageable, thus further reducing pressure for pay rises.

Like the crash of 2008, the pandemic has proved that economies characterised by these features are full of weaknesses. Worse still, in the period between these two events, these defects created seething tensions that fed into the growth of a new rightwing politics, whose figureheads are now attempting to slam the door on globalisation and the movement of people, with apparently blithe disregard for both the human and economic consequences.

However, change is in the air:

Whatever the toxic actions of modern populists, the big, long-term picture suggests that 2021’s labour problems may be an early sign of inevitable economic readjustments. The size of China’s workforce began to decline nearly 10 years ago, and wages there have increased accordingly. Across the west, working-age populations are also declining. And Covid has introduced another set of changes to economies and societies, pausing globalisation, apparently squashing birthrates and planting big questions in people’s minds about life and work. All these things may yet begin to restore at least some of the bargaining power that most employees have lacked for years.

Capitalism being capitalism, in the labour shortage’s mixture of startling numbers and fascinating human detail, it is difficult to distinguish between progress and turmoil. But amid Covid’s endless fallout, a new economic era may be messily starting, and what that will mean for our lives is something we are only just starting to understand.

Email ThisBlogThis!Share to TwitterShare to FacebookShare to Pinterest
Labels: The Global Labour Shortage

The minimum wage is always below what's necessary to survive, PoV


"The right to regulate the use of wealth in the public interest is universally admitted. Let us admit also the right to regulate the terms and conditions of labor, which is the chief element of wealth, directly in the interest of the common good. The fundamental thing to do for every man is to give him a chance to reach a place in which he will make the greatest possible contribution to the public welfare. ...No man can be a good citizen unless he has a wage more than sufficient to cover the bare cost of living, and hours of labor short enough so after his day’s work is done he will have time and energy to bear his share in the management of the community, to help in carrying the general load." - Theodore Roosevelt

Roosevelt was a wise man, Mound. The present state of his party would might leave even him speechless.

Labour shortage, eh? If only the free market offered a way of reducing shortages...

Those who favour free markets only do so when they favour them, Cap.

3:44I absolutely. Those who favour the free market want it for themselves. Anyong

Those who profit love free markets, Anyong. When someone else profits, they think something has gone wrong.