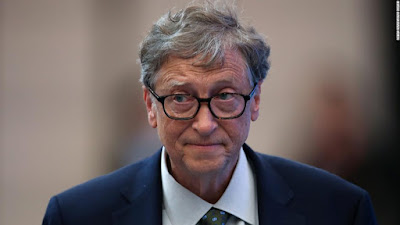 Bill Gates has spent his later years helping the world's poor. But Linda McQuaig writes that, when COVID hit, he didn't focus on the poor:

Hard to believe now, but in the first few months of the pandemic it looked like the world was going to act together to develop a "people's vaccine."

Given the scope and urgency of the looming crisis in February 2020, hundreds of global health experts and researchers converged for two intense days at the Geneva headquarters of the World Health Organization (WHO) where they drew up extensive plans for pooling global scientific knowledge in order to expedite the quest for a vaccine.

Their plan amounted to a bold rejection of the usual pharmaceutical model where drug companies carry out research behind proprietary walls, jealously guarding their "intellectual property" as they race to get a patent, which will give them a monopoly on their new product.

The multibillionaire, often described as the "global health czar," has achieved an exulted, almost revered status for giving away tens of billions of his fortune in a seemingly selfless effort to help the world.

Gates almost single-handedly derailed the plan that could have led to a "people's vaccine."

That's because, for all his philanthropy, Gates is deeply committed to protecting the rights of patent holders. He made his own mega-fortune through patents on his computer innovations and has long supported the pharmaceutical industry's claim that patents are necessary to encourage investment.

So, even before the scientific community had a chance to launch its co-operative public initiative in May 2020, Gates had put forward his own COVID initiative based on protecting drug patents and encouraging vaccine philanthropy.

Of course, the Gates-big pharma model has been a disaster, with pharmaceutical companies making astronomical profits as they dole out scarce supplies of their patented COVID vaccines to the highest bidders, leaving poor countries with little chance of vaccinating their people before 2024.

This abject failure prompted an alliance of developing nations, led by South Africa and India, to demand that patents be waived for COVID vaccines and drugs until the end of the pandemic.

For months, rich countries rejected the patent-waiver demand. But a surprise recent endorsement by the Biden administration has changed the dynamics somewhat, pushing even the Bill and Melinda Gates Foundation to support the poor countries' initiative, although Gates himself has not changed his tune.

Among other things, the vaccine tragedy highlights the danger posed by the extreme concentration of wealth and power that Bill Gates represents.

The lesson is as old as the human race itself: You can get rich by exploiting the poor. But you can't get rich by helping them.

Email ThisBlogThis!Share to TwitterShare to FacebookShare to Pinterest
Labels: Gates And Drug Patents

Here is a good article by David Olive that looks at Big Pharma and the complicit role that governments play in its predatory practices, Owen: https://www.thestar.com/business/opinion/2021/06/03/governments-need-to-stand-up-and-demand-better-from-big-pharma-even-the-covid-19-vaccine-creators.html

With government support all around the world, the drug companies are laughing all the way to the bank, Lorne. Thanks for the link.

I was reading an article this morning predicting a resurgence of globalism/free trade in the aftermath of the Covid-19 pandemic. Covid ought to have been a warning of how badly we have neglected vital resilience, the fragility we have engineered into our societies. It hasn't. Has this contagion taught us nothing? The Star article suggests that Gates et al are disaster capitalists with a friendly grin and homespun nature.

Perhaps global disasters will become the new motherlode, the El Dorado of capitalism at the cusp of the apocalypse. There was a report released this week by the Potsdam Institute warning of a cascade of environmental calamities from warming oceans to sea level rise to the failure of the Atlantic Conveyor current that has regulated the environment from Europe to eastern North America to the Amazon rainforest, all triggered by the loss of polar ice caps.

None of this matters to our leaders. They want to fully reinstate the global economy and its vulnerabilities proving that we're facing challenges far beyond our leaders' pay scale. In other words, there's nobody at the wheel - except, perhaps, Bill Gates & Company.

There are people at the wheel, Mound. But their prime directive is looking out for No. 1.

On that resurgence of globalism, one guy has been way ahead of the curve.

“Events in recent weeks remind us of the importance of the IDU’s core mission. … blah-blah-blah … It is critical that the unique voice of the global centre-right be heard. ... blah-blah-blah …

“[I]t is important that such measures [as taken] not undermine the most basic characteristics of our countries, including the freedoms of our citizenry and the restraints on state authority necessary to preserve democracy.

“We must remember that it was that lack of democratic transparency and accountability that is in significant part responsible for the problem the world now faces. … blah-blah-blah …

“As conservatives, we must also ensure that our governments do not lose focus on the economic challenge that is now coming at us as quickly as the coronavirus. … blah-blah-blah … Our populations will naturally look to the centre-right for economic answers to the coming recession and budgetary crises. At the same, as supply chains are being rebuilt and restructured, our parties must not lose sight of the importance of freer trade.”

Now, we've been meaning to talk to you about those patents.

You've been here long enough to know the face of God when you see it. You do know that if you meddle with the primal forces of nature, you will atone.

Are we getting through to you, Mr. Biden?

Mr. Harper has learned nothing, John -- nothing.

Did Bill Gates buy the original Microsoft program from a Canadian for less than 3,000. Paul Allan provided the money for development.....
Yes. Can no longer find it on Linebut do remember reading this a long time ago. Is it not a wonderment how suddenly some people become extremely intelligent after becoming billionaires? Anyong

I get the feeling that Bill Gates is stuck in a Silicon Valley/Capitalist mindset, as you say "for all his philanthropy, Gates is deeply committed to protecting the rights of patent holders". I do not think that he can conceive of a model that will work that is not of this type. IIRC, Gates has also been a firm supporter of the Charter School movement in the USA and of whatever that teacher measurement idiocy is called. The implementation of both in the USA looks to be a complete débâcle. However, both highly competitive, profit-oriented models profit-oriented work well in a highly competitive, profit-oriented environment where Gates was so successful.

Gates just does not seem to be able to adapt to new or different paradigms.

I remember once trying to epplain ta a person in private industry that failure to spent all your program dollars in a government program was a failure-it took some time.

Unfortunately, Anyong, some people equate money with intelligence. Donald Trump puts an end to that fantasy.

Gates is committed to a paradigm that COVID has exposed as bankrupt, jrk.

It is we the voters who have permitted this to all happen, when it comes to drug patents. We elected the politicians who created the laws which allows the condition to exist. There are patent laws and how did they come about Laws were created and who created these laws? Politicians. Who elected these politicians? We did.

Of course corporations want to make money. that is why we have corporations. We have patent laws and we have copy right laws, so where does the public good over rule the right of corporations to hold patents and make money off of the diseases in the world. How many medications have not been put on the market because they are too expensive for governments to pay for?

People don't care unless they personally aren't getting their medication. Yes corporations are making a fortune. Why was Israel so quick to vaccinate. They paid the drug companies $50 a dose. Other countries, could only pay $19 a dose. don't know what Canada is paying, but obviously we didn't go to the market with $50 a dose.

And the corporations know how to buy politicians, e.a.f.