The People With Deep Pockets 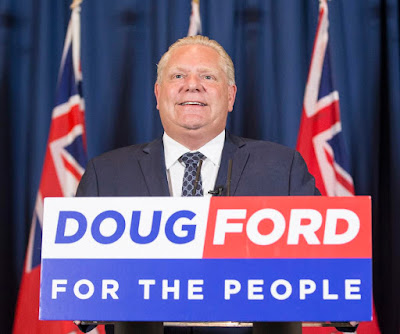 Let’s leave the clause to one side. What about the bill itself? Is it good law? Does it respect freedom of speech? Was the judge wrong to overturn it? In brief: No, no and no. It’s a terrible piece of legislation, far beyond its brazen attempt to muzzle the government’s critics. The judge was right to toss it out, but in truth it should never have passed.

Recall that the particular section before the court, limiting pre-election advertising by “third-party” groups – unions, corporations, activists of all kinds – is but one of several troubling provisions in the bill. Passed earlier this year, it raised the limits on individual contributions to nearly three times the level set by the previous Liberal government. In addition, it enriched the public subsidy to which the parties are entitled, another Liberal-era reform, which Mr. Ford had promised to abolish.

So while the Ford government defends the limits on third parties in terms of the need to keep “big money” out of Ontario elections, in fact it is content that Ontario elections should be awash in big money – as long as it’s the right kind.

It's been obvious for decades that big money calls the tune in politics. Ford opens the door to more big money:

Rather than rein in the influence of money on all sides equally, the province has taken a distinctly one-sided approach to the issue. While whatever modest restraints the parties briefly endured are rapidly being unwound, third parties find themselves subject to an increasingly repressive gag law.

Rather than regulate third parties on a level plane with the parties, the Liberals subjected them to limits that were both tighter ($600,000 apiece, a pittance beside the millions parties are permitted to spend), and significantly longer in duration: applying not just for the length of the campaign, but for six months before.

Moreover, rather than define the spending subject to regulation in the usual way, as that which directly promotes or opposes a “registered party or its leader or … candidates,” the Liberals expanded it to include taking any “position on an issue that can reasonably be regarded as closely associated with” a party, leader or candidate. It is difficult to think of an issue that would not fit that description.

It was not surprising, then, to see these restrictions come under legal challenge, well before the Conservatives came to power. But what did the Ford government do in Bill 254, even as the case was before the courts? It doubled the blackout period, from six months to a year.

The idea that a group of citizens who care deeply about an issue should be prevented from bringing these concerns to public attention is disturbing enough, even during an election campaign. But that they would be similarly proscribed for six months, or a whole year, is frankly incredible.

Ford claims he's a man of the people. The problem is that he's a man for certain people. And those are the people with deep pockets.

The more money restrictions are lifted, the more those with money will speak louder than those without. As a result, the wishes of those with money appear more popular than they actually are. Enacting those wishes becomes a quid pro quo for the party elected. In short, money cripples the ability of ordinary citizens to influence policy and to protect against corporate dominance.

The Libs were dragged kicking and screaming to enact some basic restrictions on money in politics, largely by the PCs. We now see how sincere the PCs really were.

Over a hundred years ago a New York State political boss claimed that money was the mother's milk of politics, Cap. Nothing has changed since then.

OK, I pose this query w/o any real legal knowledge of my own beyond common sense, reading & TV:

Could one of the injured parties apply to the SC & get a "stay" on the not-withstanding nonsense?

The timing seems very unfair with an election happening before this could work its way thru the courts. Even this not-with nonsense is challengeable. It is not a magic wand.

The clause has always been contentious, PoV. It would be interesting to see what the Supreme Court would do.

I love unintended consequences! OntarioProud is now subject to this legislation, unless of course there is an exemption buried so far deep that only INCO could mine it.

Of course now instead of consolidation there will be splintering of the working families groups into smaller units buying from several companies.

The sad part of this will be that groups like MADD and the Autistic Society (if there is one) will be muzzled as will any kind of intensive and expensive advocacy.

But never mind a few good accountants will be able to fracture this law into little pieces, and if the ridicule wonty kill it then the expense of enforcing it will.

I suspect that the most significant consequence of this law will be that Ford's constituency will continue to shrink, Ben.