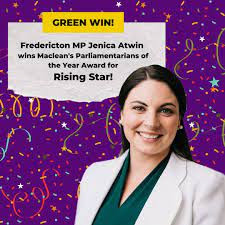 The Green Party is in trouble. Party leader Annamie Paul is not Elizabeth May. And the first elected member from the Maritimes, Janet Atwin, has joined the Liberal Party. Janet Silver writes:

Atwin left the Greens on Thursday because of disagreements within the party about the situation in the Middle East.

“Annamie and I had a communication breakdown,” Atwin told iPolitics on Friday. “To be openly attacked and not supported (was) unbearable.”

Atwin was referring to the May 14 Facebook post by Noah Zatzman, Paul’s then-senior adviser. In that post, Zatzman went after Green MPs Paul Manly and Atwin for their tweets about the Israel-Gaza conflict. In one tweet, Atwin said she condemned the air strikes in Gaza and called the situation there “apartheid.”

When Paul was asked by reporters on Thursday if she would take a stand by either condemning or condoning Zatzman’s Facebook post, Paul refused to answer.

“(I) was harassed, and there were many sleepless nights, and many tears were shed,” Atwin said Friday.

Instead of three members in the House, the party is down to two members --  which does not bode well for the future.

There are two reasons to vote Green.
1. The environment.
2. Protest vote.

All the rest is distracting to Green voters. By concentrating on woke social issues Annamie Paul is killing the Green Party.

You only have to look at what happened to Corbyn in the UK to see how defenders of Palestinian rights are tarred with false accusations of antisemitism. This is a favourite tactic of the Israel lobby designed to get people to self-censor. So far, it worked for both May and Paul. But then, when was the last time you heard a Canadian political leader condemn Israeli atrocities? Frankly, in surprised the Libs allowed Atwin to join their caucus.

The Green Party is finished. Just as the party's rise was largely Elizabeth May's doing, so too will be its downfall.

May knew full well that the GPC membership held strong opinions on the Israel-Palestine problem. She even threatened to resign when the party passed a resolution critical of Israel although she later backed off.

When she wanted to hand off the leadership to new blood, May had her thumb on the scale for
Annamie Paul who shared May's support for Israel. It was a fuze only waiting for a match and that came in the form of Ms. Paul's senior advisor, Noah Zatzman.

Annamie Paul could have but didn't fire Zatzman over his efforts to smear Paul Manley and Jenica Atwin. She didn't. The party council finally had to give him the boot.

Elizabeth May might regret her support for Annamie Paul. It's plain from a joint statement by May and Paul Manley, the two remaining Green MPs, that they're blaming the whole sorry business including Atwin's defection on the new leader.

“Unfortunately, the attack against Ms. Atwin by the Green Party leader’s chief spokesperson on May 14th created the conditions that led to this crisis. ...We (Paul Manly MP, Elizabeth May MP) have no intention of leaving the Green Party of Canada.”

With a broadside like that, it's hard to see much future for Annamie Paul in the Green Party. At this point I doubt she could win a seat in Parliament even if she could find a riding association willing to back her.

That assessment is pretty accurate, Toby. I wonder if those at the helm understand that.

It'll be interesting to see if Atwin encounters the same kind of headwinds in the Liberal caucus, Cap.

The question now, Mound, is whether or not Green voters can find a home in any of the three major parties.

What happens with the membership is unclear, Owen. At the very least Annamie Paul has to pack her bags. It's possible that a new leader could salvage something. Possible but not likely. The party needs someone younger than May and electable. Right now that's Paul Manley. Whether he'd even consider the job is doubtful.

If Ms. Paul leads the GPC into the next election that would leave me with the "none of the above" option.

The Libs are out for no end of reasons. The Cons are even less acceptable.

The NDP is the party that refused to allow Manley to run for them in Nanaimo despite his popularity with those voters. Like Atwin, Manley is a fierce critic of the apartheid state. That's how the Greens got that seat.

That exhausts the options. If an election were called tomorrow I'd cast a spoiled ballot.

Atwin's resignation might force a change at the top, Mound. But I suspect the whole process would be messy -- and it would leave lots of Green voters with a sour taste in their mouths.

I remember a while back when May made some very serious accusations on the BDS movement and if memory serves even pulled a Justin with the old antisemite label for those who dared to criticize. The leader of the Greens can scarcely convert to Judaism and not have the same viewpoint, obviously. Regarding the comments about protest votes and which party can the disgruntled Greens turn to, I can only hope that Justin will at least offer us a small electoral reform and include "None of the Above"on the next ballot. Only then can I truly vote with a clear conscience and a confidence that my vote will not be wasted and that someone might pay attention

I had hoped that Justin would do electoral reform, zoombats. Until he does, I'll vote strategically.