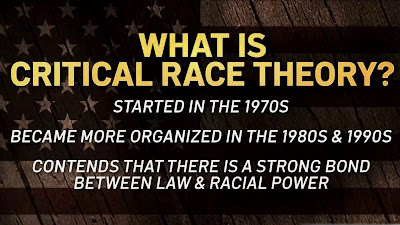 Critical race theory (at its core, the belief that racism in America is systemic) had been around for decades in academic circles without attracting much attention — until Fox News took it up last summer. As The Post’s Laura Meckler and Josh Dawsey report, a Fox News guest, Christopher Rufo, declared that critical race theory had “pervaded every institution in the federal government” — and Trump and his allies took it from there. They’ve redefined the obscure theory to include, as Rufo put it, “all of the various cultural insanities” and they’ve made it their latest front in the culture wars.

When it comes to "cultural insanities" no one can outdo the members of the modern Republican Party. Consider what Josh Hawley said recently on the floor of the Senate:

“President Biden is nominating for federal office individuals who do not share a view of America as a good and decent place,” Hawley announced. His nominees instead “believe that this is a country founded in racism and shot through with corruption.”

Hawley offered zero evidence for his claims, beyond Biden reinstating racial sensitivity training and his nomination of an Indian American woman, Kiran Ahuja, to run the Office of Personnel Management. Hawley alleged that critical race theory “appears to be her fundamental ideology.” This wild claim is based on a Boston University professor’s lecture on “antiracism” at the charity she ran, and her linking to an article of his claiming Trump’s election was an example of white supremacy.

And they voted in lockstep yesterday to not even debate election law reform. They proved that Critical Race Theory got it right.

Media: Democrats say your new nation-wide voter suppression laws are driven by white supremacy, what do you say?
GOP: The DemonRATS and their CRT are just as racist against white people!
Media: There you have it folks, both sides are dug into extreme positions.

And that's why CRT has gone from obscurity to centre stage. Just another squirt of ink as the octopus makes its escape.

The central fallacy in the United States, Cap, is the conviction that we're the best. It blinds Americans to the fact that they're less than perfect.

Racism has been integral to the American Right (first Democrat, later Republican as the parties switched political polarity) since well before the Civil War.

It has intensified now that demographic change imperils the white majority, the GOP lifeline. Repugs, at both state and federal levels, have no choice but to defend white privilege. Much was done through gerrymandering and voter suppression but now more is needed.

Jim Crow rides again, heedless of where and how this must eventually end.

When you have nothing to back your argument, conflation is your only salvation. The best joke arising from the Republicans' intellectual exercises on this question is their pathetic attempt to associate the theory with what they call "cultural Marxism". The M-L-MZT guys labelled it long ago as a distraction. In some respects they were right.

For me, it's truly depressing to see the return of Jim Crow, Mound. I foolishly thought that Americans had actually learned something.

They yell loudest about what is patently obvious, John.

Isn't it a riot when anything considered social or leftist is always a Commie attribute? While living recently in Illinois i was subject to all kinds of commie ideas and truths. I for one had never heard of the Tulsa Massacre except on the one hundredth anniversary. I never really understood what 1619 was and was interested that America didn't really start three months later when the Pilgrims landed at Plymouth Rock. We had all been taught that in primary school as we envisioned them coming ashore in their Buckle hats supping with the Indians. Instead it seems that america really started outside Norfolk a few months earlier where a few slaves were traded for some food. It's a very interesting point of view as an historical stand point. I found it also interesting that early on in the pre "Exceptional" mind set that a few enslaved Pequod Indians didn't take to slavery well and were shipped off to Bermuda in exchange for some Blacks.
I guess some Americans take exception to alternative historic accounts. One has to have read Howard Zinns "A Peoples History of the United States"to truly understand that alternative accounts leave a bad taste.

What Kelly Anne Conway calls "alternative facts" have always been there throughout American history, zoombats.

Something to add to my quotes file. :)

Unfortunately Australia is not far behind. Pauline Hanson moved for the Government to reject Critical Race Theory from schools It is unlikely she has the slightest idea of what it is.

Can we expect Pierre Poilievre or Derek Sloan to bring it up in the House soon?

There are lots of politicians who ignore Mark Twain's advice, jrk. It's better to keep your mouth shut and have people think you're stupid rather than open it and remove all doubt.