On the Brink Of Tyranny 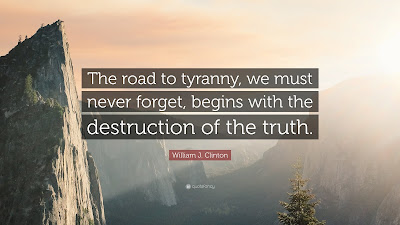 There was a time when what is happening would have made for astonishing fiction. Lawrence Martin Martin writes:

It is astonishing enough that these Republicans refused to accept the results of the Nov. 6 election and, through disinformation campaigns that prey on the gullible, are still propagating former president Donald Trump’s mythical claim that it was stolen.

It is astonishing enough that many Republican states are now taking steps to significantly limit participation in elections through measures against early voting, absentee voting and automatic voter-registration laws. Given demographic trends, the Grand Old Party seems to feel that in order to win, it must effectively disenfranchise voting blocs. It is proceeding to do just that.

It is astonishing enough that Senate Republicans blocked an independent inquiry into the Jan. 6 mob attack by supporters of Mr. Trump on Capitol Hill. There’s no need, the contemporary version of Abraham Lincoln’s party says, to probe a rebellion against the state the likes of which have not been witnessed since the Civil War.

But this isn't fiction. The story is an old one. It's called The Road to Tyranny. It has been traveled many times in the past. And it's not a wild theory:

At the policy level, Mr. Biden is on course to reverse much of Mr. Trump’s unhandiwork. It is in the political domain where the Trump legacy could be lasting and ruinous. If the designs of his party of white nationalists are carried out, that legacy could be the establishment of a democracy that’s more Putinesque than Lincolnesque.

It should be clear to anyone who can think -- just a little bit. The United States is on the brink of tyranny.

Email ThisBlogThis!Share to TwitterShare to FacebookShare to Pinterest
Labels: The Road To Tyranny

It's long been clear that the US is an oligarchy with vestigial democratic features (Gilens & Page). At this point, the Democratic oligarchs are sometimes willing to make the minimal concessions needed to maintain the facade of democracy, while the Republican ones can no longer be bothered.

Maintaining the illusion of democracy requires a lot of what pro wrestlers call kayfabe - staged rivalries and competitions for power. So we have Sinema and Manchin being the "heels" and blocking the passage of a new voting rights act. Sinema draws boos with a cute curtsy while voting down a minimum wage increase. These allow Democrats to believe that the party really wants to increase minimum wages and block Republican voters suppression but can't. In fact, if that's what Democratic oligarchs wanted, it would already have happened, see e.g. the passage of a new Covid relief bill, most of which will end up in the hands of oligarchs.

As you say, the US is on the road to tyranny, and I think it's further down that road than many believe.

It's well on the way, Cap. In fact, it's tottering on the brink.