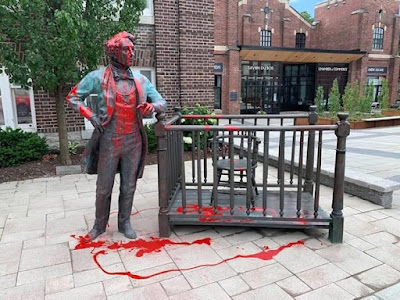 In Canada, we are trying to come to terms with one of the ugliest parts of our history. In the United States, the problem was slavery. Joe Biden went to Tulsa this week and dealt with the problem head-on. Max Boot writes:

With his speech in Tulsa on Tuesday — on the 100th anniversary of a pogrom that killed as many as 300 African Americans and left 10,000 “destitute and homeless” — President Biden offered a highly effective rebuke to the “love it or leave it” school of conservative historiography. In the process he delivered what is probably the most thoughtful presidential statement on race since President Barack Obama spoke in Charleston, S.C., in 2015 after the murder of nine African Americans by a white supremacist. Every American — and, in particular, every Republican — should listen to Biden’s entire speech, but, to my mind, this was the most important part:

“For much too long the history of what took place here was told in silence, cloaked in darkness. But just because history is silent, it doesn’t mean that it did not take place. And while darkness can hide much, it erases nothing, it erases nothing. Some injustices are so heinous, so horrific, so grievous they can’t be buried no matter how hard people try …. Only with truth can come healing, and justice, and repair, only with truth, facing it. … We can’t just choose to learn what we want to know and not what we should know. We should know the good, the bad, everything. That’s what great nations do. They come to terms with their dark sides.

That is what we must do. In our town, there is a statue of John A. Macdonald on Main Street. Last week, a vigil was held in front of it. Many pairs of shoes were left in front of it -- in memory of the children who were buried in Kamloops. And, once again, there was a cry to take down the statue. Macdonald's role in building residential schools is an indelible stain on the man. He has blood on his hands. But without him, there would be no nation.

And in TO, faculty and students alike are referring to Ryerson University as University X. The statue of Ryerson has also been painted red, with children's shoes surrounding it. Not sure why we ever thought that public statues of famous people were a good idea.

More of the same, Anon. Please initial your next comment.

The removal of statues that remind us of our past, both good and bad, should not be removed but the places used to display a broader more historically correct text. Hiding the past does little to recognize past actions that are now unacceptable.

I've often been angry with my country.
The Kamloops catastrophe has made me deeply ashamed of my heritage.

Precisely, Rural. We gain nothing by hiding the past.

We should all feel ashamed, PoV. Kamloops reminds us of our darker angels.

My hunch was that the comment was yours, Cap.

When a statue honouring a person (usually a dead person) is erected in a public place where most statues are displayed, it is wise to keep in mind what that statue may represent to everybody. If it seems to overlook an important injustice done to a segment of our society, it should be removed from that public space. A public space belongs to everybody, and should be a comfortable place for everybody. Rather, such a statue should be placed in a museum where people may see it if they wish. A plaque describing the accomplishments and failures of the person it represents should be part of the display. That way we may preserve a popular, objective, just, and useful record of our history. With deference to Clint Eastwood, we need to make people aware of "the good, the bad, and the ugly" in our past so we don't make the same mistakes in our future.

The whole purpose of studying history, CD, is to avoid repeating the mistakes of the past.

Oh, you spear-mongering Greeks
if only your intelligence could match your prowess!
This is a mindless murder -- murder unmentionable.
What did you fear in this little child?
That he would raise up fallen Troy?

Actually, yes. We can abide only those who will accept as is what is. I know what we'll do: we'll send him to a place where we can make of him an image of the powerless losers who like it that way.

In the end, it's about power, John. Those with the will to dominate need someone to dominate.

In my opinion, it was all about the money. For decades people worked for the government, NGOs, churches, etc. in these institutions, concentration camps for children, some would say it was to assimilate the Indigenous children, etc. but really it was about the money. there was no need for "residential schools" at all. Small towns had schools why not reservations? why did these schools continue until 1978? People were making money.

there was also the no small matter of all the land this country could not access because they were reservations and later, land traditionally used by Indigenous people. Kill the children and you won't have adults who have children.

If people want to use the same line as Germans did after WW II, we didn't know, just as the German's knew, so did Canadians. If not all certainly those who were involved in government. We might want to check and see all people involved in what we used to call "Indian Affairs" and these concentration camps, for children and bring them all in on murder, manslaughter, etc. and let them explain themselves. Lets not forget those who worked for churches who managed these concentration camps. Haul them all in and have them answer questions. Wouldn't recommend the RCMP, because in my opinion, they were aware, they just didn't care.

The finding of the bodies of the children will fade from the news and nothing will change regarding the lives of the Indigenous People in this country. Governments and the majority of voters don't care enough to even provide adequate drinking water. There are solutions, but they cost money and once money is involved people care a whole lot less and politicians are too invested in having a balanced budget.

Perhaps it is time we started teaching the Indigenous languages of an area in the schools. It might make people more aware that Indigenous People are Humans. That they have a culture, a language, a history.

Saying the government or whatever organization is saying it, just isn't enough anymore. There are thousands of dead children in this country and no one has been held accountable.

Precisely, e.a.f. No one has been held accountable.