Just What The World Needs 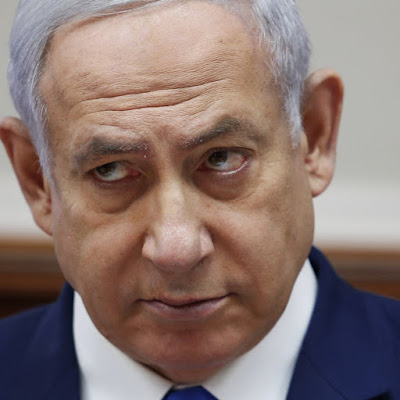 Benjamin Netanyahu has been shown his way to the exit. His leaving was very Trumpian. Max Boot writes:

You would think other democratic leaders would recoil from Trump’s odious example. Not former Israeli prime minister Benjamin Netanyahu. In leaving office, Bibi, as he is known, is showing himself to be as graceless and selfish as the Master of Mar-a-Lago. Like Trump, he refused to attend the inauguration of his successor — the new right-wing prime minister, Naftali Bennett, who leads a coalition government with the centrist Yair Lapid.

Shortly before the vote in the Knesset that confirmed his downfall, Netanyahu delivered an angry, vituperative, scorched-earth speech full of Trumpian invective. It truly has to be read for its awfulness and pettiness to be believed.

Netanyahu began with lots of self-praise before segueing into attacks on the “dangerous” new government. Although Bennett is also a critic of the nuclear deal with Iran, Bibi claimed that his former protege won’t stand up to the Biden administration like he would. He even attacked President Franklin D. Roosevelt for not bombing German concentration camps and the railways leading to them in 1944. This was by way of suggesting that the United States is again doing nothing to save the Jewish people from “extermination,” while Bibi alone protects the Jews. He claimed that Bennett “doesn’t have the international standing” to oppose a nuclear agreement — and won’t do what Netanyahu did when he spoke to Congress in 2015 against the nuclear deal.

Like Trump, Netanyahu not only ignores history, he re-writes it:

This is several orders of crazy historical revisionism. First, historians doubt that U.S. bombing could have stopped or even significantly slowed the Holocaust. Second, Netanyahu’s speech to Congress did not stop the nuclear accord — it only alienated then-President Barack Obama and other Democrats, while aligning Netanyahu with the Republicans. That partisanship has done long-term damage to the U.S.-Israel alliance.

Third, and most importantly, the Iranian threat against Israel has actually grown since Trump, at Netanyahu’s urging, pulled out of the nuclear accord in 2018. Since then, Iran has ramped up its nuclear program, while stepping up the production of missiles and drones and its support for regional allies such as Hamas and Hezbollah. Yet Netanyahu claimed that Iran is “celebrating” his downfall.

And, like Trump, Netanyahu claims that the election was stolen:

Bibi then delivered his own version of Trump’s phony claims about a “rigged” election. “The vote counting was kosher,” Netanyahu admitted, “but the winning of the votes was done fraudulently. Bennett led astray hundreds of thousands of right-wing voters and transferred their votes from the right to the left.” As if Israeli voters did not realize that in casting ballots for the parties led by Bennett and his allies, they were voting to remove Netanyahu from office. Because the new coalition government is backed by an Israeli-Arab party, Bibi accused it of being the handmaiden of “extreme Islam.“

Finally, like Trump, Bibi claimed he was a victim:

“My family and I have been through hunting, prosecution and denigration, the likes of which has never been seen,” he said. “All so that I will bow down and surrender to the left.” Just as Trump claims to be fighting for “forgotten Americans,” so Bibi insisted, “I did not surrender because I am operating in the name of a large public of millions of citizens, as the servant of a millennia old ancient people, wishing to sit in peace and security in its own land.”

Just what the world needs -- a Trumpian twin.
Image: The Guardian
Posted by Owen Gray at 8:31 am

Email ThisBlogThis!Share to TwitterShare to FacebookShare to Pinterest
Labels: Trump In Israel

the arguments are always the same in these "democracies" where 30% of the voting public have a majority. They all talk to the citizens as if their stupid.In Bibi's case if you don't support him well you are against the Jews, yada,yada yada. The truth is like many of the present day leaders/dictators Bibi is a racist,gangster, thug who has shown nothing but contempt for those who oppose him and an open cheshire catlike grin for those who don't. Take our own Prime Minister and his support of Bibi and condemnation of his own people who oppose Israel politics. BDS supporters are Antisemites yada,yada,yada. Hey Bibi. Don't let the door hit you....

.. The concept of simply being an elected Public Servant left the building with Elvis

To make a simple observation, Owen, all of these extreme right-wingers sing from the same hymn book. The other day, just like Trump, Netanyahu claimed he was the victim of "the deep state." What these people lack in imagination, they make up for in repetition.

Public Service these days is about career advancement, sal, not the public good.

And the repetition, Lorne, is simply confirmation that they're selling The Big Lie.

Thanks for this & the other recaps from firewalled sources!

I subscribe digitally to The Post, The Toronto Star, and The New York Times, PoV. I figure that, at my age, I can treat myself to good journalism.

The fat lady has not sung. Bibi got booted, sure, by a vote of 60-59. I expect he's got several ideas for how to stir things up between the unlikely coalition that ousted him. They're such a disparate bunch that they may not last.

Quite true, Mound. Like Trump, he's plotting his comeback.