Corruption Was At Its Heart 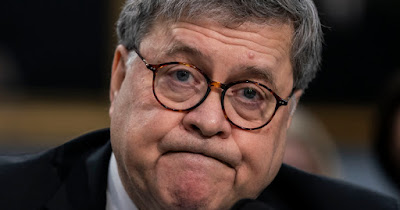 On August 1, 2019, senators Sheldon Whitehouse and Chris Coons sent a letter to the FBI, asking for information into its investigation of Supreme Court nominee Brett Kavanaugh. This week -- nearly two years later -- they received a response to their letter. Ruth Marcus writes:

It’s no coincidence that it took a new administration — and Whitehouse’s incessant prodding of Biden administration nominees — to finally extract some answers.

The letter, which became public Thursday, offers a perfect illustration of the Trump administration’s disdain for congressional oversight, and the way in which the supposedly professional FBI allowed itself to be cowed — and ultimately tarnished — by subservience to the Trump White House.

The letter discloses, and some headlines have trumpeted, that the FBI “received over 4,500 tips, including phone calls and electronic submissions,” after reopening the Kavanaugh investigation following the allegations against him by Christine Blasey Ford and Deborah Ramirez. (Kavanaugh’s original Judiciary Committee hearing had ended a few days before the allegations became public.)

What did then-White House Counsel Donald McGahn do with the “relevant tips?” That, we do know: not a damn thing. McGahn had no interest in discovering what his handpicked nominee had done, or not done. He had every interest in ensuring that Kavanaugh be confirmed, facts be damned. If there was any follow-up within the FBI itself, there’s no indication of that.

And that is the outrage here. The FBI’s investigation into sexual assault allegations against Kavanaugh wasn’t designed to uncover the truth. It was a shoddy enterprise whose mission was to satisfy enough disquieted senators — Republicans Jeff Flake of Arizona, Susan Collins of Maine — to get Kavanaugh across the finish line.

The evidence of the corruption at the heart of the Trump administration keeps piling up. Trump's lawyer, Michael Cohen, has been disbarred and sent to jail. Trump lawyer Rudy Guiliani has had his law licence suspended in New York and Washington, pending disbarment.

At the very least, Trump's Attorney General, Bill Barr, should also have his licences suspended. He should also be disbarred.

Email ThisBlogThis!Share to TwitterShare to FacebookShare to Pinterest
Labels: Barr Should Be Disbarred

We knew at the time that the game was rigged. Some of the 4,500 tipsters told the media that they'd received no follow-up from the FBI. The second investigation into Beery Bart was okayed by McConnell and Trump. Did anyone honestly believe they'd approve something they couldn't control?

No, they wouldn't, Cap. Still, the arrogance -- and ineptitude -- is stunning.

I'll never forget the look of horror on Bart's wife's face when he threw that final hissy fit during his confirmation hearing -- he was totally out of control and spitting with spite. My first thought was: she's seen this scene before and most likely in her own home. Bart is a typical bully and I have no doubt that his loyal wife has seen that side of him in spades.

I suspect that, in private, Kananaugh is no pleasure to be around, Lulymay.

Interesting observation, Lulymay. At the time of that fit, Kavanaugh was interviewing for a job. Can you imagine any other employer hiring someone after such an outburst?