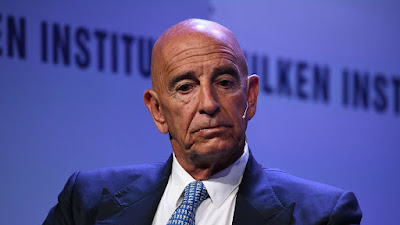 When the billionaire real estate investor Tom Barrack, one of Trump’s biggest fund-raisers, was arrested on Tuesday and charged with acting as an unregistered agent of the United Arab Emirates along with other felonies, it might have seemed like a dog-bites-man story. Barrack was once described by longtime Trump strategist Roger Stone — a felon, naturally — as the ex-president’s best friend. If you knew nothing else about Barrack but that, you might have guessed he’d end up in handcuffs.

Nevertheless, Barrack’s arrest is important. Trump’s dealings with the Emirates and Saudi Arabia deserve to be investigated as thoroughly as his administration’s relationship with Russia. So far, that hasn’t happened. When Robert Mueller, the former special counsel, testified before Congress, Adam Schiff, chair of the House Intelligence Committee, said to him, “We did not bother to ask whether financial inducements from any Gulf nations were influencing U.S. policy, since it is outside the four corners of your report, and so we must find out.” But we have not found out.

Throughout his presidency, Trump could scarcely have been a more accommodating ally to the Emirates and to Saudi Arabia, whose crown prince, Mohammed bin Salman, was a protégé of Prince Mohammed bin Zayed. Trump’s first foreign trip was to Saudi Arabia. He tore up the Iran deal, hated by Gulf Arab leaders. Of Trump’s 10 presidential vetoes, five dealt with issues of concern to the Emirates and Saudi Arabia. More significantly, he overrode Congress’s attempt to end American military involvement in Yemen, where Saudi Arabia and the Emirates were fighting on one side of a brutal civil war. According to Bob Woodward’s book “Rage,” Trump boasted that he “saved” the Saudi crown prince after the murder of Saudi dissident Jamal Khashoggi elicited widespread outrage.

And, if the allegations against Barrack are true, it all had a lot to do with big money:

In June 2018, The Times reported that Barrack’s company “has raised more than $7 billion in investments since Mr. Trump won the nomination,” about a quarter from either the Emirates or Saudi Arabia. Barrack stepped down from his executive role at that company in March, but just last week he told Bloomberg Television that Emiratis would be among his investors in a new venture involving “mega resorts” and “the hospitality industry as it relates to wellness, as it relates to health.” Americans deserve to know if Barrack essentially sold his investors influence over the foreign policy of the United States. The market for Trump scandal may be glutted, but when it comes to the role of foreign money in the last administration, there’s no shortage of mysteries.

Everything for Donald Trump is -- and was -- about money. Public Service? Who's kidding whom?

The 'establishment' doesn't like tRump cause his blatant behavior exposes what they themselves do, albeit more covertly and with better manners. And the tRump rump (approx. 30% of Americans I reckon) have been conditioned to disbelieve or simply ignore any negative news about their hero or to rationalize that 'they all do it'.

Trump says the quiet part out loud, PoV. That's the source of his appeal.

I have never had much use for the ridiculous Russia-gate story. It was too silly for anyone but US conspiracy addicts to swallow---not to say that Trump's organization was not laundering lots of money from oligarchs in several of the former USSR republics.

It seemed pretty obvious that some of the Gulf Cooperation Council members, Saudia & the Emirates in particular were shovelling money at Trump as were people like the Mercers (sp?) and Sheldon Adelman.

For Trump, jrk, it's always been about the money -- his and other people's