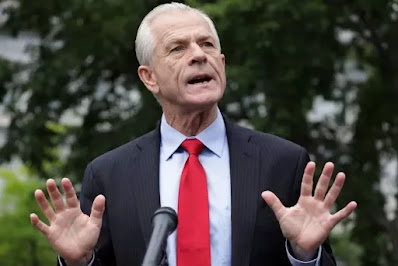 Donald Trump isn't the only one promoting the Big Lie. Trump's former economics advisor Peter Navarro is trying to sell it too. Newsweek reports that:

Navarro, one of the first Trump administration staffers to publicly support the former president's baseless voter fraud claims, continued to insist that the 2020 election was stolen from his former boss in an interview on Steve Bannon's War Room podcast.

"I wrote the Navarro reports, I call them that because The Hatch Act, it's done on my own time, showed very clearly as you had said that not only did Trump win, he won in a freakin landslide," he said.

Navarro repeated the claim twice when requested by Bannon. "In a freaking landslide, full stop," he said. "Trump not only won, he won in a freakin landslide."

Others from the Trump Clown Car have joined Navarro for the ride:

There continues to be no evidence to support their claims:

After the election, the Department of Homeland Security's Cybersecurity and Infrastructure Security Agency said there was "no evidence that any voting system deleted or lost votes, changed votes, or was in any way compromised."

In December, former U.S. Attorney General William Barr, widely viewed as one of Trump's most loyal Cabinet officials, also said there was "no evidence" to support widespread voter fraud claims.

All this offers further confirmation that owning a doctorate from Harvard does not inoculate you from insanity.

Navarro is as mad as a hatter. His intemperate outbursts during his four year stretch with Trump evidence his irrationality. I doubt Stanford will be putting out the red carpet for his return although I expect he's already transferred to the more lucrative career of a pundit.

I suspect that Navarro will find it difficult to find employment at the elite institutions, Mound -- although you never know.

The only thing a Harvard diploma proves is that your parents have lots of money and that money will get you a better job that you often deserve.

From Cotton Mather on down, Navarro is just one of a long line of Harvard grads to have poisoned American society. After Harvard gave Jeffrey Epstein the keys to the college, even after his conviction in Florida, I'm amazed students still apply to go there. As far as I can tell, Harvard's chief product is entitled aholes, like Navarro, Dubya and Kushner, who are wrong about everything. That might explain its continued prominence.

On economics, at first I'd thought there was more liar in him than idiot. Over time, as his commentary expanded beyond his purported area of expertise, I began to wonder whether the idiot may have overtaken the liar. Now I'm sure it has.

And that job can lead to self-aggrandizement but not the greater good, TB.

A number of recent Harvard grads prove that an Ivy League education is not a recommendation, Cap.

Navarro is a striking example of Mark Twain's admonition that it's better to keep your mouth shut and have people think you're stupid rather than open it a remove all doubt. John.

In a way Trump really has talent. It cannot be easy as assemble such a team of total incompetents even given the resources of the US presidency. I mean, look at the inspired appointments of Pompeo and Devos or personal lawyers such as Cohen and Giuliani---brilliant incompetence in action.

It's true that he's a very good con man, jrk. But saying so is no compliment.

Actually Owen I don't think he is even that good of a con man. His reputation before he became president was so bad in the financial community was so bad that only Deutsche Bank would deal with him and it's famous as a laundromat.

I take your point, jrk. But it does take some talent to continually fail upwards.