Our Next Governor General 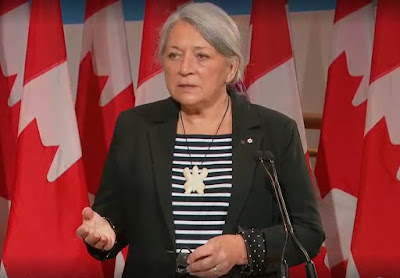 Mary Simon will be our next Governor-General. She has been considered for the job ever since David Johnston got the job in 2010. It's been a long wait. But, Susan Delacourt writes, Justin Trudeau has got it right:

Sometimes a government appointment makes so much sense, one wonders why it hasn’t happened already? In Simon’s case, it actually almost did — twice.

As her husband, former CBC journalist Whit Fraser tells the story in his book True North Rising, Simon learned from the TV news in 2010 that her name was in the mix to replace Michaëlle Jean in the viceregal post.

When Johnston’s term was up in 2016, Simon’s name started to circulate again; this time, closer to the top of the field of contenders. Surely Justin Trudeau would seize the moment to install Canada’s first Indigenous person in the job, given all the new prime minister had said about his “most important” relationship with Indigenous people.

But Simon was passed over again, in favour of former astronaut Julie Payette — and we know how that all turned out.

This time, her appointment has been greeted by praise all around:

Praise has come from Conservative Leader Erin O’Toole and NDP Leader Jagmeet Singh. The Bloc Québécois didn’t have much good to say, but that was more about the institution of the Crown than Simon herself. Even Jody Wilson-Raybould, the former justice minister who is normally critical of everything the Trudeau government does in the realm of Indigenous issues, had praise.

She has precisely the temperament and the experience for the job:

As someone who has served as an ambassador, a cultural leader, a journalist and a constitutional negotiator, she has amassed all the skills a governor general needs for a job heavy on ceremony, diplomacy, communication and symbolism.

Simon’s familiarity with the Constitution is not a small thing. The governor general can be called upon to be a referee in times of intense political stress, as Jean was during the so-called “coalition crisis” between Stephen Harper and the opposition in late 2008.

Four Indigenous groups were involved in the Charlottetown accord negotiations. Simon was head of the Inuit delegation. The accord was ultimately defeated in an early brush with populism in this country — a wholesale rejection in a 1992 national referendum of deals made by political elites.

It's taken a while. But she's the right person for the job.

Simon may be the right person for the job, but as an appointee she'll never have the democratic legitimacy to act as a much-needed constraint on the PM's power. The GG job itself needs to be reformed from the ground up if the position is to function as designed.

First, GGs should be elected by voters, not selected by the PM and thus indebted to him. The position of GG is far from just ceremonial, as Harper forcing Jean into a constitutional crisis showed. An incompetent GG can do real damage, as Jean did when she allowed the PM to prorogue parliament to dodge a confidence vote. Not only did this damage Canada's parliamentary order, it provided a precedent for BoJo to do the same in the UK. An elected GG would have the democratic legitimacy to stand against a rogue PM.

Second, the GG's office shouldn't be exempt from the access to information laws that apply to the rest of government. This exemption is part of the reason why it took so long to find out about Payette's outrageous conduct. Canadians have a right to know what their government is up to and that includes the GG's office.

Finally, thought should be given to cutting the foreign monarchy out of the loop entirely. An elected, accountable GG would go a long way to making it easy to cut the apron- strings to Lesser Brexitannia once and for all.

If the GG was elected, Cap, we'd have to cut all ties to the monarchy.

An elected GG would become a popularity contest. And, it certainly would not guarantee competence.

So, what Canadians really need then, is politicians who consider what is best for all Canadians, who have an above intelligence and demonstrate at least an average amount of honesty.

Hope rings eternal (or some such nonsense). Ya know what I mean!! Perhaps we all need to ask aspiring political candidates some real, relevant, skill-testing questions and record their answers - before they get elected!

Our parliamentary system is biased upon the Magna Carter. That is why the present Queen is head of our Country. She is enthroned to make sure the democratic rules of what we Canadians come from is adhered. She however does not have a public opinion on present leaders in Canada. In other words she is non partisan. It would be a travesty if we were to oust our system and replace it with what they have south of the border. Republics have a heck of a time trying to hang on to their democracy. Republics are open to any monied person to institute their form of Dictatorship as we have watch lately. Contrary to belief, Canadians do NOT send money to Britain for Royal Family. Anyong

My sense, Anyong, is that Canadians don't want to cut ties to the Crown.

I'm thrilled about the appointment! Its about time. Now as to some who are upset about her lack of French, quite frankly I don't care. She speaks an Indigenous language which was in this country centuries before the French even got here. IT would be amazing to have the Throne Speech done in an Indigenous language for a change, O.K. for the first time. For those who don't like the idea get over it. The Indigenous People were on this land for thousands of years before some Europeans showed up. Not only is the new GG very qualified I consider this a celebration of the Indigenous people in this country.

I suspect the vast majority of Canadians will agree with you, e.a.f.

In my view the role needs to be enhanced..
with zero connection to The Queen

There's a scene in Game of Thrones
The Hound has a young girl he's decided to protect
and they enter a tavern ..

His outlook re 'The King' is priceless
as is Johnny Rotten's succinct irony ..
re 'God Save The Queen'

My sense is that Canadians don't go weak-kneed about the Queen anymore, sal. But I don't think they want to ditch her either.