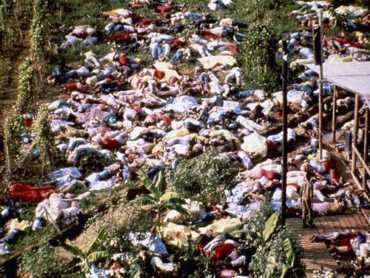 One of the underlying characteristics of a cult is insane loyalty. That kind of loyalty is on full display in the modern Republican Party. Paul Krugman writes:

Signaling is a concept originally drawn from economics; it says that people sometimes engage in costly, seemingly pointless behavior as a way to prove that they have attributes others value. For example, new hires at investment banks may work insanely long hours, not because the extra hours are actually productive, but to demonstrate their commitment to feeding the money machine.

In the context of dictatorial regimes, signaling typically involves making absurd claims on behalf of the Leader and his agenda, often including “nauseating displays of loyalty.” If the claims are obvious nonsense and destructive in their effects, if making those claims humiliates the person who makes them, these are features, not bugs. I mean, how does the Leader know if you’re truly loyal unless you’re willing to demonstrate your loyalty by inflicting harm both on others and on your own reputation?

That nauseating loyalty is behind Republicans rejection of COVID vaccinations:

How did lifesaving vaccines become politicized? As Bloomberg’s Jonathan Bernstein suggests, today’s Republicans are always looking for ways to show that they’re more committed to the cause than their colleagues are — and given how far down the rabbit hole the party has already gone, the only way to do that is “nonsense and nihilism,” advocating crazy and destructive policies, like opposing vaccines.

That is, hostility to vaccines has become a form of loyalty signaling.

The G.O.P. has become something different, with, as far as I know, no precedent in American history although with many precedents abroad. Republicans have created for themselves a political realm in which costly demonstrations of loyalty transcend considerations of good policy or even basic logic. And all of us may pay the price.

Like the residents of Jonestown, Republicans have drunk the Kool-Aide. They're prepared to die for their leader.

Monday saw a big stock sell-off linked to delta variant fears. Yesterday, Fox sent out the bat signal, with Hannity admitting that he and his family were vaccinated and urging viewers to do the same. Ben Shapiro tweeted that he and his family were also vaxxed then went on a rant about masks. Even Tucker Carlson backed off a bit from his usual anti-vax conspiracy theories.

The worm seems to be turning, but we'll see how long it lasts. Fox's lawyers may have told them to throw out some warnings to mitigate legal risk before going back to the usual flood of disinformation.

As usual, Cap, money talks. And the surest sign of fear is a big financial hit.

Perhaps it's all baked into the DNA of this white supremist society?

On February 20, 1939, a Nazi rally took place at Madison Square Garden, organized by the German American Bund. More than 20,000 people attended, and Fritz Julius Kuhn was a featured speaker. The Bund billed the event, which took place two days before George Washington's Birthday, as a pro-"Americanism" rally; the stage at the event featured a huge Washington portrait with swastikas on each side.[1] Wikipedia

Washington's portrait -- with the swastikas -- is a superb illustration of the utter illogic behind a cult, PoV.

The G.O.P. has become something different, with, as far as I know, no precedent in American history
Eh? I thought this was as American as apple pie.

Joseph Smith and the Mormons? L. Ron Hubbard and Scientology? Whoever those nutcases were started the Massachusetts Colony and the wholesale persecution of wild turkeys. Louis Farrakhan and the Nation of Islam. Jim Jones? That Ruby Ridge character? Possibly the Jehovah's Witnesses or the the Seventh Day Adventists? Maybe the KKK?

If we push things a bit, maybe senator Joe McCarthy in his heyday?

Trump is just another one in a long line. Well, maybe a bit more successful.

The United States has a rich history of cults and their leaders, jrk. What makes Trump different is that he made it all the way to Washington.

1:18 pm As I was reading the blog, what you commented was also top of my thinking as reading. Some people will die to prove their loyalty whether right or wrong. On of the comments I hear regarding COVID is “herd immunity”….it bothers me. Anyong