The Signs Are Not Good 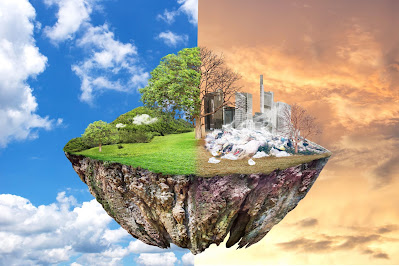 This summer has confirmed the reality of climate change. Eugene Robinson writes:

Climate change is slow, gradual, almost imperceptible — until suddenly it’s not. One day, it seems like a normal summer. The next, the temperature soars to an unbearable 121 degrees. In Canada.

In a region where many homes are not air-conditioned, it is not yet clear how many people died from the extreme heat; in British Columbia alone, officials said there were more than 700 “sudden and unexplained” deaths during the week, three times the normal average. At least 95 deaths in Oregon are suspected of being heat-related. Dozens of deaths are being investigated in Washington state as well.

We were warned that this was going to happen.

The planet is warming because human activity has raised the concentration of carbon dioxide in the atmosphere by more than 47 percent since the dawn of the Industrial Revolution. Atmospheric carbon is now at a level not seen since 3 million years ago, an epoch when average sea level was 50 to 80 feet higher than today, according to the National Oceanic and Atmospheric Administration.

We desperately need to slash carbon emissions and stop making things worse. But we also need to reckon with the myriad implications of the damage we have already done.

That means reexamining all kinds of assumptions — however reasonable they once were — that went into the way human infrastructure has been designed and built. What seemed like normal environmental parameters may no longer apply.

And we must act now:

It means that beachfront structures in vulnerable areas should be inspected, and their safety reevaluated, in light of the impact of rising seas. It means that projects to stem worsening flooding, such as a massive 20-foot sea wall that the Army Corps of Engineers proposes for Miami, should be given new urgency. It means that the price tag for such undertakings, however daunting it may seem, must be weighed against the cost in human life of doing nothing.

It means understanding that “100-year floods” or “500-year hurricanes” will no longer confine themselves to the intervals we have assigned them. Periods that once were considered extremely wet or dry will no longer be seen as extreme; the weather bell curve has widened and the temperature bell curve is shifting measurably to the warm side.

It means being smart enough to use the spending that will be necessary to adapt to climate change as an engine of economic growth and transformation. It means seeing adaptation not just as an environmental program but as a jobs program as well.

Are we smart enough to do what is required? When so many of us are still refusing to get vaccinated against COVID, the signs are not good.

Email ThisBlogThis!Share to TwitterShare to FacebookShare to Pinterest
Labels: Climate Change And The Future

What this all means and points to is that first and foremost, we must look seriously at the exponential growth in the world's population. That problem will not be solved by just moving people from one continent to another while carrying on the current rate of overall births. The other component is that we need to elect smarter and wiser politicians in every country that prides itself on being a "democracy" - and I sure don't see that happening any time soon.

We have become, as a species, a world of opportunists, and I don't see that changing any time soon, at least not in my lifetime.

As long as we see our first responsibility as primarily looking after our own needs, Lulymay, we will continue down this dead-end road.

We have had so many past warnings, Owen, and now that there is incontrovertible proof of the dire nature of climate change so close to home, it would be nice if we would now heed those warnings. However, it seems we have an almost unlimited capacity to compartmentalize and ignore things. Even the upheaval of our lives due to these events seems to make only a limited impression. It is almost as if we have a collective death wish.

We're paralyzed, Lorne. It's precisely now that we need courage. And it's nowhere to be found.

Like your question at the end, are we smart enough......

No the world is not smart enough. No one thinks they are responsible so they do nothing. Do you think China or India are going to modify their behaviour? Not so much. One of the real problems is the ever growing population in the world.

I always find it interesting that poverty and the need for people to survive sometimes isn't good for the enviornment and then the wealthy get in there and with their over consumption, flying, use of natural resource account for the other problem.

The very rich aren't interested in changing their life styles and when you look at the world, we in Canada form part of the 1%. How much food do we throw away. We tear down perfectly good homes to build bigger, build with more things we don't need. The endless buying.

When you go into houses built in the 1950s and prior they had very small bedroom closets, these days, bedroom closets are the size of a room. Just the clothes we keep buying are causing an environmental disaster.

The current cost of gas in B.C. might cause some people to reduce their driving, but it is doubtful.

Until a major city burns due to forest fires getting into the urban forest, not much is going to happen.

It means understanding that “100-year floods” or “500-year hurricanes” will no longer confine themselves to the intervals we have assigned them.

This seems to be a typical misunderstanding of simple probability theory. Assuming that floods are independent results[1] there is no reason why we cannot have all three “100-year floods” in three years.

Of course climate change has changed everything so the old "seat-of-the-pants"/historical estimates from way back who knows when are now useless. Major re-insuring companies such as Munich Re seem to have realised this a decade or two ago.

1. Not likely but that seems to have been the assumption.

A good portion of Fort MacMurray burned a few years ago, e.a.f. Not much has changed.

That seems to be a justifiable conclusion, jrk. Not likely.

@ e.a.f
Do you think China or India are going to modify their behaviour?

Well for India the Modi Gov't makes the Trump regime look rational so who knows but China yes. Beijing is actively discouraging coal generating plants, albeit with mixed results. It is the world's largest producer of solar panels; they are not all for export. And so on.


China's gov't tends to be composed of very highly competent managerial types with good educations and lots of experience. They certainly understand the issues surrounding climate change and have been taking action. Besides, all you have to do is be in Beijing on a "bad air" day and you know you have a bit of a problem.

Given the population, geography, and political considerations, whether they can do enough is the worry.