A Political Response To Vaccines 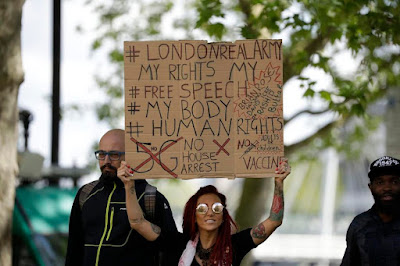 It's sad but also true that, in the United States, getting or not getting vaccinated has become a political statement. Paul Krugman writes:

As Aaron Carroll pointed out Tuesday in The Times, Covid is now a crisis for the unvaccinated. Risks for vaccinated Americans aren’t zero, but they’re vastly lower than for those who haven’t gotten a vaccine.

What Carroll didn’t say, but is also true, is that Covid is now a crisis largely for red states. And it’s important to make that point both to understand where we are and as a reminder of the political roots of America’s pandemic failures.

I’m not saying that only Republicans are failing to get vaccinated. It’s true that there are stark differences in attitudes toward the vaccines, with one poll showing 47 percent of Republicans saying they are unlikely to get a shot, compared with only 6 percent of Democrats. It’s also true that if we compare U.S. counties, there’s a strong negative correlation between Donald Trump’s share of the 2020 vote and the current vaccination rate.

It's clear that public health disasters happen where Trumpists are in charge:

There are regions in America where large numbers of people have refused vaccination. Those regions appear to be approaching the point we feared in the early stages of the pandemic, with hospitalizations overwhelming the health care system. And the divide between places that are in crisis and those that aren’t is starkly political. New York has five Covid patients hospitalized per 100,000 people; Florida, where Gov. Ron DeSantis barred businesses from requiring that their patrons show proof of vaccination, has 34.

When getting a vaccination becomes a political statement, the real virus is insanity.

Were it not for the dangers of transmission and mutation of the virus, Owen, I would be fine with nature taking its course with these people.

It's shameful that the most irresponsible and irrational politicians are not in Florida, Missouri or Mississippi, but right here in Alberta and Saskatchewan. As bad as DeSantis is, Florida and the other states still mandate that people with Covid and those they've come in contact with self-isolate. Public health departments still track and trace Covid cases. In other words, the basics of public health are running in the background even if masking and inoculation are a mess.

Not so in AB and SK. Kenny and Moe are doing away with quarantine, isolation and tracking and tracing. No more Covid testing outside of hospital admissions. Those provinces will be in the dark when it comes to community spread. This is literally the widely ridiculed Trump strategy being put into action - if we don't test, we won't have new cases.

It's no wonder Britain still requires vaccinated Canadians, but not Americans, to quarantine on arrival. Ontario should close the border to AB and SK plates, just like we did with QC. I don't understand how demonstrating that you don't care about the public's health could ever be seen as a winning political strategy.

One way or another, Lorne, I suspect that's what will happen.

Nor do I, Cap. But, then, these days I confess there's so much I don't understand.

British Columbia has a natural defensive wall, the mountains. Block off the passes.

Everything today that can be politicized is. That's the malignancy of hyper-partisanship.

When everything in life becomes political, Mound, common sense goes out the window.