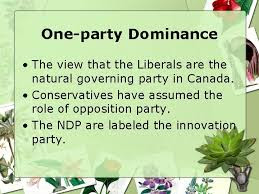 Lawrence Martin writes that the Liberals have been Canada's natural governing party for a long time. Consider the history:

They have emerged victorious in 25 elections, the Conservatives 18.

The party won four in a row under Wilfrid Laurier, five back-to-back under Mackenzie King and Louis St. Laurent, five in a row also under Lester Pearson and Pierre Trudeau, and four again with Jean Chrétien and Paul Martin. The Conservatives won four in a row once, a century and a half ago under John A. Macdonald.

Many on the right gripe that the media are biased toward the Liberals. They might consider that their real problem is that the Canadian people are biased.

Today’s Conservatives tilt against the zeitgeist. Since the demise of the old Progressive Conservatives, they are a party anchored further on the right, entrenched on the Prairies but nowhere else. They’ve become a lost cause in Quebec, where voters are more inclined to social-democratic formations. Brian Mulroney’s old Tories won two straight majorities primarily on account of Quebec.

When they do win, it's because Canadians have tired of Liberal dominance:

John Diefenbaker’s messianic triumphs in 1957 and 1958 followed 22 consecutive years of Liberal rule. Mr. Mulroney’s huge win in 1984 followed a two-decade Liberal incumbency save for Joe Clark’s brief appearance. Stephen Harper’s win in 2006 came after 13 years of Liberals at the helm.

Strokes of good fortune are also key, such as Lester Pearson’s disastrous decision to force an election in 1958 or John Turner’s brutally incompetent campaign in 1984.

Likewise, Stephen Harper’s coming to power benefited from a run of lucky breaks – Paul Martin not calling an election right away when he had an enormous lead upon succeeding Mr. Chrétien; the sponsorship scandal and the Liberals’ boneheaded decision to call an inquiry into it. The RCMP’s ham-fisted, momentum-shifting decision during the 2006 campaign to announce a criminal probe into alleged Liberal insider trading. Once in power, the Conservatives then had the fortune of facing weakling Liberal leaders in Stéphane Dion and Michael Ignatieff. Mr. Harper was battered by Mr. Trudeau in 2015. A recent poll in Maclean’s showed that if Mr. Harper were running this time, he would be battered by Mr. Trudeau again.

So will history repeat itself again in favour of the Liberals? We'll see.

Thanks again for posting from the G&M. I read your snippet and again realized I could have predicted the contents. No wonder the 'newspapers' are circling the drain.

The best part of your post was not taken from the Globe piece, I am betting. "The party of innovation" has a nice ring to it.

Why rush to call an election? The opposition parties have uninspiring leaders and the Libs are riding high in the polls. Trudeau should be able to get what he wants just by threatening an election, just like Harper did with Dion and Iggy. When the government mandate runs out, the opposition will have the same uninspiring leaders and they can be clobbered then. In the meantime, Trudeau has the opportunity to show up O'Toole and Singh as ineffective. I'm really not seeing any reason to rush, especially with the good chance of a significant Covid flare-up during the campaign.

I have no idea how this election will turn out, PoV. But I did find the history interesting.

COVID is still the wild card, Cap. It keeps evolving. It's far from being contained.

If people vote the Conservatives into office they will live to regret it or perhaps die because of it. OToole will be no better than Harper. Its not just the leader with the /Conservatives, its the actual M.P.s In my opinion some of them are a tad backward, sort of like Jason in Alberta.

Almost every one negatively effected by COVID when it hit, received some sort of help from the federal Liberals. That help kept food on table, the lights on, businesses in business or able to re open, etc. Trudeau had 500,000 cheques out in 36 hours. It helped a lot of Canadians. As people in my neighbourhood stopped going to work not much changed. People were able to live their lives without too much disruption. Once the worst of it was over, many small businesses were able to re open because of the loans they received from the feds. We all know how Harper feels about the money given and/or loaned to Canadians. COVID isn't over and we may need these programs again. With a Conservative government in office, people can expect to line up at their provincial welfare offices where they won't be getting much because they all own cars and houses, et.c

Just for the record, I've never voted Liberal nor am I a member of any political party.
'

But it's my guess, e.a.f, that you would never -- ever -- be a member of the Conservative Party.