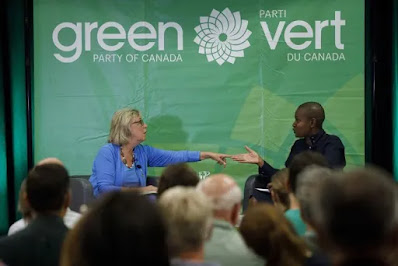 The Green Party is consuming itself. Recent developments are not encouraging. Susan Delacourt writes:

Green Party Leader Annamie Paul is facing a vote of confidence in two weeks, on July 20.

The party is not holding its big, biennial convention until the end of August. If Paul does not pass the confidence vote, that convention will be all about how to get some kind of leadership in place for a looming federal campaign. That is, if the campaign hasn’t started already.

Several party staffers were informed Wednesday that they had been laid off, including two in Paul’s office, and it was revealed that the Greens will not hire a national campaign chair for the next election. This at a time when other parties ordinarily would be adding to their election-readiness team.

The turn of the wheel has been dramatic:

Two years ago, as another, previous federal election loomed, the Greens looked like they were on the verge of a breakthrough. Provincially, Greens were getting elected to legislatures in Ontario and the Atlantic Provinces where they had never been considered serious contenders before. Greens were thriving in British Columbia, helping NDP Premier John Horgan stay in power.

Pundits such as this writer were speculating (always dangerous) about a Green party caucus in the double digits in Ottawa; possibly official party status in the Commons.

Instead, Greens only managed to gain three seats in the Commons in October 2019 — now reduced to two after Fredericton MP Jenica Atwin’s defection to the Liberals last month. The Green party leader blamed this on a plot by Justin Trudeau to destabilize her party, but it’s looking like the Greens are more than capable of pulling that off all by themselves.

With another federal election looming, this not the time for this to happen.

Email ThisBlogThis!Share to TwitterShare to FacebookShare to Pinterest
Labels: The Future Of The Green Party

Sad to say Owen, but the Greens have just put themselves back 10 years, perhaps into total oblivion federally which given the state of our environment and their general platform is very troubling. No matter who is to blame be it a vocal part of the executive or the new leader they have shot themselves in the foot and are about to fall down the well! Suspect it is a big bonus for the Liberals though

Paul's decision to deny shadow positions to her only elected members will only alienate more party faithful.Get rid of the people you have and refuse to attract new members is a strange strategy.

The Greens are in a precarious position. Originally growth came from disillusioned NDPers and soft Tories. With an incoherent economic policy and an unoriginal environmental policy it appears that all it has going for it, as a Party is to be the home of lookie-loos and people driven from other places.

Coupled with a Party Leader that few have heard of and with no prospect of getting a seat. what do the people looking for alternatives see in that?

Just my two cents worth!

Unfortunately, Ms. Paul has shown that she does not have the necessary gifts of leadership - especially when, with the Green Party, you are basically heading cats.

This has been self-inflicted, Rural. It's deeply troubling. In fact, it's tragic.

That's not how to grow a party, rumley. It's political malpractice.

Disgruntled voters used to have an alternative with the Greens, Ben. Now they're just more disgruntled.

It's pretty clear, UU, that Ms. Paul was never the person for the job.

In previous elections the Green Party was a box on the ballot where those of us who were frustrated with inaction by the establishment could send a message that the environment is important. Voicing hard positions on other issues, such as Israel versus Palestinians, simply diminishes the attraction to Green. By venturing into identity and woke issues the party signals that the environment is no longer a priority and that drives its voter base away. In the next polling booth the only box that points to a solution to Climate Change might be a religious party that says God will fix it.

Under First Past The Post, Toby, our options are shrinking.


Ms. Paul knew the party membership was strongly pro-Palestine when she ran for leader. Even Elizabeth May, despite throwing a tantrum and threatening to quit, was not able to cow the membership.

Now the party is a giant lame duck. Its leader is unelectable. She has three arrows in her quiver and uses them freely and indiscriminately to silence her critics by branding them misogynists, racists and/or anti-Semites.

I stayed with the Greens as they held on by their fingertips. I thought that the climate emergency would eventually draw the public to their party. That illusion has been shattered. The Canadian public want action on climate change - provided it doesn't demand anything of them. We've got a prime minister who invents the notion of Canadian leadership on climate change even as our emissions have kept increasing.

We are a petro-state, one of the worst. Canada will pay a price for that but, hey, that's 10, maybe 15 years down the road. Don't worry, be happy.

Elizabeth May worked crazy hard to build that party but she didn't succeed. Why anyone expected Annamie Paul to do better eludes me. She's an anchor round the party's neck and just treading water is becoming too much to endure.

If we do go to the polls this autumn, I'll have just one choice - to spoil my ballot.

We're at a tipping point, Mound. And we still refuse to recognize the precariousness of our situation.

I don't like spoiling my ballot. It just gets counted with the ones spoiled by frustrated comedians. We should revisit the question federally of allowing voters the option to formally decline the ballot as we do in Ontario elections. But I guess there are more important matters that we're already neglecting.

It's getting more frustrating for those of us who don't like anything that's on offer, John.

As I said before, Trudeau could offer an electoral reform package of allowing "none of the above" on the ballot starting with this coming election. Then there would be no spoiling of votes and no "strategic" voting, something I never clearly understood and some of us could truly be counted. Colour me "unimpressed".

That would be simple and direct, zoombats. But it probably won't happen.

If "none of the above" should win, it becomes another story. I don't think it's happened in jurisdictions where the option has been offered, but it would interesting to see how they'd handle the situation here if it did.

"When 'None of the Above' is listed on a ballot, there is the possibility of NOTA receiving a majority or plurality of the vote, and so 'winning' the election. In such a case, a variety of formal procedures may be invoked, including having the office remain vacant, having the office filled by appointment, re-opening nominations or holding another election (in a body operating under parliamentary procedure), or it may have no effect, as in India and the US state of Nevada, where the next highest total wins regardless. ...

"No electoral jurisdiction in Canada formally lists 'none of the above' as a ballot option. However, in some provincial elections it is effectively possible to vote for 'none of the above', by attending the polling station and formally 'declining to vote'. These declined votes are counted and become part of the electoral record. ...

"In Ontario, the None of the Above Party of Ontario is a registered political party, although its stated mandate is for its candidates to serve in the legislature as independent representatives who reflect the views and interests of their constituents, rather than simply as a 'reject all of the candidates' placeholder."

This question is an old time-waster that came up intermittently in discussions with my canvassing buddies as we sought to rationalize our personal delusions of importance to the process.

A majority of NOTA votes is certainly within the realm of possibility, John. Then, like Robert Redford in "The Candidate," we'd have to ask the question, "What do we do now?"

The other political parties couldn't have done a better job of destroying the Green Party. They did it to themselves. They weren't even smart enough to keep this "in house", and at least get through the next federal election. The Greens are cutting off their nose to spite their faces. Not the brightest bunch in Canada. If this is a power play within the party, one does wonder what the end game is or do they hate the current leader so much they would destroy the Greens to unseat her from her duly elected position.

In the end, e.a.f, all of this is self-defeating.