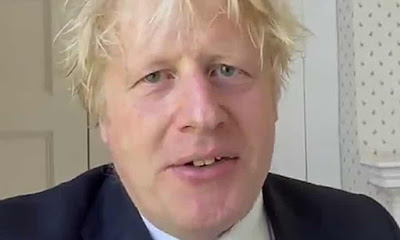 The prime minister’s glory day was such a disappointment. He had planned an event to declare his own VE Day – virus victory – “by summoning the spirit of Churchill with appropriately stirring rhetoric” at “an historic venue associated with the wartime leader”, according to a government source. In a rare wise move, Downing Street quietly cancelled it.

His advisers panicked over soaring Covid case numbers, predicted to rise to 100,000 or even 200,000 daily, the third-worst level in the world. What political idiocy, that the PM and chancellor thought they could skive off self-isolation on a nonexistent VIP “pilot scheme” – the same one Michael Gove had invoked to avoid quarantine after taking his son to the Champions League final in Portugal. Far too late, Downing Street announced that No 10 and the Cabinet Office had pulled out of this “pilot”, refusing to publish its results.

BoJo is Britain's Donald Trump. He screws up everything he touches:

Now get set to watch the public frustration and friction over swaggering macho men and defiant anti-vaxxers refusing masks, putting other passengers and shoppers at risk. Churchillian Johnson might have said, “Never in the field of human viruses was so much infection due to such an irresponsible few.” Polls this week have again shown that the public understands the precautionary principle better than their leader does.

“The warning light on the NHS dashboard is not flashing amber, it’s flashing red,” the health committee chair Jeremy Hunt told the Today programme on Saturday. There’s no better alarm signal than the double-jabbed new health secretary immediately contracting Covid, with unknowable long Covid effects, risking its spread through a care home he visited and pinging half the cabinet after close contact with them. That’s the story: the virus is everywhere, disease-inducing and still deadly to VIPs and little people alike.

“Please, please, please be careful,” Boris Johnson urged in full U-turn, but that’s not what his lot practise. His “irreversible” pledge has vanished because, right here and now, disaster has already struck an exhausted NHS all over again.

We are cursed with leaders who simply don't know what they're doing.

Email ThisBlogThis!Share to TwitterShare to FacebookShare to Pinterest
Labels: Freedom Day In Britain

Britain should serve as a cautionary tale to all of us, Owen. At least in Ontario we have been re-opening with real care and deliberation. A pity our British cousins seem instead to be embracing that 'stiff upper lip' pose while disease and death rage.

COVID is a cautionary tale everywhere, Lorne. Some of us have displayed more caution than others.

Closer to home, our very own Jason Kenney was strutting his stuff sans masque at the Calgary Stampede "now that the pandemic is over." Anything to please our billionaire owners who have fallen behind Branson and Bezos in the space race. Reminds me of an old ditty from Gil Scott-Heron:

Was all that money I made las' year
(for Whitey on the moon?)
How come there ain't no money here?
(Hm! Whitey's on the moon)

Folks like BoJo and Kenney are living on a different planet, Cap.

It seems like the world has another pandemic, Owen, and it is the continuous ability of so-called democratic countries, populated by folks who have all sorts of access to a good public education system, yet seem bound and determined to elect a government of "ineptocrats".

I've come to the conclusion that since the end of WWII, we have become (as nations) a population of "me, me, me" rather than "us, us, us". I think its time for a re-boot!

I agree, Lulymay. And I really like that word "ineptocrats."

Is it possible these people graduated with a C-? Maybe daddy’s money put them were they are? A person can have all the “upper lip” they want, it sill doesn’t make them smart. Anyong

A degree from an elite school has never been a sign of brilliance, Anyong.

Perhaps a bit of constitutional house cleaning is called for. How about making all government policy making subject to a "do no harm" rule. When challenged the Precautionary Principle shall apply.

Imagine what it would be like if government was restrained from blatantly perilous activity such as pouring tens of billions into pipelines when the world is in the throes of a climate catastrophe.

How would rightwing anti-vax measures fare in the U.S. under such a test?

Good question, Mound. Unfortunately, what is reasonable is unreasonable these days.