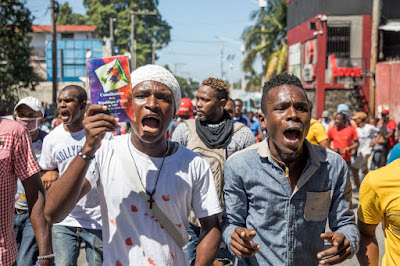 Forty-two years ago, my wife and I caught a flight from Montreal to Port au Prince. We went there not as tourists but as observers. Jean Claude Duvalier -- "Baby Doc' -- was President for Life. He was preceded by his father Francois Duvalier -- "Papa Doc."

When we left our hotel in the morning, children gathered around us, hands outstretched, begging for money. We travelled around the city in minibuses -- they called them "tap-taps." Once, when stuck in a traffic jam, a legless man was wheeled out beside the bus, with his hands outstretched -- like the children.

On a hot evening, after a tropical cloudburst, a puddle formed in the streets. It looked like a prairie slough. A woman bathed there, as human feces slid from the shanties on the hill into the pool.

Outside the city, the landscape was deforested.  A few struggling stalks of corn grew in the open spaces.

That was over forty years ago. Nothing has changed.

That guy (Moise?) who as murdered, wasn't the president of Haiti. He said he was, but he wasn't. He was an illegitmate, corrupt dictator.

This Jacobin interview speculates that the rest of the Haitian ruling class had him killed because his extreme behaviour was stirring up the poor majority. They probably hope for a US-led OAS occupation to nip that in the bud.

This is an old story in Haiti, Thwap. And it keeps repeating itself.

I believe the Jacobin article Thwap references is right.

Two Haitian-Americans arrested. They say their only role was as translators. The rest are Colombian. Haitians are French/Creole-speaking. Colombians, Spanish-speaking. That could have required translation. Fair enough.

Then, in the wake of the assassination, Haitian officials wasted no time in requesting that Biden send troops to restore order. Bingo. Didn't work, at least not yet. Biden said no to a military force but sent envoys from the State department (CIA) and the FBI.

Does anything ever work out for the Haitian people? The slave revolt threw off the French planters and their governor but freedom didn't bring much peace and prosperity to the masses.

Many years ago National Geographic posted a satellite image of Hispaniola that showed the heavily forested jungles of the Dominican Republic and the barren, deforested hills of Haiti. In the DR, soldiers with assault rifles patrol the beaches looking for Haitian illegals who have crossed over in search of work.

I expect Biden knows he has enough on his plate, including a couple of real emergencies, without taking on Haiti's woes.

Something tells me Biden is well aware of Haiti's history, Mound. He'll steer clear of this part of Hispanola.

According to my Libertarian Primer for Disturbed Teenagers, it's nothing that the right economic hit man couldn't have fixed two hundred years ago when traditional cost-saving measures associated with labour arbitrage in relation to transnational commerce were undergoing re-evaluation. That's their storyline.

It's a storyline that never changes, John.

After the earthquake with all the money which went into Haiti I thought things might get better for the people. I was wrong.

I believe it was quite smart of Biden to not send troops. Sending cops, was a much better idea. Perhaps its time for a group of women to take over the government. Men haven't done much for the country.

Sounds like a good suggestion, e.a.f. But the corruption is so deeply ingrained you have to wonder if anyone can fix the country.