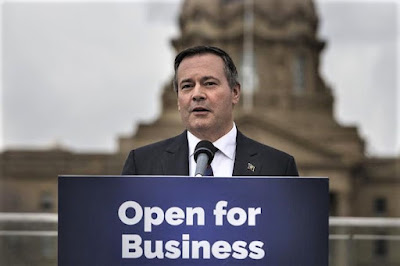 With Delta-dominated post-Calgary-Stampede COVID-19 rates surging and more than 1.5 million Albertans including all children under 12 still unvaccinated, Dr. Hinshaw announced that in less than three weeks Albertans who test positive for COVID-19 will no longer be required to go into isolation, or seemingly do anything else.

At that point, Alberta will probably be the only jurisdiction in the world where such a state of affairs exists, at least officially. So if COVID-infected Albertans want to go to a bar, hang out in restaurants, sing in church, or attend musical concerts, there’s nothing to stop them. They can fill their boots!

Starting today, anyone who is known to have come in contact with anyone infected with COVID-19 will no longer be notified, although Dr. Hinshaw said it would sure be nice if the person who did the infecting bothered to let them know.Henceforth, she added, COVID-19 will be handled “like other respiratory viruses.” Influenza, the common cold, whatever. Isolation supports and quarantine hotels will disappear. COVID-19 testing will be dumped on doctors’ offices, which is sure to be unpopular with physicians and their patients. Asymptomatic testing? Forget about it.

All of this flies in the face of tried and true public health policy. And the Kenney government certainly has its critics:

Calgary physician Joe Vipond, a frequent critic of the government’s half-hearted approach to the pandemic who has been proven right more often than government spokespeople throughout the pandemic, responded sharply on Twitter.

“We are launching an experiment on a population level, first in the world to basically stop acting on COVID,” Dr. Vipond tweeted. “This is an effort to hide the #s, and achieve herd immunity, that will profoundly hurt us.”

“I can predict other countries putting Albertans on the no entry list soon,” said University of Alberta law professor Ubaka Ogbogu, another prominent critic of the government who once served on the Health Quality Council of Alberta. He quit in 2020 to protest government health-care policies.

“We have presently the stupidest public health response to the pandemic in the G7,” he stated.

We scratch our heads about what is happening in the southern United States. But we also have our own moronic places.

As the good doctor says, this is just plain stupid.

Email ThisBlogThis!Share to TwitterShare to FacebookShare to Pinterest
Labels: Jason Kenney and COVID

I'm amazed that Dr. Hinshaw takes public health advice from politicians without any training or experience. We saw how that worked out for Ontario's Dr. Williams and the US's Dr. Birx, who left with their professional reputations in tatters. Williams and Birx at least could quietly retire, but that prospect is a long way off for Hinshaw. She should at least be speaking up, like Dr. Fauci did during the Trump regime.

Time to build that firewall around Alberta, Owen.

That is truly the situation here..it certainly has made me want to leave. This is an atrocious action on the part of Kenny. It truly smells oof authoritarianism for which the rest of the country needs to be watching closely. What else can be expected from a person who is a career politician who believes religion ought to be part of the political field. Yes… god will provide. Anyong

Is it any surprise that in what was the conservative heartland the Tories are losing in polls to the NDP? The Premier had to work hard to achieve that.

I'm also surprised by Dr. Hinshaw's reaction, Cap. Does Kenney demand the same kind of loyalty Trump demanded? Why would any thinking person be loyal to men who are so obviously ignorant?

My brother lives in Calgary, Lorne. He tells me that, when it comes to vaccines, you have the same urban/rural divide in Alberta that you have in the United States.

You have first-hand experience of this, Anyong. Things must be difficult.

You really do have to work hard, Gyor, to be that dumb.

That settles it. Jason Kenney is insane. He knows the virus is a real thing. But he chooses to compartmentalize that knowledge in order to posture as a freedom-loving ally of all the COVID-denying morons. Too bad for him that those nutbars are crazier than he is and have already pronounced him to be a Bilderberg/Globalist traitor.

He could only win the UCP leadership through fraud. His insane policies are going to have a devastating real-world impact. His support will crater. And he will turn to some pedophile Catholic priest for comfort and counsel.

Asking as always, is Steven Harper pulling Kenney's strings? There's a big political gamble in this. If Kenney pulls this off well there could be a big swing to Conservatives across the country.

Some people are known for making foolish bets, Toby. Kenney strikes me as someone who would go the track and go home broke.

There's a lot of insanity going around these days, thwap. Kenney is yet another example of it.

If you poke around Clemenhaga"s blog you will also see that Kenney is doing his utmost to drive out Alberta's doctors and cripple the rest of the health establishment in the middle of a pandemic.

Unfortunately I think Twap is correct, "Kenney is insane". If he had been Prime Minister in 1939 We would have been allied with Germany.

Kenney is on a mission akin to Maggie Thatcher and Ronnie Reagan.
He and O'Toole relics of a bygone age that still disrupts .

its all about the money. With the province "opening", people will go back, he hopes to their shopping, travelling, etc. and he and his supporters will make money. The economy in alberta is dead on its ass and with COVID restrictions, it got worse. This is Kenny's idea of an economic plan. If people die, they die. He doesn't care.

Now people might start to pay attention when their loved ones start to die, but who knows. What is disgusting, is children have no say in this and those under 12 are unvaccinated and can't be. No one has the right to take their lives away from them, but that is what Kenny is doing.

An article I was recently reading advised that world wide 1.5 million children had lost parents or grandparents they lived with due to covid. That is a lot of children grieving, being orphaned, etc. That is not a good thing for the future of the world or these children. It is interesting Kenny is doing this while he is starting a war with nurses. American corporations will be lined up to hire them and some will move to other parts of Canada. A stat on another blog some months ago advised 42% of Alberta doctors would like to leave the province. It is hoped they come to B.C. Not all of the province is expensive and we do have great skiing and swimming.

Kenny may also be playing to his religious base. They think they go to heaven to see Jesus. Like give it a break. Once you're dead you're dead and having dead children around is a real drag, trust me . A few thousand dead children ought to give Notely a win and send Kenny to the basement of his mommy's house.

Actually it might be fun is some one charged Kenny with child abuse or child endangerment with his new b.s.. As to why the doctor went along with it. Its easy. It was go along with it or be fired. The job she has pays well.

Your last line should make it into a collection of quotable quotes, TB.

Alberta has been in bad shape for quite a while, e.a.f, and it's not getting any better.

Toby is correct: Harper is pulling the strings. O'Toole is going down in flames this fall, and Saint Steve will CONveniently be there for the resurrection.

It was noted by all that both the Premier and Minister of Health were nowhere to be found when the insanely weak Hinshaw shuffled out to float a trial balloon that would condemn all Canadians to Harper's libertarian dystopia.

The ghost of Stephen Harper continues to haunt us, I?.

4:15 pm Question…..how is it possible to be hyper-individualistic and a Roman Catholic at the same time? Is that where the insanity enters? As for Harper..the NDP have raised more money toward the next election than the UCP. Then there is the newly formed “People’s Party” in Medicine Hat to deal with. Personally thinking, Notly may just win once again. Many are re-thinking her. Anyong

For those of you who may not know, Trudeau recently gave Alberta 24 billion dollars from equalization 2021. Humpty Dumpty is laughing all the way to the bank maybe? Newfoundland who has been paying into equalization for years, received nothing. And, for those of you who do not know, the country of Newfoundland kept the West from starving to death during the Great Depression by sending salted fish to the West for cost. Yes Mr Kenney, a true story while Newfoundland is hurting a lot more than Alberta at this present time. Anyong

Having lived with Kenney, Anyong, I suspect that many Albertans are willing to give Notley another shot at government.

Newfoundlanders like to remind Canadians that the Federation has counted on them many times, Anyong.

Newfoundlanders like remind Canadians that the Federation has counted on them many times. When was the last you heard any thing in the news about NL? Anyong

All the time, Anyong. The province's premier is a doctor. So is his wife. She recently traveled to Ontario with a group of medical professionals to help during the pandemic.