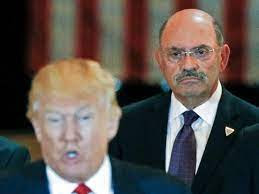 The indictment in New York has been unsealed. Dana Milbank writes:

The charges in New York against the Trump Organization and CFO Allen Weisselberg are extensive and serious. Scheme to Defraud. Conspiracy. Grand Larceny. Criminal Tax Fraud. Offering a False Instrument. Falsifying of Business Records. There were 15 counts in all, and New York prosecutors left hints that this is but an amuse-bouche compared to what’s coming. There were references to unnamed “other executives” compensated the same way Weisselberg was, “others” who implemented the fraudulent scheme, “including unindicted co-conspirator #1.”

The alleged scheme was straightforward, if sleazy: Weisselberg, like other Trump executives, was paid “off the books” in the form of rent payments, private school tuition, luxury-car leases, end-of-year cash payments disguised as “Holiday Entertainment,” and new beds, televisions, carpeting and furniture. The indictment makes clear the Trump executives knew they were doing wrong and tried to hide it: “On or about September 2016, Allen Weisselberg directed a staff member in the accounting department to remove the notations ‘Per Allen Weisselberg’ from the entries in Donald J. Trump’s Detail General Ledger relating to tuition payments paid on Weisselberg’s behalf to his family members’ private school.”

There is nothing surprising in any of this:

What’s most remarkable about the indictment is how unremarkable it is. Fraud? Conspiracy? Falsifying? Anybody who has lived through the past five years knows that this is Trump’s M.O. He ran the country with an endless series of falsifications, conspiracies and frauds. He ran his charity as a personal piggy bank. The surprising thing would be if Trump hadn’t run his business the same way.

The frauds and falsehoods of the Trump presidency led hundreds of thousands of Americans needlessly to lose their lives and provoked the worst attack on the U.S. Capitol since the War of 1812. Compared to that, the scheme alleged by prosecutors is small potatoes: $1.76 million in indirect compensation to Weisselberg, translating to just over $1 million stolen from the U.S. and New York city and state treasuries, and the taxpayers. Even if the case expands to other executives and other schemes, even if the entire Trump Organization turned out to be an Enron-style shell game, the damage done would be a pittance compared to the damage done by his presidency, and the much greater damage that could be done by another.

But, as it always is with Trump, there is more to come. This is only the beginning.

There's more to come alright. Trump has some $440 million in personally guaranteed loans coming due next year. Each loan has a standard clause requiring that accurate books be kept. With prosecutors alleging the Trump Org bookkeeping is fraudulent, the lenders can demand to go over the books themselves and if they find shady practices call the loans early.

That's why Trump needed the presidency so badly. It allowed him to keep prosecutors and creditors at bay and arrange corrupt financing, like Jared did when he shook down Qatar for a $1 billion bailout of his failing building on 5th Avenue. While I still believe Trump will never see the inside of a jail cell, he is going to go through some things financially. The Trump brand is now toxic and the Trump Org is likely finished.

Trump may never go to jail, Cap. But he can go bankrupt again. Only, this time, no one will rescue him.

Unfortunately, Owen, the Former Presidents Act will ensure that Trump is well cared for no matter what happens to his companies.

Trump knows how to look after No. 1, Cap.

Many Americans are looking forward the Celebration of Life that will attend his State Funeral. MAGA tee-shirts will be worn at half-assed.

And perhaps they'll sing "Hail To The Thief" John.

From the several reports of Trump's mental decline, he may not be a significant factor much longer. The stresses of this litigation, especially if prosecutors close in on Trump personally and his kids, could prove more than he can handle.

The first indictment speaks of a practice of tax evasion and fraud over the previous 16 years. That's institutional grade tax evasion and fraud. Apparently the guy who prepared the family's tax returns took an immunity deal in exchange for dishing the dirt to a grand jury. He would have grassed on Allen Weisselberg. That guy is believed to be the "unindicted co-conspirator 1."

The Sins of the Fathers are being visited on their children, Mound.