The March Of The Morons 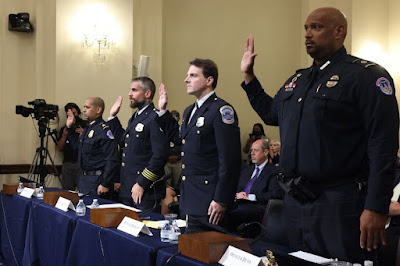 Yesterday, as four police officers testified before the House Select Committee on the insurrecton, six Republicans marched to the justice department and held a news conference. Dana Milbank writes:

Six Republican members of the House, escorted by a man in a giant Trump costume bearing the message “TRUMP WON,” marched on the Justice Department Tuesday afternoon to speak up for those they called “political prisoners” awaiting trial for their roles in the insurrection.

“These are not unruly or dangerous, violent criminals,” Rep. Paul Gosar (Ariz.) proclaimed at a news conference outside DOJ headquarters. “These are political prisoners who are now being persecuted and bearing the pain of unjust suffering.”

Rep. Louie Gohmert (Tex.) speculated that “we have political prisoners here in America.”

They distributed copies of a letter alleging the Jan. 6 defendants had been denied “potentially exculpatory evidence” and subjected to “cruel and unusual punishment.” Their supporters waved signs proclaiming “Free the Jan. 6 Political Prisoners,” and “Jan. 6 Was an Inside Job.”

Their argument was diametrically opposed to the testimony of the police officers -- and the video evidence which supported their testimony:

The half-dozen lawmakers, including Matt Gaetz of Florida and Marjorie Taylor Greene of Georgia, made explicit what has become more obvious by the day: Republicans stand with those who attempted a violent coup on Jan. 6. And it’s not just the wingnuts. House Republican leaders held a news conference before the hearing, blaming Jan. 6 not on seditionists but on Capitol Police and, particularly, House Speaker Nancy Pelosi.

With the Capitol Dome behind her, Rep. Elise Stefanik (N.Y.), the House Republican conference chair, proclaimed: “The American people deserve to know the truth: that Nancy Pelosi bears responsibility, as speaker of the House, for the tragedy that occurred on Jan. 6.” Stefanik charged that Pelosi “doesn’t want a fair or bipartisan investigation.”

With the exception of the two Republicans who sit on the committee -- Liz Cheney and Adam Kinsinger  --, it's clear that the Republican Party is a collection of morons. And the theatrics at the justice department was simply a March of the Morons.

Email ThisBlogThis!Share to TwitterShare to FacebookShare to Pinterest
Labels: The House Select Committee

Most of these Republican jackasses are well-educated - Gosar has a dentistry degree; Gohmer, Gaetz and Stefanic have law degrees; and even MTG has a bachelor of business degree. These are people of above average intelligence with agency. They're not morons; they're evil.

You're absolutely right, Cap. Higher education does not guarantee a good conscience.

The contrast between the sombre, emotional testimony of the Capitol police officers and the clown brigade know as the Republican Party could not be greater, Owen. A shame so many can't see that.

What amazes me is how these well-educated Republicans are absolutely certain they will suffer no consequences from it. They seem to know that their electoral support is solid. In other words they know that they have the backing of a grubby constituency that is partly Gullibillies, those who'll believe anything, and a more intelligent contingent who know they're lying but don't care so long as these Reps are the defenders of white privilege, holding the demographic wave at bay.

These congressmen are counting on this malignant dynamic to restore Republican control of the Senate and maybe even the House in the mid-terms. These outlandish lies are merely the lingua franca of this transaction.

The old saw, "There are none so blind as they who will not see" applies, Lorne. And it's painful to watch.

They're betting that history will hold true, Mound. And they will do anything to achieve power. Cap is right. They're evil.

Its pretty obvious to me that these people may be "well-educated" but from their actions, they certainly haven't learned anything from that education, otherwise one would have to conclude that they have a malignancy about them that is incurable. How on earth do these Repugs rationalize their actions with their so-called "christian" values? (I refuse to use a capital "C" when describing these confirmed thugs.)

Their education may be a mile long but it's an inch deep, Lulymay. Quite simply, they missed the point.

Max Boot has a column today dealing with how belief has triumphed over knowledge in Republican ranks from the base all the way to the presidency. On some issues such as the climate emergency and Covid-19 this "perversion" (MB's term) is already costing lives and promises to bring on much greater devastation in the years ahead. It is also the foundation for everything from QAnon to the Big Lie.

To me, this has deep roots, going at least as far back as the witch hunting era in England and colonial America.

Boot is an interesting case, Mound. He used to be a rock-solid REpblican. But he understands how the Puritans went wrong.

Not so much the Puritans, Owen, as the Germans. Max Boot, David Frum, Jennifer Rubin, Bill Kristol and Thomas Friedman are all prominent Jewish Republicans who broke with the party once the reek of fascism could no longer be denied. Makes me wonder what's wrong with David Brooks' nose.

An interesting comment, Cap. The folks you mention surely know what it's like to be an outsider. Perhaps that experience has eluded Brooks.

.. I experience all this 'news' peripherally on television in the evening
Daytime I peruse myriad web sources when I have time
A note - the Boss switched us to a contemporary Rogers account
partly for her business internet needs
so along with BBC, PBS, I see Al Jazeera etc etc in the evening
Alberta's village scumbag Jason barely gets a mention
or Ontario's village idiot Doug Ford

So presumably if Russian Backfire bombers were over the Capital
they wouldn't have paid any attention ? Caught it on the news later
These people lie like they breathe
All Star level bombast.. ie 'all hat, no cattle'

The evidence is right in front of their noses, sal. But they close their eyes.