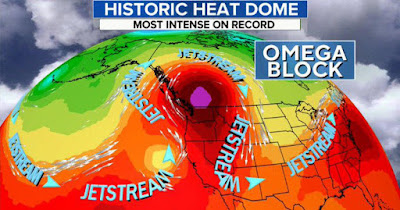 Rebecca Gordon reports that life under the heat dome is pretty nasty:

In San Francisco, we’re finally starting to put away our masks. With 74% of the city’s residents over 12 fully vaccinated, for the first time in more than a year we’re enjoying walking, shopping, and eating out, our faces naked. So I was startled when my partner reminded me that we need to buy masks again very soon — N95 masks, that is. The California wildfire season has already begun, earlier than ever, and we’ll need to protect our lungs during the months to come from the fine particulates carried in the wildfire smoke that’s been engulfing this city in recent years.

I was in Reno last September, so I missed the morning when San Franciscans awoke to apocalyptic orange skies, the air freighted with smoke from burning forests elsewhere in the state. The air then was bad enough even in the high mountain valley of Reno. At that point, we’d already experienced “very unhealthy” purple-zone air quality for days. Still, it was nothing like the photos that could have been from Mars then emerging from the Bay Area. I have a bad feeling that I may get my chance to experience the same phenomenon in 2021 — and, as the fires across California have started so much earlier, probably sooner than September.

Heat records have been broken all over the Pacific Northwest. Portland topped records for three days running, culminating with a 116-degree day on June 28th; Seattle hit a high of 108, which the Washington Post reported “was 34 degrees above the normal high of 74 and higher than the all-time heat record in Washington, D.C., among many other cities much farther to its south.”

With the heat comes a rise in “sudden and unexpected” deaths. Hundreds have died in Oregon and Washington and, according to the British Columbia coroner, at least 300 in her state — almost double the average number for that time period.

And the people who suffer the most are the poor:

Just as the coronavirus has disproportionately ravaged black and brown communities (as well as poor nations around the world), climate-change-driven heat waves, according to a recent University of North Carolina study reported by the BBC, mean that “black people living in most U.S. cities are subject to double the level of heat stress as their white counterparts.” This is the result not just of poverty, but of residential segregation, which leaves urban BIPOC (black, indigenous, and other people of color) communities in a city’s worst “heat islands” — the areas containing the most concrete, the most asphalt, and the least vegetation — and which therefore attract and retain the most heat.

The costs of inequality keep rising.

Email ThisBlogThis!Share to TwitterShare to FacebookShare to Pinterest
Labels: COVID And Climate Change

I'm amazed at how many people still deny climate change. I'm not talking about the old hedge that says climate change is real but not connected to human activity. I'm talking the unadulterated climate change is a Marxist hoax line. Death Valley hits its highest temperature ever, forests are burning like never before, and people put it all down to not sweeping pine needles or something.

Meanwhile, those who claim to "get it" still won't do anything if it means turning off the government subsidies to profitable oil and gas companies, and the irresponsible banks and pension funds that stand behind them. Instead, as things return to a post-pandemic normal, we see the price of gas rising, and with it, renewed hope for profits in the tarsands. This won't end well.

"those who claim to 'get it' still won't do anything" I assume Cap is referring to the current and next prime minister of Canada, the Rt. Hon. J. Trudeau.

What mystifies me is how the Liberal faithful reconcile the reality of the climate emergency with their ongoing support for a party that is allowing the clock to run out on our remaining options for mitigation and adaptation? What kind of state of denial is required for that?

Are we witnessing electoral cognitive dissonance?

What state of denial is needed, Mound? I won’t pretend the Liberals have done enough on the climate change front, but they have done more than any other government we’ve had so far, and more to the point, they remain light years ahead of their most likely replacement, the party that this very year couldn’t even pass a resolution that climate change is real. And who is going to do better? The Greens are imploding. Horgan and Notley have shown that the NDP aren’t any better than Trudeau even if Singh could pull off some kind of miracle of electoral success. It may not be the most pleasing scenario, but the reason Trudeau is still the most likely to win the next election is because he and the Liberals remain our best option at the moment.

I think that The Mound would agree with you, BJ -- grudgingly.